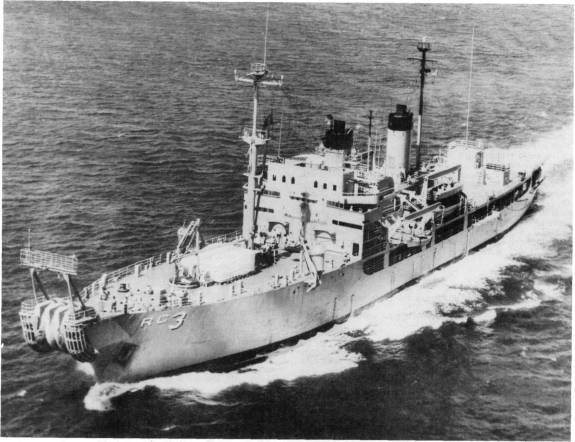 In Greek mythology, the god of winds.

Following fitting out and conversion at the Boston Navy Yard, Turandot. made her shakedown cruise in the Chesapeake Bay in July 1945. After undergoing availability at Norfolk, the new attack cargo ship took on passengers and cargo; then departed Hampton Roads on 24 July, bound for the Canal Zone. She transited the Panama Canal on 30 July and, early the next day, rendezvoused with Barbero (SS-317) for exercises en route to the Hawaiian Islands. On 10 August, she parted company with the submarine and made her way independently to Oahu, arriving at Pearl Harbor on 14 August 1945.

After discharging her cargo, she embarked 172 Army troops and departed the Hawaiian Islands on 7 September, setting her course for the New Hebrides. She arrived at Espiritu Santo on the 17th, discharged her passengers, loaded cargo, and embarked elements of the 85th Construction Battalion.

On 22 September, she got underway for the Marshalls. After fueling at Eniwetok, she continued on and arrived at Wake Island on 6 October. The following day, she discharged her cargo and passengers and returned to Eniwetok to begin "Magic-Carpet" duties, carrying troops back to the United States. She embarked more than 600 veterans, then got underway on 13 October and steamed via a great circle route to California. On Friday, 26 October, she entered San Pedro Harbor and disembarked her happy passengers. After voyage repairs at Terminal Island, she again got underway on 3 November, steaming for the Marianas. On the 19th, Turandot arrived at Saipan where she took on board more than a thousand returning troops. The attack transport departed Saipan on the 27th and completed the crossing at San Pedro on 12 December.

Repairs occupied most of the remainder of the month, Turandot opened the new year with a voyage to San Diego; then, on the 24th, continued southward to the Panama Canal and into the Atlantic. On 5 February, she arrived at Hampton Roads where she was decommissioned on 21 March 1946. Turandot was transferred to the Maritime Commission for disposal on 25 June 1946, and her name was struck from the Navy list on 17 April 1947.

On 4 November 1954, Turandot, was reacquired by the Navy for conversion to a cable repair ship. Modified for her new sion at Baltimore, Md., by the Bethlehem Steel Co., she was renamed Aeolus and redesignated ARC-3 on 17 March 1955. Aeolus was placed in commission at Baltimore on 14 May 1955, Comdr. Merrill M. Sanford in command

The ship spent almost a year operating along the Atlantic coast and in the West Indies, first completing her shakedown cruise and, later, engaging in cable and survey duty. On 27 February 1956, she stood out of Norfolk on her way to an extended tour of duty in the Pacific Ocean. Aeolus transited the Panama Canal on 3 March and commenced three years of operations based at San Francisco, Calif. She concluded that assignment on 2 March 1959 when she got underway from San Francisco to return to the Atlantic. Steaming by way of the Panama Canal and Norfolk, Aeolus arrived in Portsmouth, N.H., her new home port, late in March 1959.

Over the next three years, the cable repair ship operated from Portsmouth performing work along the east coast and in the West Indies. In June 1962, she voyaged to the Pacific once more for what was to have been a three-month temporary assignment out of San Francisco. Unforeseen events, however, extended her stay until December. In September when she first set out on the voyage home, Aeolus suffered damage in a collision with a merchant oil tanker. By late October, she completed repairs to that damage and headed for the Panama Canal again only to be recalled to perform some emergency cable work. Finally, after a six-hour stop at San Francisco for provisions, the ship embarked upon the voyage back to Portsmouth on 11 December. After celebrating Christmas 1962 at sea in the Atlantic, she moored to pierside at the Portsmouth (N.H.) Naval Shipyard on 28 December.

Following six weeks of leave and upkeep, Aeolus moved to the Boston Naval Shipyard in mid-February for regular overhaul. Completing repairs and post-overhaul shakedown training by the end of the first week in June, she resumed operations from Portsmouth that occupied her time until the summer of 1965. At that time, she returned to the Pacific Ocean for a temporary assignment in the Aleutian Islands of several months duration. The cable repair ship arrived back in Portsmouth, N.H., in November of 1965 and resumed operations in the Atlantic Ocean. That employment lasted almost a year and included port visits to Rota, Spain, and Lisbon, Portugal, in August of 1966. Between October and December of 1966, Aeolus carried out another temporary assignment in the Pacific while 1967 brought duty limited to the northern Atlantic. In May of 1968, the ship passed through the Panama Canal again for special operations in the Pacific Ocean. That duty took up the remainder of 1968. Aeolus arrived back in Portsmouth, N.H., on 12 January 1969.

The cable repair ship's commissioned service continued for almost five more years and included another visit to European waters during the summer of 1973. She returned to Portsmouth, N.H., from that voyage on 21 September 1973 and began preparations for her transfer to the Military Sealift Command (MSC). On 1 October 1973, Aeolus was decommissioned and turned over to MSC to be operated by a civil service crew. She continued to serve actively as USNS Aeolus until May of 1985 at which time she was laid up with the Maritime Administration's National Defense Reserve Fleet at its James River (Va.) facility. As of the middle of 1987, she was still there.