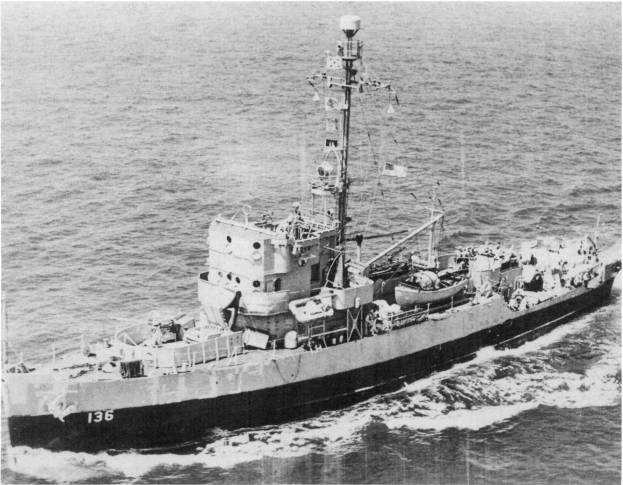 The minesweeper departed Tampa on 23 April 1943 and conducted shakedown training in the Gulf of Mexico before heading for Hampton Roads, Va., on 23 June. Admirable operated out of the amphibious base at Little Creek for five months of training in antisubmarine warfare, mine-laying, and minesweeping techniques. After upkeep and outfitting, she departed Norfolk on 28 November in company with the internal combustion engine repair ship Luzon (ARG-2) for duty in the Pacific. Transiting the Panama Canal on 8 December, the minesweeper continued on to San Diego where she moored on 18 December. In January 1944, following tests at the West Coast Sound School, she received orders to proceed independently to Adak Island, Alaska. During the voyage, Admirable encountered heavy seas which damaged her sonar gear. Following her arrival in Kuluk Bay, Adak, on 6 February, she was drydocked for repairs.

On 13 February 1944, Admirable was assigned to Task Group (TG) 91.2. She operated out of Adak, escorting merchant and troop ships to such ports as Kodiak, Dutch Harbor, Amchitka, Kiska, Cold Bay, and Attu. On four occasions during her 18-month tour in the Aleutians, Admirable went alongside the destroyer tender Black Hawk (AD-9) in Adak for brief availabilities to repair damages caused by the cold weather, heavy seas, and the violent, gusting winds known as "williwaws."

In July 1944, the minesweeper began to clear the minefield in Chiniak Bay off Kodiak Island. She was the lead ship of a group-- composed of minesweeper Augury (AM-149), coastal minesweepers Agile (AMc-111) and Affray (AMc-112), and the motor minesweeperYMS-285--that, on 2 August, began a sweep of the channel to St. Paul's Harbor. The minesweepers then established patrols outside the harbor to await the arrival of President Franklin D. Roosevelt on board the heavy cruiser Baltimore (CA-68). The President had left San Diego on 14 July, steamed to Pearl Harbor to meet with General Douglas MacArthur and Admiral Chester W. Nimitz to discuss plans for the invasion of the Philippines, and stopped at Kodiak on 7 August. Baltimore pulled out of St. Paul's Harbor the same day, and the President continued his journey back to the United States on board the destroyer Cummings (DD-365). Admirable resumed escort duty and continued that work into March 1945.

On 14 March 1945, the minesweeper's commanding officer was designated officer in tactical command of eight ships and all aircraft participating in a combined air-surface attack on a fictitious submarine in Kuluk Bay. The minesweeper then returned to her escort duties until May, when she stopped in Dutch Harbor for repairs preparatory to transfer under the lend-lease program. Because of the continual beating of the heavy seas, 12 feet of the forward end of each of her bilge keels as well as her sonar gear were replaced.

Rear Admiral Boris D. Popov of the Soviet Navy inspected the ship on 30 May 1945 and accepted her for transfer to his country. On 18 June, a Russian crew reported on board to train for one month in gunnery, engineering, and minesweeping procedures. Admirable was decommissioned and transferred to the Soviet Navy on 19 July 1945. She served in the Soviet Navy as a minesweeper (tralshik) and was designated T-521.

The Soviet Union never returned her to the U.S. Navy. Reclassified MSF-136 on 7 February 1955, she was carried on the U.S. Naval Vessel Register until stricken on 1 January 1983.