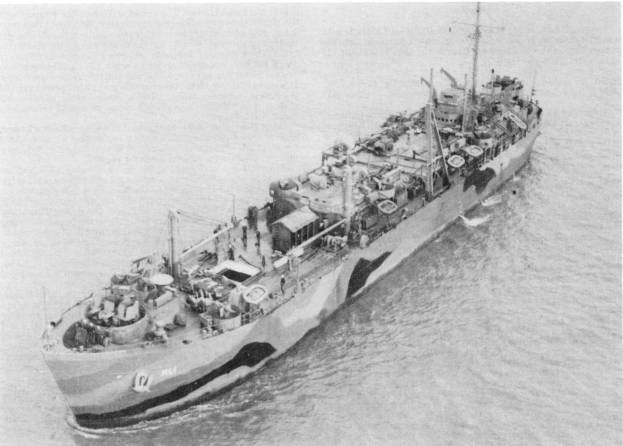 Caption: Achelous (ARL-1), 19 February 1945, steams beneath the Cooper River Bridge, Charleston, S.C., in Measure 31 camouflage (dull black, ocean green and Navy green). Note the large A-frame on the starboard side, for hoisting damaged landing craft on board for repairs, and the booms stepped port and starboard for handling cargo. (19-N-78643)

A Greek river god whose name has been given to the largest river in Greece. Achelous, the eldest son of Oceanus and that titan's sister, Tethys, is usually depicted as a bull with a human head.

Later that day, command of the landing craft repair ship passed to Lt. Walter Ringies. Achelous held shakedown in Chesapeake Bay; stopped at Norfolk, Va., on 22 April to take on supplies on 28 April; and sailed on the 28th with a convoy bound for North Africa. She paused in Bermuda from 2 to 9 May and arrived in Oran, Algeria, on 26 May.

Achelous moved to Bizerte, Tunisia, on 1 June and remained there until 14 July providing varied services to landing craft. Following the Allied invasion of Sicily, Achelous moored at Licata, Sicily, from 15 July through 14 August performing repair work. She returned to Bizerte on 15 August and, in the next three days, underwent two enemy air raids. During the second raid, Achelous' guns assisted in downing two German planes.

Achelous spent one week in mid-September at Palermo, Sicily.

She got underway with Convoy UGS-19 on 16 October; reached Port Said, Egypt, on 23 October; and transited the Suez Canal on 25 October. The repair ship then headed for Massawa, Italian Eritrea, where she arrived on 31 October. The next day, she entered a British-owned floating drydock at Massawa. The ship left the drydock on 4 November and got underway for India. She arrived at Calcutta in early December and spent approximately one month providing services in the China-Burma-India theater.

In early 1944, Achelous left India and sailed to the Mediterranean to support operations along the Italian coast. She remained at these duties for seven months. In July, the landing craft repair ship began preparations for the assault on the southern coast of France. In mid-August, she dropped anchor off the French coast and set up a pontoon drydock to service landing craft used in the invasion. These duties occupied her through most of 1944.

Late in the year, the repair ship was reassigned to the Pacific and began her voyage via the Strait of Gibraltar and the Panama Canal to her new area of operations. She transited the Panama Canal on 7 March 1945 and proceeded to Eniwetok, where she arrived on 24 April. Achelous then was assigned to support the invasion and occupation of Okinawa, her last combat operation of World War II.

Following the war, Achelous returned to the west coast. She was placed out of commission in reserve in January 1947 and berthed in the Columbia River Group of the Pacific Reserve Fleet. Achelous' name was struck from the Navy list on 1 June 1973. and the ship was sold on 21 January 1974 to Overseas Shipyard, Ltd, of Hong Kong for scrapping.