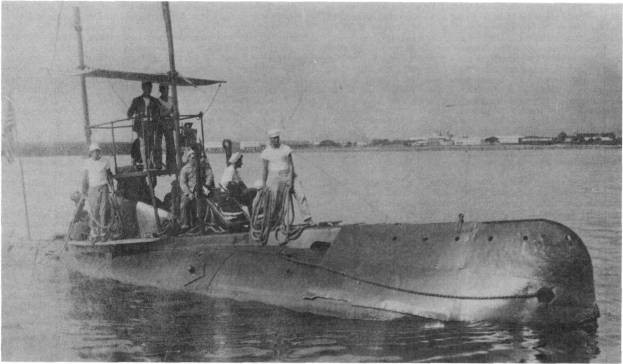 Caption: A-4 (Submarine No. 5) preparing to moor, Manila Bay, circa 1912. Note the casual nature of the uniforms of the crew, and the generally diminutive size of this craft. (NH 90186)

The submarine torpedo boat A-4 was originally laid down as Moccasin (Submarine Torpedo Boat No. 5) on 8 November 1900 at Elizabethport, N.J., by the Crescent Shipyard of Lewis Nixon, a subcontractor for the John P. Holland Torpedo Boat Co. of New York; launched on 20 August 1901; sponsored by a Mrs. Rice; and commissioned at the Holland yard at New Suffolk, N.Y., on 17 January 1903 Ens. Frank L. Pinney in command.

Assigned to duty at the Naval Torpedo Station at Newport, R.I., Moccasin operated locally on principally training and experimental activities until assigned to the Reserve Torpedo Flotilla at Norfolk on 15 June 1904, in which unit she remained inactive for the next half decade. On 20 July 1909, the submarine torpedo boat was loaded on board the collier, Caesar, which sailed soon thereafter for the Philippine Islands. Moccasin's sistership, Adder (Submarine Torpedo Boat No. 3) was on board as deck cargo as well, lashed to the auxiliary's forward well deck. Arriving at Olongapo on 1 October, Moccasin was launched on 7 October. Recommissioned on 10 February 1910, the submarine torpedo boat was assigned to the First Submarine Division, Asiatic Torpedo Fleet, basing on the Manila area.

Early in the period she was operating with the Asiatic Fleet, Moccasin was renamed A-4 (Submarine Torpedo Boat No. 5) on 17 November 1911. During World War I, like her sisterships, she patrolled the entrance to Manila Bay and convoyed ships moving put of local waters. Later placed in reserve, A-4 was decommissioned at Cavite on 12 December 1919.

Designated as a target vessel, A-4 (which had been assigned the identification number SS-5 on 17 July 1920) was stricken from the Naval Vessel Register on 16 January 1922.