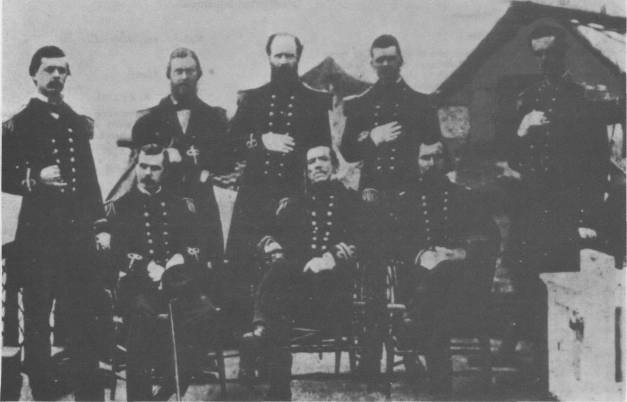 CSS Sumter was originally the bark-rigged steamer Habana of New Orleans, built at Philadelphia in 1859 for McConnell's New Orleans & Havana Line. Purchased at New Orleans in April 1861 and converted to a cruiser by Capt. Raphael Semmes, CSN, Sumter was commissioned there 3 June and put to sea on the 30th to strike at Union shipping. Eluding sloop-of-war Brooklyn in hot pursuit, Sumter cruised the West Indies and south to Maranhao, Brazil, capturing several prizes. Returned to Martinique, she was discovered in the act of coaling by USS Iroquois; Capt. J. S. Palmer, USN, promptly protested to local authorities and took position to intercept Sumter leaving St. Pierre. But 9 days later the raider escaped by night and steered for Spain, anchoring at Cadiz, 4 January 1862. Allowed only to make necessary repairs there, without refueling, she was forced to run for Gibraltar and lay up. Disarmed and sold at auction 19 December 1862 to the Fraser-Trenholm interests, Sumter quietly continued her service to the Confederacy under British colors as the blockade runner Gibraltar of Liverpool.

Though her career as a fighting ship had lasted scarcely six months, Sumter .had taken 18 prizes, of which she burned 8, released or bonded 9; only one was recaptured. The diversion of Federal blockade ships to hunt her down had been in itself no insignificant service to the Confederate cause.

As Gibraltar, she ran at least once into Wilmington, N. C., under Capt. E. C. Reid, a Southerner. He sailed from Liverpool 3 July 1863 with a pair of 22-ton Blakely guns and other particularly valuable munitions, returning with a full load of cotton. The beginning of this voyage is recorded only because the U.S. Consul at the British port passionately protested Gibraltar's being allowed to sail-ostensibly for Nassau-days before formal customs clearance: "She is one of the privileged class and not held down like other vessels to strict rules and made to conform to regulations." The arrival at Wilmington is also accidental matter of record today because of the troop transport Sumter tragedy at Charleston the same summer-which, until November, Admiral Dahlgren's intelligence understandably confused with the former cruiser Sumter, now Gibraltar.

Mr. Trenholm's son-in-law long maintained Sumter finally "went down in a gale near the spot where the Alabama was sunk," but supplied no date; one source suggests 1867. The last official report of her seems to have been by the U.S. Consul at Liverpool, 10 July 1864: "The pirate Sumter (called Gibraltar)is laid up at Birkenhead."

The existence of this James River tug, "about the size of the Teaser,"mounting either a smooth bore or rifled 20-pounder or both, on pivots, is not confirmed by a Confederate source. The alleged Sumter and three similar small tugs, in part identified as Raleigh and Patrick Henry, were operating in defense of Richmond according to Commodore Charles Wilkes, reporting to Secretary of the Navy Welles from USS Wachusett, 12 September 1862, the only mention of her in published official records.

This transport with high-pressure steam plant was approaching completion near Charleston the end of March 1863-whether newbuilt or refitted remains uncertain. Sumter is mentioned relatively frequently in official records as being particularly useful in the tidal rivers of South Carolina because of her light draft. Apparently under Army control, she rendered the Confederacy yeoman service as a troop and munitions carrier, principally in the Stono River and the general area about Charleston, and was not infrequently a desirable target for Federal monitors and sharpshooters besieging the city throughout August. On the 30th, Sumter offloaded the 27th and 28th Georgia Regiments, an artillery company and stores at Morris Island, embarking the 20th South Carolina and 23d Georgia Regiments with another artillery company-740 in all- for Ft. Gregg on Sullivan's Island. The Military District Commander, Brig. Gen. Roswell S. Ripley, CSA, reporting to Chief of Staff, 22 September, recounts the tragedy which ensued that August day: "So much time had been taken up, however, [loading troops] that the tide had fallen so low as to necessitate going by the main channel, and unfortunately the necessity had not been provided against by giving information to and establishing a signal with the batteries on Sullivan's Island. The steamer had run safely to the enemy's fleet and was coming up the channel when, being observed from Ft. Moultrie, fire was opened upon her. Before the officers in charge had learned this error several shots took effect, sinking the boat and causing the loss of arms and equipments. The troops on board were rescued by the garrison of Ft. Sumter, under Col. Alfred Rhett, and boats sent down by the Navy. Eight men were reported missing the next morning ..." The death toll came to 40. Sumter's wreck became a landmark used in target practice for some days afterward.