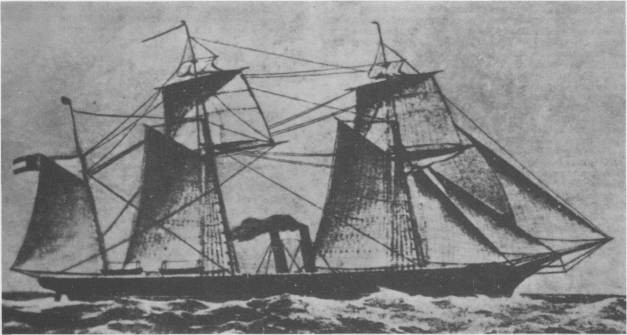 The pilot schooner Florida was not issued a letter of marque but gave better account of herself as a "junior privateer" than did many a larger vessel better armed after formal commissioning. Maj. W. Bevershaw Thompson, CSA, chief engineer of the Coast Defense Department fortifying Hatteras Inlet approaches, in a report from Fort Hatteras, N.C. to the Military Secretary, Col. Warren Winslow, 25 July 1861 described her: "We have also a saucy-looking little pilot schooner, the Florida, mounting one 6-pounder rifled cannon. She captured a prize 2 days since, took her crew out, and sent her in with her own men. A U.S. Government steamer gave chase to the prize, and they were obliged to beach her near Nag's Head. She, of course, is a total loss." After this brief moment on stage during the early days of the war, history says no more of the enterprising pilot boat-privateer; it is impossible at this distance even to be sure that she was privately owned and not a North Carolina public vessel.

CSS Florida, built at Greenpoint N. Y. in 1859, was thrice considered for a gunboat before she became one. Contrary to previous interpretation of the official records, closer comparison of entries reveals that she did not serve the Mississippi River Defense Fleet as originally intended but became a Government-owned blockade runner; most authors have confused her with the Mobilian CSS Florida who did not receive her name Selma (q.v.) until July 1862. CSS Florida of New Orleans was one of 14 steamers of Charles Morgan's Southern Steamship Co. which Maj. Gen. Mansfield Lovell "impressed for public service" at New Orleans, 15 January 1862, acting- on Secretary of War Benjamin's orders.

The colorful Lt. Beverly Kennon, CSN, had sought her command but had to be content with Governor Moore. He nostalgically described Florida to a court of inquiry as "a very fast and a very handsome vessel indeed-.A direct-acting screw of about 100 horsepower-about the same size in all respects as the U.S. steam sloop Pocahontas.

Of the several ships of the same name, she apparently is the Florida who arrived at Havana 23 March 1862 with 1,000 bales of cotton. Attempting to repeat her success, she had loaded 211 bales in St. Joseph Bay near Pensacola when captured by Acting Master Elnathan Lewis with armed boats from US Bark Pursuit, 6 April.The boarders had just captured a sloop, Lafayette, at St. Andrew's, 20 miles below, and the latter's Captain Harrison volunteered to pilot Lewis' party on up to capture Florida. Surprised at 4 o'clock Sunday morning, Florida's crew were unable to fire their ship.

It later appeared that the pilot, chief mate, first and second engineers were Union sympathizers. Mr. Lewis, after running Florida aground twice and jettisoning 30 bales of cargo, found "it was impossible to bring her out without the assistance of the engineers, pilot, and mate; so rather than burn her he considered it prudent to bargain with them, and gave his word that they would receive $500.00 each. They were faithful."

In the 30-mile passage to the bar, Florida and Lafayette were almost recaptured by the Confederates on 8 April after Capt. R. L. Smith, CSA, and his company of dragoons had galloped 24 hours from Marianna, Fla. to intercept them off St. Andrew's. A ship's boat was ambushed with four casualties, one dead, but the prizes continued on to Key West. There, 19 April 1862, Commodore McKean reporting to Secretary Welles confirms that Florida had never been converted: "I have examined her, and find that her upper deck is too light to carry guns of any weight. I have not the means to strengthen her sufficiently, or I should retain and convert her into a gunboat." Despite this rejection, the U.S. Navy bought Florida from the Philadelphia prize court, 20 September, changed her name to Hendrick Hudson (q.v.) and placed 4, later 5, guns on board.

CS Cruiser Florida was built by the British firm of William C. Miller & Sons and purchased by the Confederacy from Fawcett, Preston & Co., also of Liverpool, who engined her. Known in the shipyard as Oreto and initially called by the Confederates Manassas, the first of the foreign-built commerce raiders was commissioned Florida; Union records long continued to refer to her as Oreto or to confuse her with Alabama although, fitted with two funnels, she was readily distinguishable from single-stacked Alabama.

Florida departed England 22 March 1862 for Nassau to coal and contrived to fill her bunkers, although entitled only to enough to make the nearest Confederate port. The Governor drew the line, however, at an attempted rendezvous with her tender in Nassau harbor; so she transferred stores and arms at isolated Green Cay. There she commissioned as Florida 17 August, with veteran Lt. John Newland Maffitt, CSN, in command. During her outfit, yellow fever raged among her crew, in 5 days reducing her effective force to one fireman and four deckhands. In desperate plight, she ran across to Cuba. There in Cardenas Maffitt too was stricken with the dread disease.

In this condition, against all probability, the intrepid Maffitt sailed her from Cardenas to Mobile. In an audacious dash the "Prince of Privateers" braved a hail of projectiles from the Union blockaders and raced through them to anchor beneath the guns of Ft. Morgan for a hero's welcome by Mobile. Florida had been unable to fight back not only because of sickness but because rammers, sights, beds, locks and quoins had, inadvertently, not been loaded in the Bahamas. Having taken stores and gun accessories she lacked, along with added crew members, Florida escaped to sea 16 January 1863.

After coaling at Nassau, she spent 6 months off North and South America and in the West Indies, with calls at neutral ports, all the while making captures and eluding the large Federal squadron pursuing her. (See also the exploits of Lieutenant Read under Clarence, Tacony, Archer and Caleb Gushing.)

Florida sailed 27 July from Bermuda for Brest, where she lay in the French Government dock from 23 August 1863 to 12 February 1864. There broken in health, Maffitt relinquished command to Lieutenant Morris. Departing for the West Indies, Florida bunkered at Barbados, although the 3 months specified by British law had not elapsed since last coaling at an Empire port. She then skirted the U.S. coast, sailed east to Teneriffe in the Canaries and thence to Bahia, 4 October 1864.

Anchored in the Brazilian haven, on 7 October Florida was caught defenseless in a night attack by Comdr. Napoleon Collins of USS Wachusett, while her captain was ashore with half his crew. Towed to sea, she was sent to the United States as a prize despite Brazil's protests at this violation of neutral rights.

At Newport News, 28 November 1864, Florida reached the end of her strange career when she sank in a collision with the USAT Alliance, a troop ferry, and thus could not be delivered to Brazil in satisfaction of the final court order. Commander Collins was court-martialed but won fame and eventual promotion for his daring.

Florida captured 37 prizes during her impressive career; her prizes Tacony and Clarence in turn took 23 more.