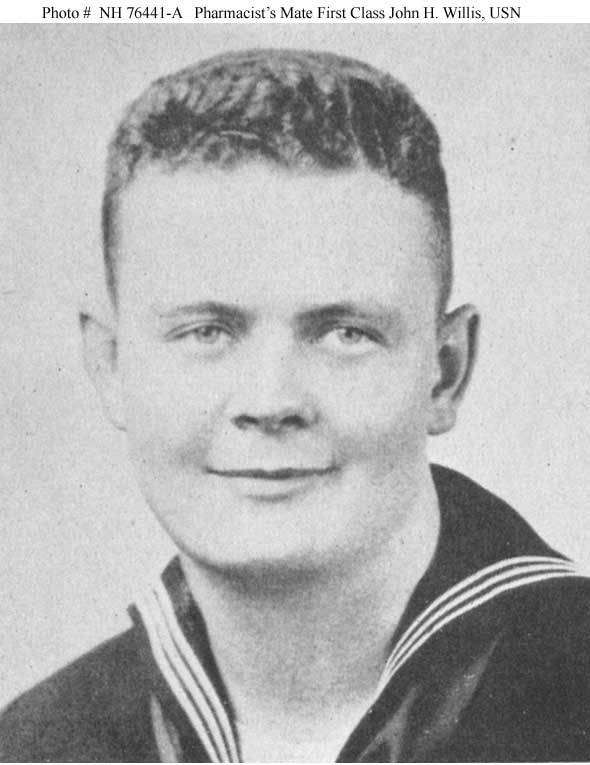 Description: Halftone reproduction of a photograph, copied from the official publication Medal of Honor, 1861-1949, The Navy, page 281. John H. Willis was awarded the Medal of Honor, posthumously, for conspicuous gallantry and intrepidity at the risk of his life on 28 February 1945, during the Battle of Iwo Jima. U.S. Naval History and Heritage Command Photograph.
Related Content

"For conspicuous gallantry and intrepidity at the risk of his life above and beyond the call of duty as Platoon Corpsman serving with the Third Battalion, Twenty-seventh Marines, FIFTH Marine Division, during operations against enemy Japanese forces on Iwo Jima, Volcano Islands, 28 February 1945. Constantly imperiled by artillery and mortar fire from strong and mutually supporting pillboxes and caves studding Hill 362 in the enemy's cross-island defenses, WILLIS resolutely administered first aid to the many Marines wounded during the furious close-in fighting until he himself was struck by shrapnel and was ordered back to the battle-aid station. Without waiting for official medical release, he quickly returned to his company and, during a savage hand-to-hand enemy counterattack, daringly advanced to the extreme front lines under mortar and sniper fire to aid a Marine lying wounded in a shell-hole. Completely unmindful of his own danger as the Japanese intensified their attack, WILLIS calmly continued to administer blood plasma to his patient, promptly returning the first hostile grenade which landed in the shell-hole while he was working and hurling back seven more in quick succession before the ninth one exploded in his hand and instantly killed him. By his great personal valor in saving others at the sacrifice of his own life, he inspired his companions, although terrifically outnumbered, to launch a fiercely determined attack and repulse the enemy force. His exceptional fortitude and courage in the peformance of duty reflect the highest credit upon WILLIS and the United States Naval Service. He gallantly gave his life for his country."