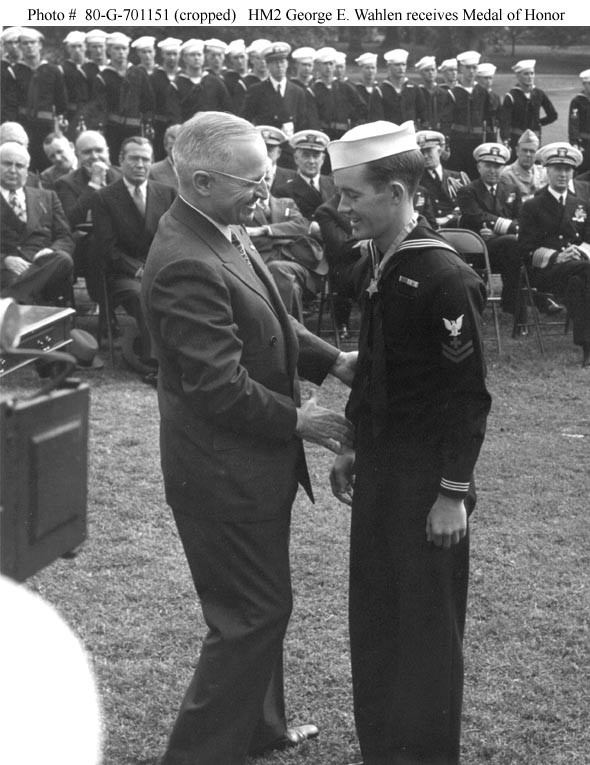 Description: Receives the Medal of Honor from President Harry S. Truman during Nimitz Day ceremonies at the White House on 5 October 1945. Among those in the background are (first row): Assistant Secretary of the Navy, Artemis Gates (visible just to left of President Truman); and and Fleet Admiral Ernest J. King, USN, (at far right). Official U.S. Navy Photograph, now in the collections of the National Archives.
Related Content

"For conspicuous gallantry and intrepidity at the risk of his life above and beyond the call of duty while serving with the Second Battalion, Twenty-sixth Marines, FIFTH Marine Division, during action against enemy Japanese forces on Iwo Jima in the Volcano Group on 3 March 1945. Painfully wounded in the bitter action on 26 February, WAHLEN remained on the battlefield, advancing well forward of the front lines to aid a wounded Marine and carrying him back to safety despite a terrific concentration of fire. Tireless in his ministrations, he consistently disregarded all danger to attend his fighting comrades as they fell under the devasting rain of shrapnel and bullets, and rendered prompt assistance to various elements of his combat group as required. When an adjacent platoon suffered heavy casualities, he defied the continuous pounding of heavy mortars and deadly fire of enemy rifles to care for the wounded, working rapidly in an area swept by constant fire and treating fourteen casualties before returning to his own platoon. Wounded again on 2 March, he gallantly refused evacuation, moving out with his company the following day in a furious assault across 600 yards of open terrain and repeatedly rendering medical aid while exposed to the blasting fury of powerful Japanese guns. Stout-hearted and indomitable, he persevered in his determined efforts as his unit waged fierce battle and, unable to walk after sustaining a third agonizing wound, resolutely crawled 50 yards to administer first aid to still another fallen fighter. By his dauntless fortitude and valor, WHALEN served as a constant inspiration and contributed vitally to the high morale of his company during critical phases of this strategically important engagement. His heroic spirit of self-sacrifice in the face of overwhelming enemy fire upheld the highest traditions of the United States Naval Service."