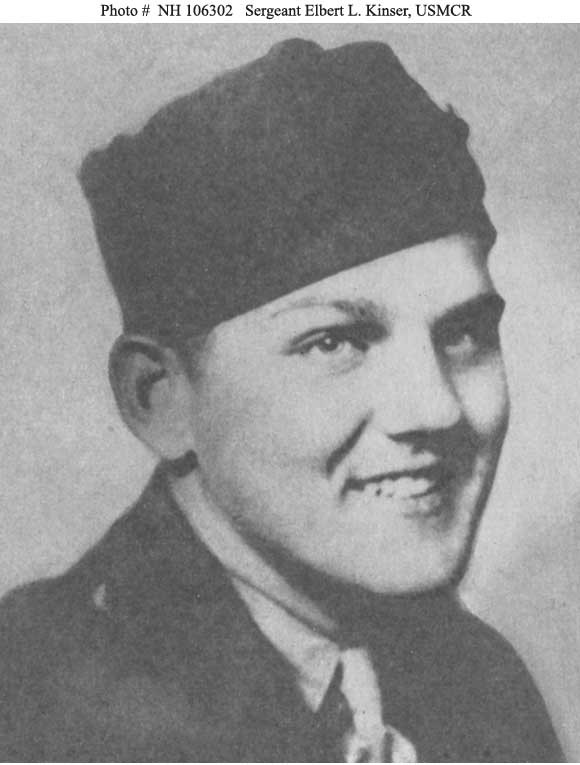 Description: Halftone reproduction of a photograph, copied from the official publication Medal of Honor, 1861-1949, The Navy, page 214. Elbert L. Kinser was posthumously awarded the Medal of Honor for conspicuous gallantry and intrepidity while acting as Leader of a Rifle Platoon serving with Company I, Third Battalion, First Marines, First Marine Division in action against the Japanese on Okinawa Shima in the Ryukyu Chain, 4 May 1945. U.S. Naval History and Heritage Command Photograph.
Related Content

"For conspicuous gallantry and intrepidity at the risk of his life above and beyond the call of duty while acting as Leader of a Rifle Platoon, serving with Company I, Third Battalion, First Marines, FIRST Marine Division, in action against Japanese forces on Okinawa Shima in the Ryukyu Chain, 4 May 1945. Taken under sudden, close attack by hostile troops entrenched on the reverse slope while moving up a strategic ridge along which his platoon was holding newly won positions, Sergeant Kinser engaged the enemy in a fierce hand-grenade battle. Quick to act when a Japanese grenade landed in the immediate vicinity, Sergeant Kinser unhesitatingly threw himself on the deadly missile, absorbing the full charge of the shattering explosion in his own body and thereby protecting his men from serious injury and possible death. Stout-hearted and indomitable, he had yielded his own chance of survival that his comrades might live to carry on the relentless battle against a fanatic enemy. His courage, cool decision and valiant spirit of self-sacrifice in the fact of certain death sustained and enhanced the highest traditions of the United States Naval Service. He gallantly gave his life for his country."