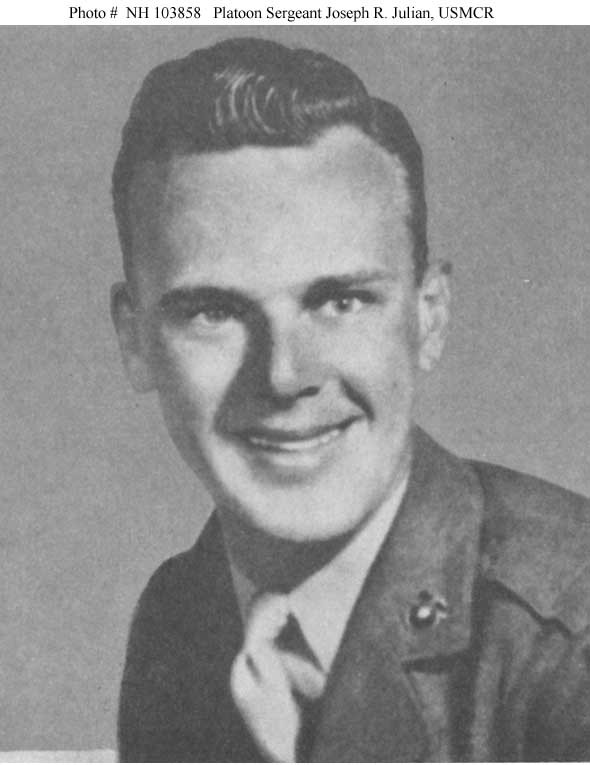 Description: Halftone reproduction of a photograph, copied from the official publication Medal of Honor, 1861-1949, The Navy, page 211. Joseph R. Julian received the Medal of Honor, posthumously, for conspicuous gallantry and intrepidity at the risk of his own life on 9 March 1945, during the Battle of Iwo Jima. U.S. Naval History and Heritage Command Photograph.
Related Content

Medal of Honor citation of Platoon Sergeant Joseph Rodolph Julian, USMCR (as printed in the official publication "Medal of Honor, 1861-1949, The Navy", page 211):

"For conspicuous gallantry and intrepidity at the risk of his life above and beyond the call of duty as a Platoon Sergeant serving with the First Battalion, Twenty-seventh Marines, FIFTH Marine Division, in action against enemy Japanese forces during the seizure of Iwo Jima in the Volcano Islands, 9 March 1945. Determined to force a break-through when Japanese troops occupying trenches and fortified positions on the left front laid down a terrific machine-gun and mortar barrage in a desperate effort to halt his company's advance, Platoon Sergeant Julian quickly established his platoon's guns in strategic supporting positions, and then, acting on his own initiative, fearlessly moved forward to execute a one-man assault on the nearest pillbox. Advancing alone, he hurled deadly demolitions and white phosphorus grenades into the emplacement, killing two of the enemy and driving the remaining five out into the adjoining trench system. Seizing a discarded rifle, he jumped into the trench and dispatched the five before they could make an escape. Intent on wiping out all resistence, he obtained more explosives and, accompanied by another Marine, again charged the hostile fortifications and knocked out two more cave positions. Immediately thereafter, he launched a bazooka attack unassisted, firing four rounds into one remaining pillbox and completely destroying it before he fell, mortally wounded by a vicious burst of enemy fire. Stout-hearted and indomitable, Platoon Sergeant Julian consistently disgregarded all personal danger and, by his bold decision, daring tactics, and relentless fighting spirit during a critical phase of the battle, contributed materially to the continued advance of his company and to the success of his division's operations in the sustained drive toward the conquest of this fiercely defended outpost of the Japanese Empire. His outstanding valor and unfaltering spirit of self-sacrifice throughout the bitter conflict sustained and enhanced the highest traditions of the United States Naval Service. He gallantly gave his life for his country."