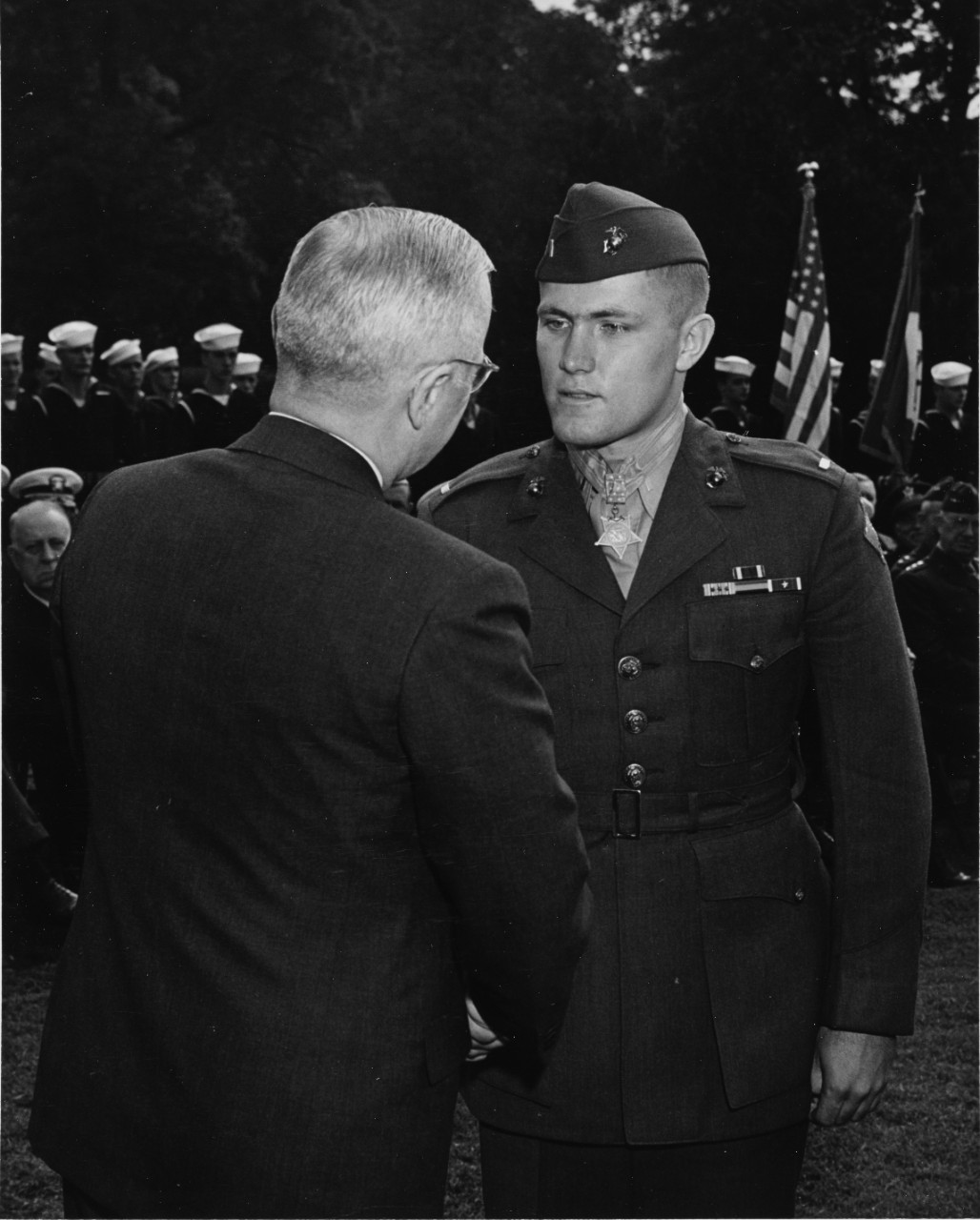 Description: President Harry S. Truman (left) and (right) Shaking hands after President Truman presented the Medal of Honor to Second Lieutenant Jackson during Nimitz Day Ceremonies at the White House, Washington, D.C. on 5 October 1945. When he performed the actions for which he received the award, on Peleliu Island, 18 September 1944, Jackson held the rank of Private First Class. Note: Lieutenant General Holland M. Smith, USMC, is in the extreme right background, seated to the right of Second Lieutenant Jackson's shoulder. Official U.S. Navy Photograph, now in the collections of the Naval History and Heritage Command.
Related Content

"For conspicuous gallantry and intrepidity at the risk of his life above and beyond the call of duty while serving with the Third Battalion, Seventh Marines, FIRST Marine Division, in action against enemy Japanese forces on the Island of Peleliu in the Palau Group, 18 September 1944. Boldly taking the initiative when his platoon's left flank advance was held up by the fire of Japanese troops concealed in strongly fortified positions, Second Lieutenant Jackson unhesitatingly proceeded forward of our lines and, courageously defying the heavy barrages, charged a large pillbox housing approximately 35 enemy soldiers. Pouring his automatic fire into the opening of the fixed installation to trap the occupying troops, he hurled white phosphorus grenades and explosive charges brought up by a fellow Marine, demolishing the pillbox and killing all of the enemy. Advancing alone under the continuous fire from other hostile emplacements, he employed similar means to smash two smaller positions in the immediate vicinity. Determined to crush the entire pocket of resistance although harassed on all sides by the shattering blasts of Japanese weapons and covered only by small rifle parties, he stormed one gun position after another, dealing death and destruction to the savagely fighting enemy in his inexorable drive against the remaining defenses, and succeeded in wiping out a total of 12 pillboxes and 50 Japanese soldiers. Stout-hearted and indomitable despite the terrific odds, Lieutenant Jackson resolutely maintained control of the platoon's left flank movement throughout his valiant one-man assault and, by his cool decision and relentless fighting spirit during a critical situation, contributed essentially to the complete annihilation of the enemy in the southern sector of the island. His gallant initiative and heroic conduct in the face of extreme peril reflect the highest credit upon Second Lieutenant Jackson and the United States Naval Service."

Note: Arthur J. Jackson's rank is given as "Second Lieutenant" and "Lieutenant" in this citation, as quoted from the source cited above. However, other versions of the citation give his rank as Private First Class, which was his correct rank on 18 September 1944.