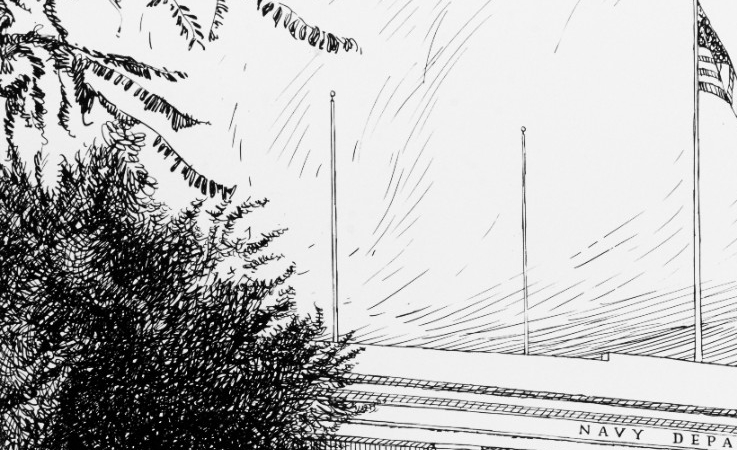 For more than five decades, the "Main Navy" and "Munitions" Buildings dominated the scenery along Constitution Avenue west of the Washington Monument, in the Northwest quadrant of Washington, D.C. Erected in 1918 as "temporary" office buildings to support the vastly expanded World War I military, they were so spacious and useful that it required a 1970 Presidential command to force their demolition.

Main Navy and Munitions were first occupied in August 1918, a few months before the end of the "Great War". They held some 14,000 Navy, Army and Civilian personnel when the fighting ended. Among their inhabitants were the Secretary of the Navy, the Chief of Naval Operations and their staffs. The Navy's high command remained there until after World War II, when it was transferred to the Pentagon. At the end of their long careers the two buildings were home to most of the Navy's material systems commands, and their abandonment helped to fill a good many new office buildings in nearby Northern Virginia. Also in residence were the Navy Department Library and much of the rest of what is now the Naval Historical Center.

These two structures were very large and heavily-constructed, if not especially beautiful. Their fronts stretched for nearly a third of a mile down Constitution Avenue's south side, from 17th Street to 21st. A vehicle entryway at the foot of 19th Street separated the buildings. Main Navy had a large pedestrian entrance at the foot of 18th Street, while the Munitions Building's main entrance was at the foot of 20th. Their street facades were three stories high, with long east-west main corridors that branched at regular intervals into north-south wings, eight for the Munitions Building and nine for Main Navy. In the early 1940s, with the needs of World War II looming, the latter had an architecturally similar tenth wing constructed at its eastern end, while roughly-built fourth floors were grafted to the tops of all the wings. Other "wood and beaverboard" temporary buildings were erected behind the two structures and between some of the wings.

Much local controversy accompanied Main Navy's and Munitions' presence on what had been park land, and there was constant agitation for their removal. But they outlasted nearly all of the City's once-vast number of wartime "temporaries". Even when President Nixon ordered their end, most of the occupants greeted the news with a skepticism born of long experience. However, as warm weather arrived in 1970, so did a regular procession of moving vans, followed by wrecking crews. By year's end, the buildings were largely reduced to rubble. Their site is now occupied by Constitution Gardens park, with the Vietnam Memorial resting near the western end of what had once been the Munitions Building.