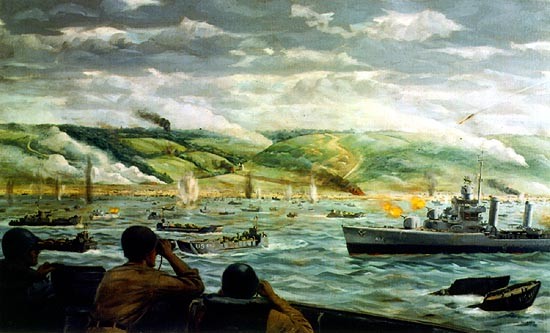 American forces fought all day for this stretch of Omaha beachhead. Its benign green bluffs and valley entrance were a maze of crossfire from enfilading (positioned to fire down the length of the beach) German guns. These included 88’s (a high-velocity 88mm anti-aircraft artillery piece which was used with devastating effect on Allied armored vehicles), mortars (small shell-launchers which fired at a high angle to clear hills and other obstacles), and machineguns. All of these, plus infantry rifle fire, raked the beaches and pinned the infantry to a small area before the expertly designed and deadly minefields.

By mid-afternoon disabled landing craft were clogging the few gaps in the beach obstacles, while under a rain of short and long-range artillery fire, support waves circled and jockeyed for an opening. Destroyers moved toward the beach into dangerous shoal waters to pump salvos of five-inch shells into stubborn German emplacements and mobile targets of opportunity.

The house in the valley and the spire of Colleville-Sur-Mer on the Hill were landmarks of Fox Green Beach. Germans used the spire for an artillery control tower, with spotters able to see the full panorama of the American forces and direct artillery fire at opportune targets. The church’s lovely renaissance architecture crumbled into sad rubble when a U.S. fire-control party on the beach called on the destroyer U.S.S. Emmons to demolish it. The artist was serving as an identification officer aboard that ship. This was the beach which Hemingway described in his article "Voyage to Victory."