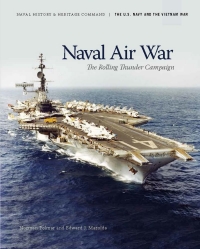 Naval Air War: The Rolling Thunder Campaign is the sixth monograph in the series The U.S. Navy and the Vietnam War. It covers aircraft carrier activity during one of the longest sustained aerial bombing campaigns in history. And it would be a failure. The U.S. Navy proved essential to the conduct of Rolling Thunder and by capitalizing on the inherent flexibility and mobility of naval forces, the Seventh Fleet operated with impunity for three years off the coast of North Vietnam. The success with which the Navy executed the later Operation Linebacker campaign against North Vietnam in 1972 revealed how much the service had learned from and exploited the Rolling Thunder experience of 1965–1968.