The line officer of today’s US Navy looks forward to the time when – with added years and varied experience in the sea service – he or she will be ordered to command a ship. The orders will be issued by the Chief of Naval Personnel in approximately these words:

“Proceed to the port in which USS Advance may be and upon arrival, report to your immediate superior in command, if present, otherwise by message, for duty as commanding officer of USS Advance.”

At this point the new CO [commanding officer] will be participating, for the first time actively, in the “change of command” ceremony. What is the tradition of the change of command?

Very little has been written on the subject. The basic sources, outside of custom and tradition are Navy regulations. The first mention of the ceremony in Navy regulations occurs during the Civil War; there has been little change in the procedures of the change of command since then.

The 1990 edition of United States Navy Regulations in Article 0807, says that a “commanding officer about to be relieved of his command will: (a) inspect the command in company with the relieving officer, (b) In the case of a ship, and within other commands where appropriate, cause the crew to be exercised in the presence of both the commanding officer and the relieving officer at general quarters and general drills, unless conditions render it impracticable or inadvisable."

Relating specifically to the change of command ceremony is the regulation that at the time of turning over command the outgoing CO will “call all hands to muster, read the order of detachment and turn over command to his or her relief, who will read the orders of relief and assume command. At shore activities, this procedure may be modified as appropriate."

The change of command ceremony itself is under way when all hands are called to Quarters at the appointed hour. Sufficient room is left for the guests. The uniform is normally service dress with the official party in full dress uniform with medals and swords.

When the executive officer (XO) reports the crew at Quarters, the outgoing CO and his relief proceed to the ceremonial area together. The ceremony routine will generally include an honor guard to parade the national ensign, the singing or playing of the national anthem, and an invocation and benediction. After a brief speech, the outgoing officer reads the orders of detachment to the officers and crew, then turns to his relief and reports "I am ready to be relieved." The relieving officer steps forward and reads his or her orders to command, after which he salutes the outgoing officer and says, “I relieve you sir/ma'am."

The new skipper typically will give a brief talk to the personnel of his or her new command and may include a statement that standing orders will remain in effect. He then turns to the executive officer and orders the XO to continue with ship's routine.

The ceremony is over and he or she is now CO of USS Advance. 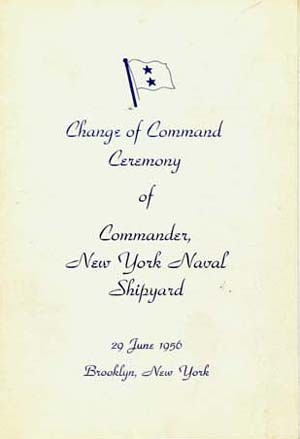 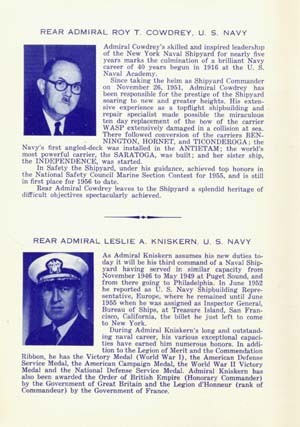 Image of page 2 of Change of Command Ceremony brochure. Includes two officer biographies; text of biographies is below. 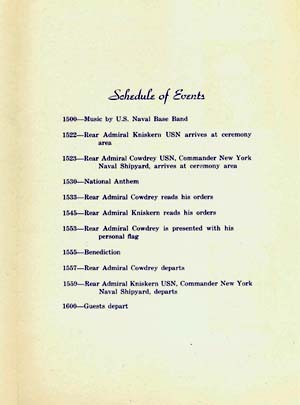 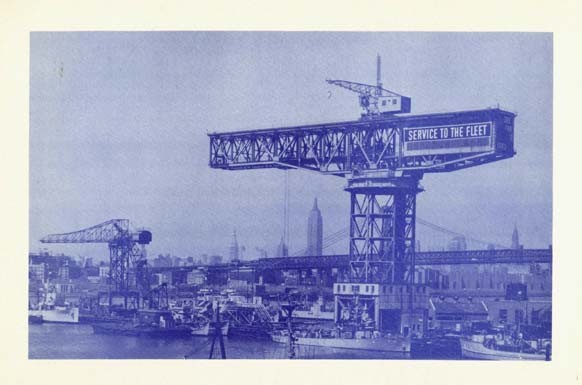 Image of back page of Change of Command ceremony brochure. Photo on back page is of cranes on the New York Naval Shipyard with the Empire State Building in the background.