Commodore Matthew C. Perry and the Opening of Japan

In the mid-nineteenth century, Japan was largely a closed society, resistant to diplomatic and commercial contact with foreigners. Attempts by the United States and other nations to establish formal relations with Japan were repeatedly rebuffed. In response to this situation, in March 1852, President Millard Fillmore ordered Matthew C. Perry to command the U.S. Navy's East India Squadron and to establish diplomatic relations with Japan. Perry initially delivered President Fillmore's request for a treaty to a representative of the Japanese emperor in July 1853. Perry returned with a larger force in 1854, arriving in Edo (Tokyo) Bay, and obtained the signature of Japanese authorities to the Treaty of Kanagawa on 31 March 1854. As a result of this treaty of permanent friendship, a U.S. consul was stationed at Shimoda, U.S. vessels were allowed access to the ports of Shimoda and Hakodate to obtain provisions, and shipwrecked seamen from U.S. vessels were to receive the assistance of Japanese authorities. This treaty led to significant commercial trade between the United States and Japan, contributed to opening Japan to other Western nations, and ultimately resulted in the modernization of the Japanese state. 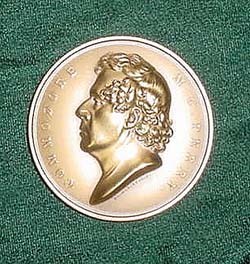 Verso of medal: "Presented to Com. M.C. Perry Special Minister from the U.S.A. by merchants of Boston in token of their appreciation of his services in negotiating the Treaty With Japan signed at Yoku-hama, March 31, and with Lew Chew at Napa July 11, 1854." Naval History and Heritage Command Curator Branch Collection, item #60-274-2

List of Gifts Commodore Matthew C. Perry Took With Him To Japan 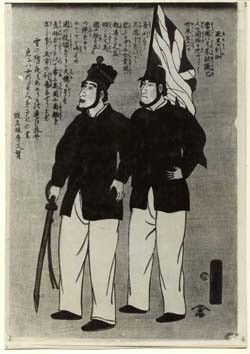 Ships of the Expedition to Japan 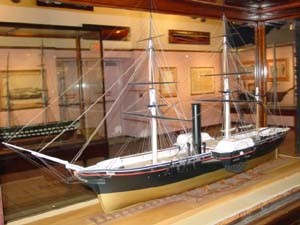 Documents from the Expedition: 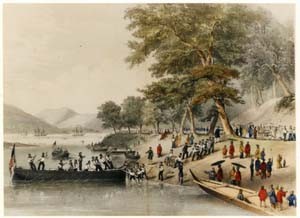 Biography of Commodore Matthew C. Perry
Matthew C. Perry and the Opening of Japan Bibliography
Perry's Expedition to Japan and Related Activities as Described in the Annual Reports of the Secretary of the Navy