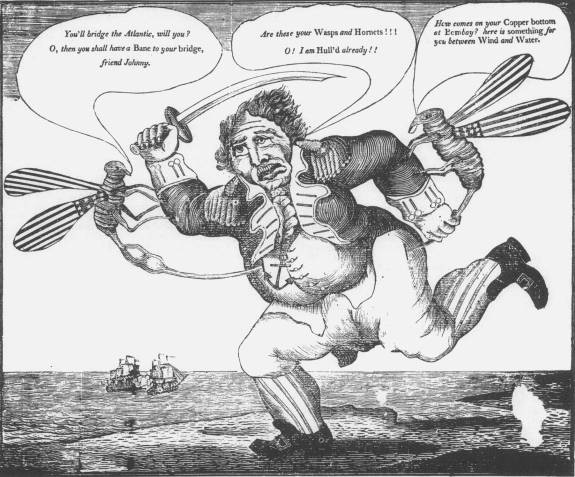 Caption: A cartoon, circa 1813, celebrates the early accomplishments of the sloops-of-war Wasp and Hornet during the War of 1812, with punning allusions to the victories of Isaac Hull and William Bainbridge. (New York Historical Society)

Any of numerous winged hymenopterus insects possessing smooth, slender bodies, and an abdomen attached by a narrow stalk. They have well developed wings, biting mouthparts, and often administer painful stings.

The second Wasp, a sloop of war constructed in 1806 at the Washington Navy Yard, was commissioned sometime in 1807, Master Commandant John Smith in command. Wasp's movements in 1807 and 1808 remain unrecorded; but, by 1809, she was cruising the eastern seaboard of the United States. By the close of 1810, she was operating from the ports of Charleston, S.C., and Savannah, Georgia, presumably concentrating on the waters along the southern portion of the country's eastern coast. In 1811, she moved to Hampton Roads, Va., where she and brig Nautilus joined frigates United States and Congress in forming a squadron commanded by Commodore Stephen Decatur.

She continued to operate along the coast of the middle states after the United States went to war with Great Britain in June of 1812. Her single action of that war came in October 1812. On the 13th, she exited the mouth of the Delaware River and, two days later, encountered a heavy gale which carried away her jib boom and washed two crewmen overboard. The following evening, Wasp came upon a squadron of ships and, in spite of the fact that two of their number appeared to be large men-of-war, made for them straightaway. She finally caught the enemy convoy the following morning and discovered six merchantmen under the protection of a 22-gun sloop-of-war, HBM brig Frolic. At half past eleven in the morning, Wasp and Frolic closed to do battle, commencing fire at a distance of 50 to 60 yards. In a short, but sharp, fight, both ships sustained heavy damage to masts and rigging, but Wasp prevailed over her adversary by boarding her. Unfortunately for the gallant little ship, a British 74-gun ship-of-the-line, Poictiers, appeared on the scene, and Frolic's captor became the final prize of the action. Wasp's commanding officer, Master Commandant Jacob Jones, had to surrender his small ship to the new adversary because he could neither run nor hope to fight such an overwhelming opponent. Wasp served briefly in the Royal Navy as Peacock but was lost off the Virginia capes in 1813.