An annual, seasonal prevailing wind in the region of South and Southeast Asia that blows from the southwest between May and September and brings rain, or from the northeast between October and April.

The second U.S. Navy ship named Typhoon. The Navy acquired tanker Typhoon on 19 October 1943. Although Navy records indicate that the ship was renamed Villalobos and designated IX-145 on 3 November 1943, she served as Typhoon until sometime late in 1944, when she began using her new name, Villalobos.

After completing a Coast Guard homeland security inspection of a liquid gas tanker, the sailors involved brought their rigid hull inflatable boat (RHIB) about, and returned to Typhoon. While they lay alongside the patrol vessel off Cape Henry, Va., at 0355 on 7 November 2003, swells knocked Typhoon’s 42-year-old Engineman 2nd Class Douglas Bolles into the water. When the coxswain attempted to grab Bolles the RHIB capsized, throwing him into the water. Typhoon’s crew rescued the coxswain, but despite an extensive search by guided missile destroyers Barry (DDG-52), Donald Cook (DDG-75), and Porter (DDG-78), patrol craft Shamal (PC-13), Sirocco (PC-6), Tempest (PC-2), and Thunderbolt (PC-12), Coast Guard cutter Albacore (WPB-87309), and aircraft, they failed to find the missing sailor. Some fishermen recovered his body about 18 miles east of Back Bay in the Virginia capes during the afternoon watch on 22 November.

A multinational force including guided missile cruiser Normandy (CG-60), with her embarked Sikorsky SH-60B Seahawk of HSL-42 Detachment 1, coastal patrol ships Firebolt (PC-10) and Typhoon, and German frigate Karlsruhe (F.212), rescued 89 people from a dhow that had capsized in the Gulf of Aden off the Somali coast, on 29 April 2005.

A merchant vessel sailing in the Arabian Gulf sighted a raft adrift and notified coalition forces, on 7 September 2007. The Fifth Fleet dispatched Typhoon, which patrolled the region, to render assistance to the distressed mariners. Typhoon reached the area and discovered seven mariners, and sent her visit, board, search, and seizure (VBSS) team and a hospital corpsman to investigate. The VBSS team reported that all seven castaways were in stable condition, provided them water, and notified the Marine Emergency Mutual Aide Center in Bahrain of their plight, which directed local coast guardsmen to rescue the mariners. 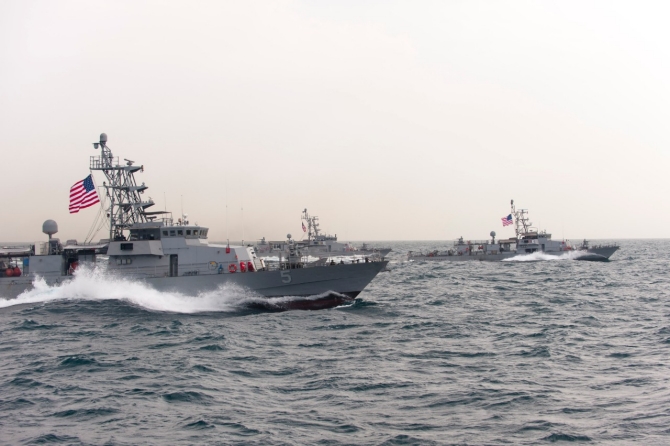