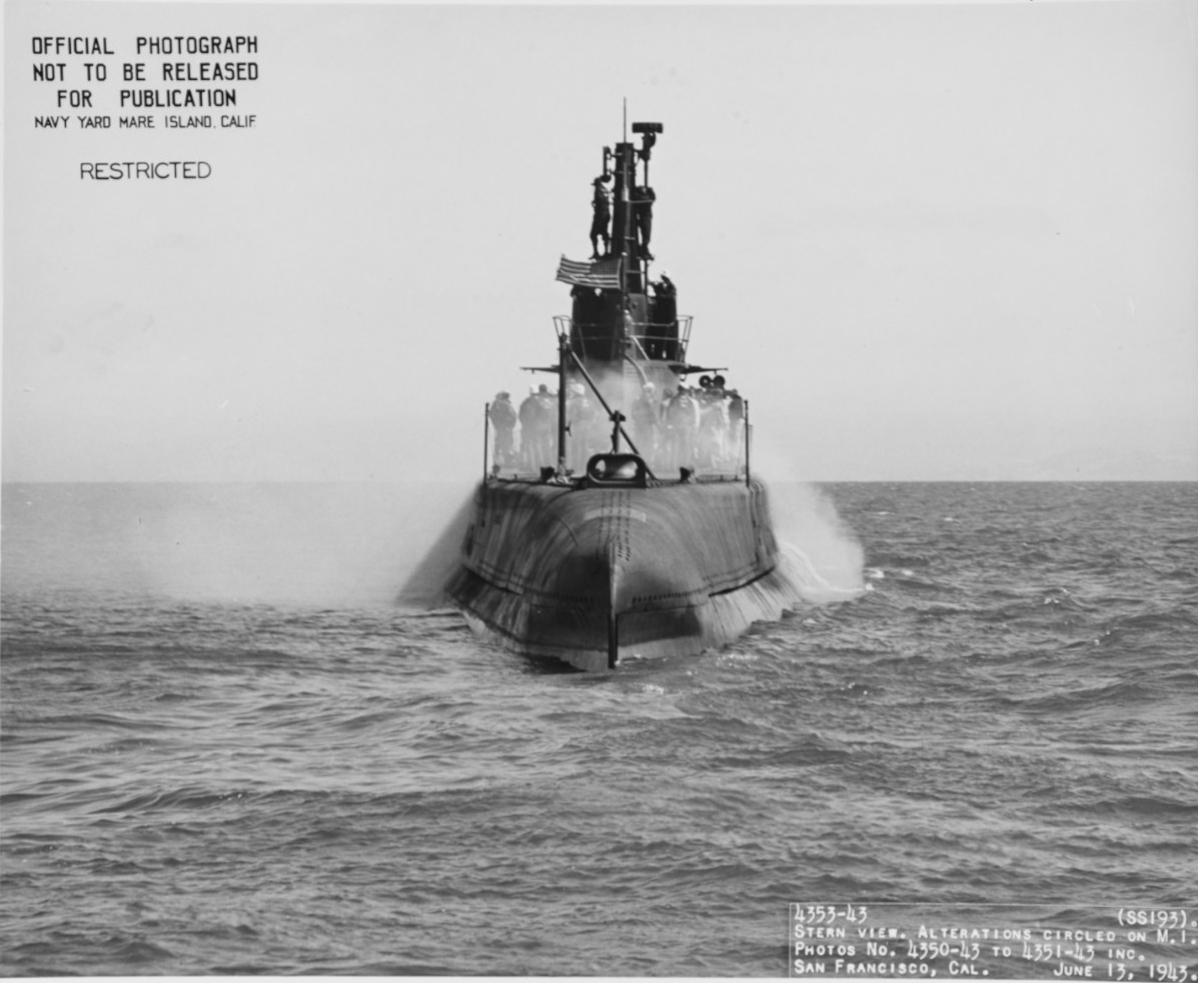 A large fish with a long, swordlike beak and a high dorsal fin.

Following shakedown in the Pacific and post-shakedown repairs at Mare Island, Swordfish operated out of San Diego, Calif., until early 1941, when she set sail for Pearl Harbor. On 3 November, Swordfish, in company with three other United States submarines, departed Pearl Harbor, and on 22 November, arrived at Manila, Philippine Islands. The submarine remained at Manila until the Japanese attack on Pearl Harbor on 7 December. The following day, she set sail on her first war patrol, conducted off the coast of Hainan, China. After damaging several enemy vessels on the 9th, 11th, and 14th, Swordfish sank her initial victim of the war on 16 December. Hit amidships by one of three torpedoes, the cargo ship Atsutasan Maru erupted in a cloud of smoke and flames and disappeared beneath the waves. On 27 December, Swordfish embarked the organizational staff of the Submarines Asiatic Command Staff at Manila and headed for Soerabaja, Java, arriving on 7 January 1942.

Swordfish departed Soerabaja on 16 January for her second war patrol, conducted in the Celebes Sea and in the Philippines. On 24 January, she torpedoed and sank the cargo ship Myoken Maru off Kema, Celebes Islands. On 20 February, she submerged in the entrance to Mariveles, Luzon, only to surface after dark to take on board the President of the Philippines and his family. She departed through a minefield and arrived at San Jose, Panay, Philippine Islands on the 22d, where the President and his party were transferred to a motor tender. Swordfish then returned to Manila Bay and embarked the High Commissioner of the Philippines, arriving at Fremantle, Western Australia, on 9 March.

Swordfish got underway from Fremantle on 1 April for her third war patrol, with her primary mission being to deliver 40 tons of provisions to the besieged island of Corregidor. However, Corregidor fell to the Japanese before the mission could be carried out; and the submarine was ordered to patrol in the vicinity of Ambon Island. The only ships sighted were beyond effective range, and the submarine returned to Fremantle on 1 May.

Departing Fremantle for her fourth war patrol on 15 May, Swordfish was in the South China Sea on 29 May where she sank a 1,900-ton cargo ship and was in the Gulf of Siam on 12 June where she torpedoed and sank the cargo ship Burma Maru. The submarine returned to Fremantle on 4 July.

On 22 August, she sighted her first target of the patrol, and quickly sent the cargo ship Nishiyama Maru to the bottom, the victim of two torpedo hits. A convoy was intercepted on 5 September, and Swordfish damaged a large tanker before sinking the cargo ship Tenkai Maru. The submarine concluded this patrol at Brisbane, Australia, on 20 September.

Swordfish's ninth war patrol lasted only three weeks. Shortly after reaching her assigned patrol area, material defects were discovered, and the submarine had to return to port.

On the day after Christmas 1943, Swordfish departed for her tenth war patrol, conducted in Tokyo Bay. On 14 January 1944, she sank the passenger-cargo ship Yamakuni Maru and two days later sank the converted gunboat Delhi Maru. On 27 January, she fired two torpedoes at the converted salvage vessel Kasagi Maru, which broke in half and sank. Swordfish terminated her tenth patrol at Pearl Harbor on 7 February.

Swordfish put to sea on 13 March for her eleventh war patrol, conducted in the Marianas Islands. Although several enemy ships were damaged during this patrol, no sinking could be confirmed; and the submarine returned to Majure on 29 April.

Swordfish's twelfth war patrol was conducted in the area of the Bonin Islands. On 9 June, the submarine found the Japanese destroyer Matsukaze clearly silhouetted against the horizon and sank the enemy ship with two torpedoes from her bow tubes. On 15 June, she torpedoed and sank the cargo ship Kanseishi Maru. The remainder of the patrol was unproductive, and the submarine terminated her twelfth patrol at Pearl Harbor on 30 June.

On 22 December, Swordfish departed Pearl Harbor to conduct her thirteenth war patrol, in the vicinity of Nansei Shoto. On 2 January 1945, she was ordered to patrol clear of the Nansei Shoto area until completion of scheduled air strikes. She acknowledged receipt of these orders on 3 January. No further communication was received from the submarine. On 15 February, after repeated attempts to contact her by radio had failed, she was reported as presumed lost, the victim of unknown causes. 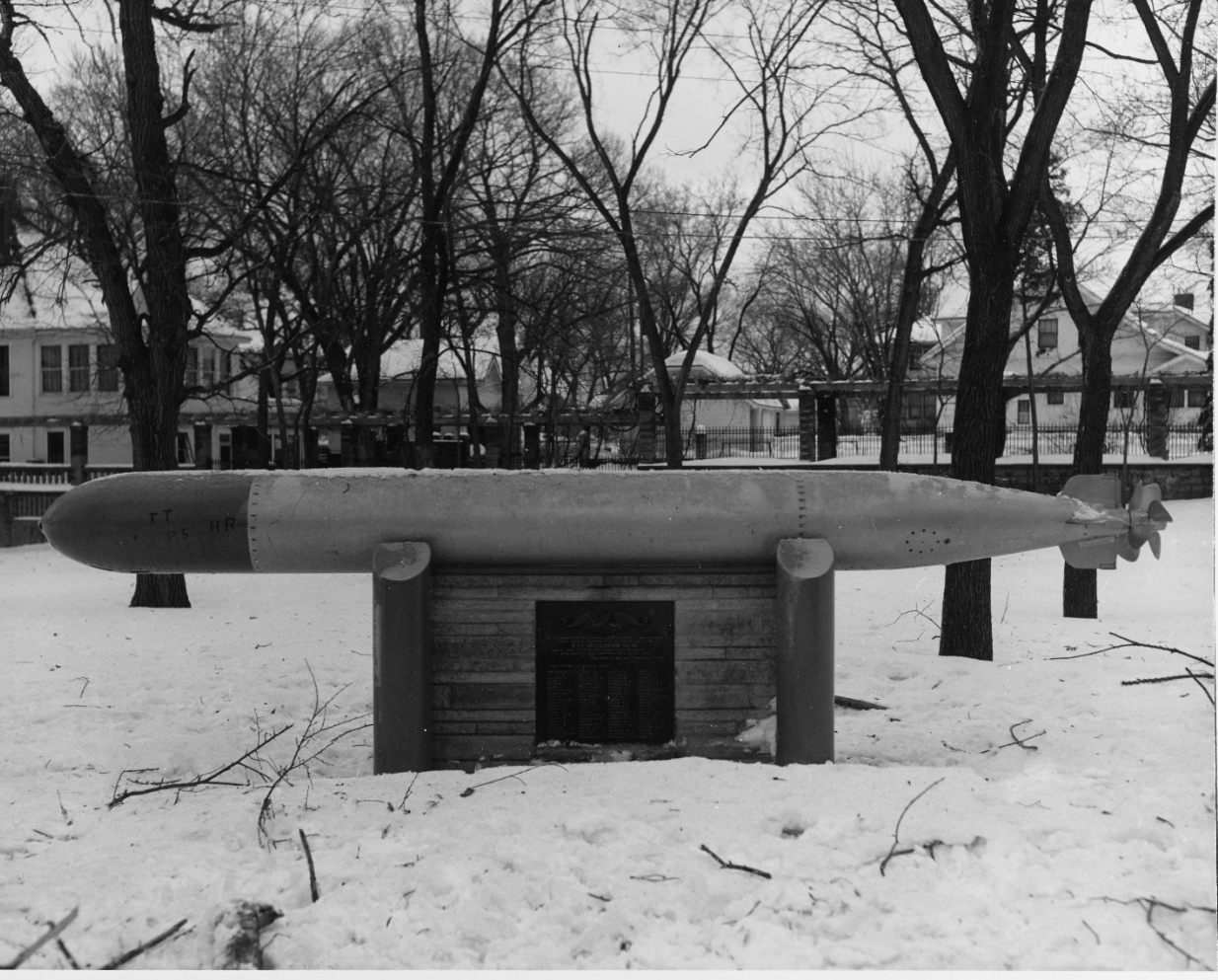 Memorial to Swordfish (SS-193) at St. Paul, Minnesota, January 1967. It features a torpedo and has plaques on either side, one in memory of Swordfish crewmen lost with their submarine off Okinawa in January 1945. The other plaque memorializes the fifty-one other U.S. Navy submarines lost during World War II. The memorial was financed and built by the City Council, Minnesota Building Tradesmen and the Minnesota Viking Squadron of the U.S. Submarine Veterans of World War II. U.S. Naval History and Heritage Command photograph. Catalog #: NH 42077.