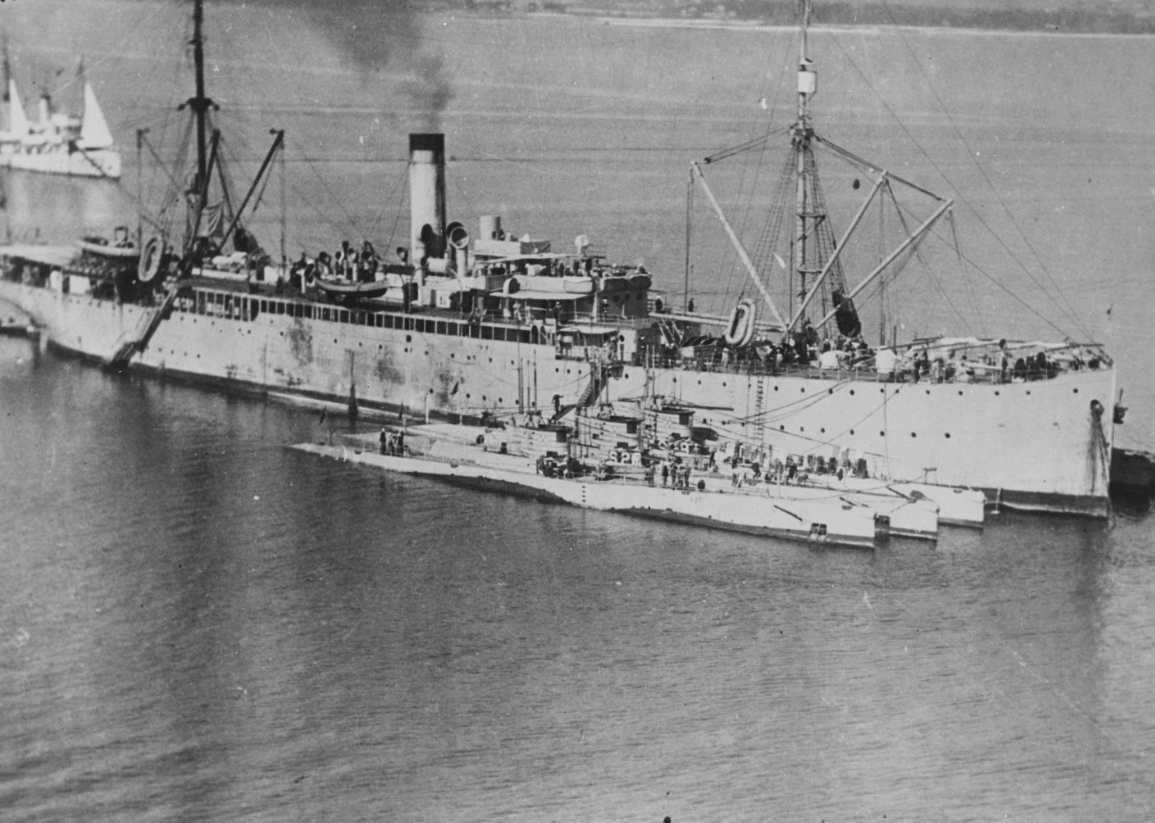 Savannah (AS-8) at anchor with S-type submarines alongside, 23 December 1924. Official U.S. Navy photograph from the collections of the Naval History and Heritage Command, NH 98631.

The third Savannah was launched on 18 April 1899 as Saxonia for the Hamburg American Steamship Co., by the Flensburger Schiffbau Gesellschaft, Flensburg, Germany. Seized, upon United States entry into World War I, at Seattle, Wash., where she had been interned since 1914, Saxonia was renamed Savannah on 9 June 1917; ordered converted to a submarine tender for the United States Navy on 20 October 1917; and commissioned on 3 November 1917 at the Puget Sound Navy Yard, Lt. Comdr. Arthur Jensen in command.

Completing temporary outfitting as a tender, Savannah was assigned to Submarine Division 8 which had been ordered to the east coast of the United States. Departing Puget Sound on 21 November, Savannah and submarines, N-1, N-2, and N-3 called at several ports including San Pedro, Calif.; Magdalena Bay and Acapulco, Mexico; before arriving at Balboa, C.Z., on 31 December 1917. Transiting the Panama Canal, Savannah proceeded to Kingston; Key West; Norfolk; and New London; eventually reaching the Boston Navy Yard for an extensive overhaul and conversion on 13 February 1918.

Standing out of Boston harbor on 1 August 1918, Savannah made for Newport, R.I., to rejoin the 8th Division, Submarine Force, then consisting of O-3, O-4, O-5, O-6, O-7, O-8, O-9, and O-10. After cruising along the New York and New Jersey coasts, Savannah made a cruise to Ponta Delgada, Azores, in support of a submarine division bound for European waters. Arriving in the Azores on 16 November 1918, after the Armistice, Savannah was recalled. She returned to Charleston, S.C., on 13 December for repairs.

Remaining with Submarine Division 8, Savannah operated along the east coast of the United States and in the Caribbean through July 1924. Her operations included support of frequent torpedo practice exercises, fleet maneuvers, and normal upkeep and maintenance of her flotilla. On 17 July 1920, Savannah was designated AS-8. In February 1923, she transited the Panama Canal during a fleet exercise, towing R-9, R-21, R-27, and S-20 at various times. Returning to the Caribbean, Savannah was employed in towing O-1 from Guantanamo Bay to the Norfolk Navy Yard, arriving on 21 April 1923. Other duties included assistance to S-23, stranded at the entrance to Chiriqui Lagoon, Panama, in April 1924.

Reassigned to Submarine Division 11 in July, Savannah continued to operate in the Atlantic and the Gulf of Mexico into 1925. Then ordered to the Pacific Fleet, Savannah departed the Canal Zone on 23 February 1925 for San Diego, arriving on 12 March. After two cruises to San Francisco, Savannah deployed to Kaunakakai, Molokai, T.H., for Fleet Problem III. Remaining in Hawaiian waters, she entered Pearl Harbor on 28 April for an abbreviated overhaul, after which she joined the Battle Force for exercises in Lahaina Roads.

Subsequently ordered to return to the west coast of the United States, Savannah arrived at Portland, Oreg., on 12 June 1925; and participated in the Rose Festival through 21 June. Overhaul at the Mare Island Navy Yard followed; and, in mid-September, Savannah took part in the Diamond Jubilee celebrations at San Francisco. Assigned to duty as flagship, Commander, Submarine Divisions, Battle Force, Savannah operated along the Pacific coast from Washington to Panama into September 1926. Savannah's last duty was carrying passengers from San Pedro to Bremerton, where she arrived on 15 October. She was decommissioned on 16 December 1926 and was placed in reserve at the Puget Sound Navy Yard.

The large number of new vessels planned for the United States Fleet in the 1930's led to the selection of the name Savannah for a light cruiser, CL-42. Accordingly, the third Savannah (AS-8)'s name was dropped on 15 September 1933, the ship becoming AS-8. Subsequently declared surplus to naval requirements, AS-8 was struck from the Navy list on 26 June 1934 and sold on 26 September 1934 to Mider & Marcus of Seattle, Wash., for mercantile service. Renamed Orbis in 1942, the ship was finally broken up in Japan during 1954.