The first U.S. ship to be named for the renowned historian and naval officer Samuel Eliot Morison (b. 1887– d. 1976). The son of John H., and Emily M. (Eliot) Morison, Samuel was named after his maternal grandfather, Samuel Eliot, who was also a historian and is believed to have been the one primarily responsible for fostering Samuel’s personal interest in both history and maritime exploration.

Morison received a doctorate in history from Harvard in 1912 and became an accomplished scholar of American history. When the United States entered WWII in late 1941, Morison petitioned his personal friend, President Franklin D. Roosevelt, to allow him to document the Navy’s operations in the war. Morison received permission from the President, as well as Secretary of the Navy Frank Knox to undertake the venture. 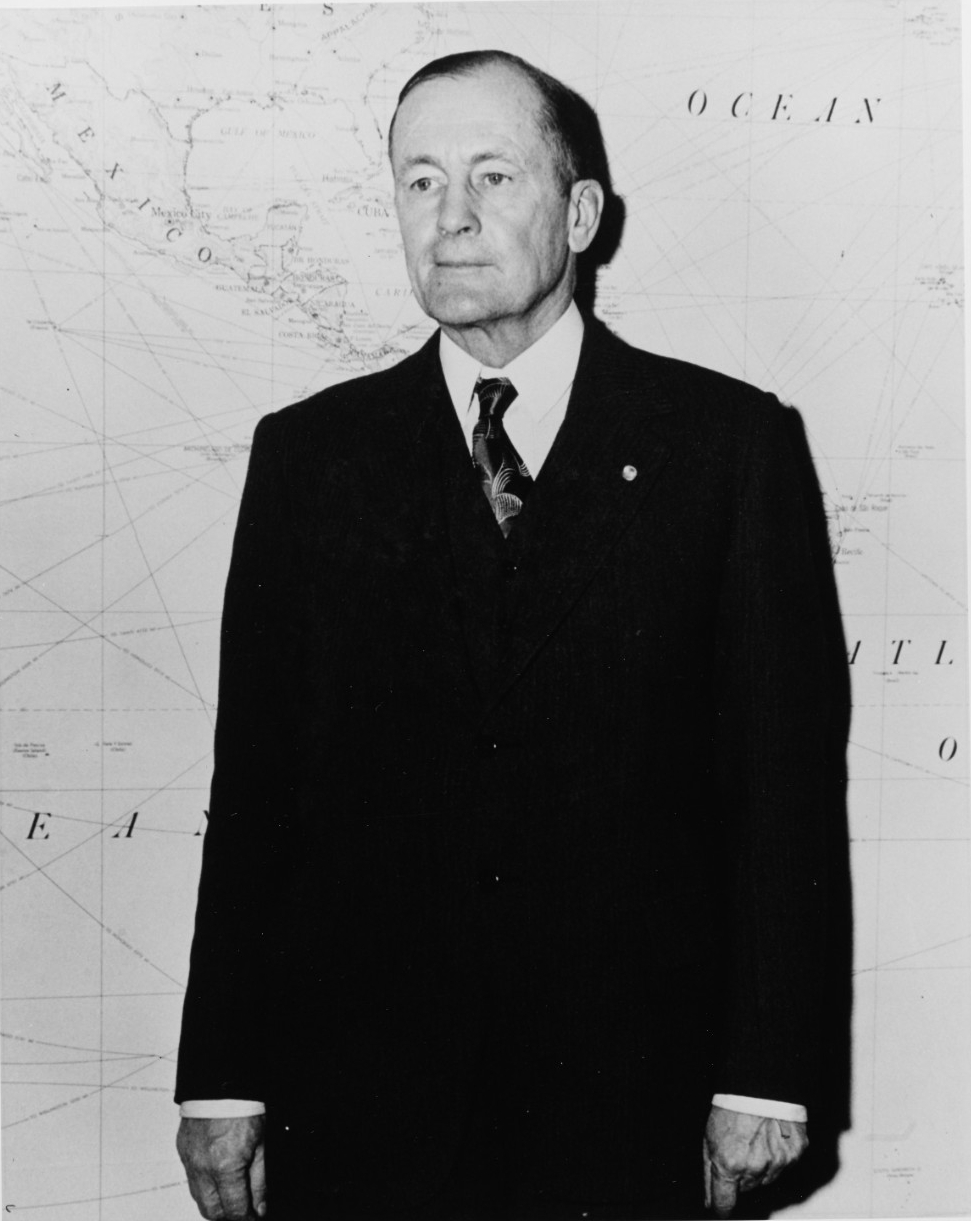 Morison subsequently took a leave of absence from Harvard and received a commission as a lieutenant commander in the U.S. Navy Reserve. In undertaking the momentous task of chronicling the U.S. Navy’s operations in the war, Morison organized a team of officers, which he deployed throughout the various theaters of the war, to assist him in safeguarding official reports and documenting operations as they occurred.

With the close of the war in 1945, Morison left the naval service as a captain with seven battle stars to his credit for serving on board vessels that participated in wartime operations. When the war concluded, Morison set about writing his immense and comprehensive multi-volume History of United States Naval Operations in World War II. His work has had a lasting impact on the history of the U.S. Navy’s role in the Second World War. A number of years later, with his transfer to the Honorary Retired List of the Naval Reserve, on 1 August 1951, he was promoted on the basis of the aforementioned combat awards to the rank of rear admiral.

Morison eventually returned to his professorship at Harvard and in the course of his lifetime published more than 30 scholarly monographs. Rear Adm. Morison died on 15 May 1976, and was interred at Forest Lawn Cemetery in Northeast Harbor, Maine.

Samuel Eliot Morison was laid down on 4 December 1978, at Bath, Maine, by Bath Iron Works Corp.; launched on 14 July 1979 and sponsored by Elizabeth Morison Spingarn, the eldest daughter of the late Rear Adm. Morison; and placed “In Commission” on 22 September 1980 at Bath, Cmdr. Larry J. Andrew, in command. Samuel Eliot Morison then had her formal commissioning ceremony on 11 October 1980, at Constitution Park, Boston, Mass. 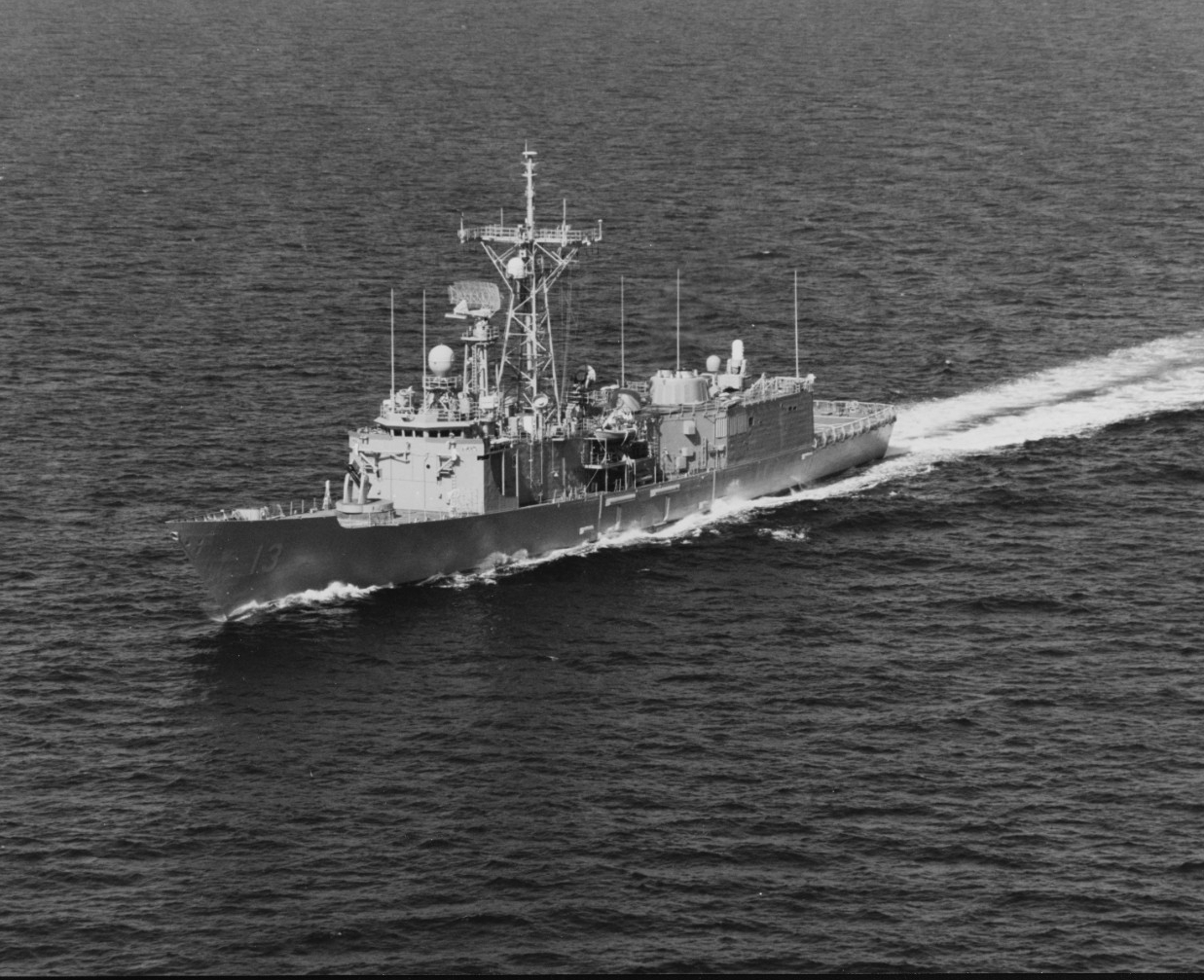 The seventh ship of the Oliver Hazard Perry class guided missile frigates, Samuel Eliot Morison was built to provide naval escort and protection capabilities to aircraft carriers, amphibious forces and military and merchant convoys. Her weapons systems made her ideal for detecting and attacking submarines, neutralizing anti-ship missiles and destroying hostile surface ships. Additionally, her design included an innovative electronic combat system that reduced the number of people required to operate her.

Following her commissioning, Samuel Eliot Morison steamed to Northeast Harbor, Mount Desert Island, Maine, where over 250 family and friends of the Morison Family were embarked for a tour of the ship. Shortly afterward the guided missile frigate reported to her first homeport at Naval Station (NS) Mayport, Fla., arriving there on 20 October 1980.

Throughout the early 1980s, Samuel Eliot Morison aided in the U.S. Navy’s mission to meet national and North Atlantic Treaty Organization (NATO) commitments in the Atlantic Ocean and Mediterranean Sea. From 21 January to 10 February 1982, she participated in Composite Training Unit Exercise (COMPUTEX) 2-82.

The following month the guided missile frigate set out on her first deployment, getting underway on 17 March 1982 and steaming for the Mediterranean Sea with the Mediterranean 4-82 Battle Group. While operating in those waters she participated in the Royal Navy (RN) exercise SPRINGTRAIN 1-82 and continued maneuvering with the British task force until the RN fleet departed the area in response to the Argentinean invasion of the Falkland Islands.

During her time deployed to the Mediterranean, in the spring of 1982, Samuel Eliot Morison also joined company with Clark (FFG-11), while transiting to a port in Italy. Their subsequent meeting represented one of the first times that two Oliver Hazard Perry class ships operated simultaneously in the region. While accompanying the destroyer tender Puget Sound (AD-38), Samuel Eliot Morison participated in the multi-faceted battlegroup exercise Distant Drum steaming in the vicinity of in the western and central Mediterranean. She also took part in a month long NATO On Call Force Mediterranean exercise.

On 27 June 1982, Samuel Eliot Morison steamed to the eastern Mediterranean to commence operations with Task Force 61 and 63—screening ships off the coast of Lebanon. While performing these duties she assisted the Cyprus Coast Guard in rescuing the crew of the yacht Anthony. Samuel Eliot Morison quit the Mediterranean on 22 July and eventually arrived back at her homeport on 6 August.

In early February 1984, Samuel Eliot Morison participated in Readiexercise 2-84 and then a few months later on 2 April, she departed Mayport for her second deployment to the Mediterranean Sea, steaming in company with the aircraft carrier Saratoga (CV-60) Battle Group. Samuel Eliot Morison later passed through the Suez Canal on 19 April and as of 1 May began patrol duties in the Persian Gulf as a member of the U.S. Middle East Force. During her time there, the ship’s command history reports that “continued hostilities between Iran and Iraq resulted in several extremely tense situations.”

On 29 May 1984, Samuel Eliot Morison assisted in the emergency medical evacuation of a critically injured seaman from the Swedish merchant vessel Sea Saga. Several months later, the warship participated in the NATO exercise Display Determination ’84. She later arrived back at her homeport on 20 October.

In late March 1985, Samuel Eliot Morison got underway for the Caribbean Sea and participated in a number of naval exercises off the coast of Cuba. During her time in the area, on 13 April, she was called on to serve as an escort for Coral Sea (CV-43), which had been involved in an at sea collision two nights prior with Ecuadorian tanker Napo. Samuel Eliot Morison accompanied Coral Sea most of the way back to Norfolk, Va.

Samuel Eliot Morison entered Charleston, S.C., on 1 July 1986, marking the beginning of both her transition into the Naval Reserve Force, as well as the commencement of her new homeport assignment in that locality. A crew of selected Naval Reserve members were later assigned and then integrated with the ship’s active duty sailors.

With the escalation of the war on drugs in the mid to late 1980s, Samuel Eliot Morison operated numerous times  in joint interagency task force operations with the U.S. Coast Guard in order to support counter narcotics operations in the Caribbean Sea and Pacific Ocean. While patrolling in this capacity Samuel Eliot Morison closely monitored maritime traffic along the northern coast of South America, as well as numerous other small islands in the Caribbean Sea, consequently intercepting and boarding numerous suspected drug trafficking vessels. In total, she contributed to the seizure of 5,400 pounds of cocaine.

On 31 May 1988, Samuel Eliot Morison voyaged to Northern Europe for a midshipman training cruise in the Netherlands. The warship returned to her homeport at Charleston on 24 July. On 24 August, her homeport changed back to Mayport. Just four days later on 28 August 1988, Samuel Eliot Morison  stood out with the Forrestal (CV-59) Battle Group participating in exercise Ocean Safari 1987, which brought her to the North Sea and Arctic Circle. She later returned to Mayport on 24 November. The following year she continued participating in numerous law enforcement operations in the Caribbean but did not conduct any major deployments.

Samuel Eliot Morison turned her prow seaward on 19 June 1991, for a cruise of the Caribbean Sea and eastern Pacific Ocean. On 20 May, while en route to the Pacific and just off the coast of Panama, she stopped the fishing vessel Endeavor I. An examination of the vessel and the surrounding water revealed several unidentified bales, which were later found to contain 408 pounds of cocaine.

From 16 June to 25 August 1992, Samuel Eliot Morison conducted her first Great Lakes Cruise. The following year she spent four months in the Caribbean as part of an international armada deployed to enforce a United Nations embargo of Haiti. Between 18 and 23 January 1993, the warship participated in Operation Able Manner, where she patrolled the waters between Haiti and Cuba in order to participate in the interdiction of Haitian refugee boats. Samuel Eliot Morison then steamed south as a part of Combined Joint Task Group 4.1 (24 January–11 February 1993) to support counter narcotics operations. With her eventual return to port on 5 May, she commenced a lengthy Selected Reserve Availability Period. Her crew’s dedication and successful completion of numerous operations during the year earned the warship her first Battle Efficiency Award.

According to Samuel Eliot Morison’s command history,  the warship had “the unique opportunity to show its stuff during the COMDESRON Six MISSILEX ’94,” wherein she operated with six of the eight Naval Reserve Force frigates assigned to Destroyer Squadron (DesRon) 6 (17–24 February 1994). The exercise included “formation maneuvering, numerous seamanship evolutions, communication drills and the infinitely popular Quick Draws.” In late spring (25 May–15 June), the warship participated in the “action packed two week,” COMPUTEX JTG 1-95, operating with the Dwight D. Eisenhower (CVN-69) Battle Group. Upon completion of the exercise Samuel Eliot Morison became one of only three Reserve ships to have participated in a complete COMPUTEX.

Samuel Eliot Morison deployed to Haiti (29 September–2 October 1994) in support of Operation Maintain Democracy. In the course of those operations, she patrolled the Florida straits in response to the mass migration of Cuban immigrants. The warship received approximately 700 Cuban refugees and transported them to Guantanamo Bay, Cuba.

On 19 June 1995, Samuel Eliot Morison set out on a Great Lakes cruise in which she visited 22 American and Canadian cities and hosted over 97,000 visitors, which her command history observed, “set new visitation records for an American naval vessel.” She returned to her homeport on 9 September.

In 1996, Samuel Eliot Morison completed a Tailored Ship’s Training Availability, Cruise Missile Qualification and deployed twice. From 14 March to 2 May 1996, the warship deployed to the western Caribbean Sea and eastern Pacific Ocean in support of counter narcotics operations. On 24 May, Samuel Eliot Morison steamed for the Northern Atlantic Ocean and Baltic Sea in order to participate in Baltic Operations‘96. In the course of the deployment, she operated with naval forces from 14 different nations including Russia, the Netherlands, Sweden, Finland and Latvia. She returned to her homeport on 22 August and in October began a Selected Restricted Availability Period that lasted through December.

The following year Samuel Eliot Morison underwent an inspection by the Board of Inspection and Survey, a Torpedo Readiness Exercise, a Command Assessment of Readiness and Training, a Cruise Missile Tactical Qualification and participated in Joint Task Force Exercise ’97.

On 27 may 1998, Samuel Eliot Morison got underway for Great Lakes Cruise ’98. She eventually returned to her homeport on 16 September.

The following year in 1999, the warship went on another two-month counter narcotics deployment and completed an Inter-Deployment Training Cycle. Operations in 2000 mirrored those of 1999 with an added counter narcotics cruise to the Pacific (3 April–23 June) followed by a Restricted Availability Period.

As of November 2001, Samuel Eliot Morison was deployed as part of Standing Naval Force Atlantic off the coast of Spain and undergoing a maintenance period in Rota, Spain. Upon the completion of her maintenance in December, Samuel Eliot Morison returned to her homeport. During the homecoming voyage, her commanding officer received notification that the warship had been designated for sale to the government of Turkey. Thus, she returned home from her final deployment on 21 December 2001.

After 21 years of service, Samuel Eliot Morison was decommissioned on Wednesday, 10 April 2002 at Pier 14, NS Norfolk, Va. She was stricken from the U.S. Naval Vessel Register on 23 July 2002.

On the same day of de-commissioning the ex-Samuel Eliot Morison was transferred to the Turkish Navy and renamed Gokova (F-496).