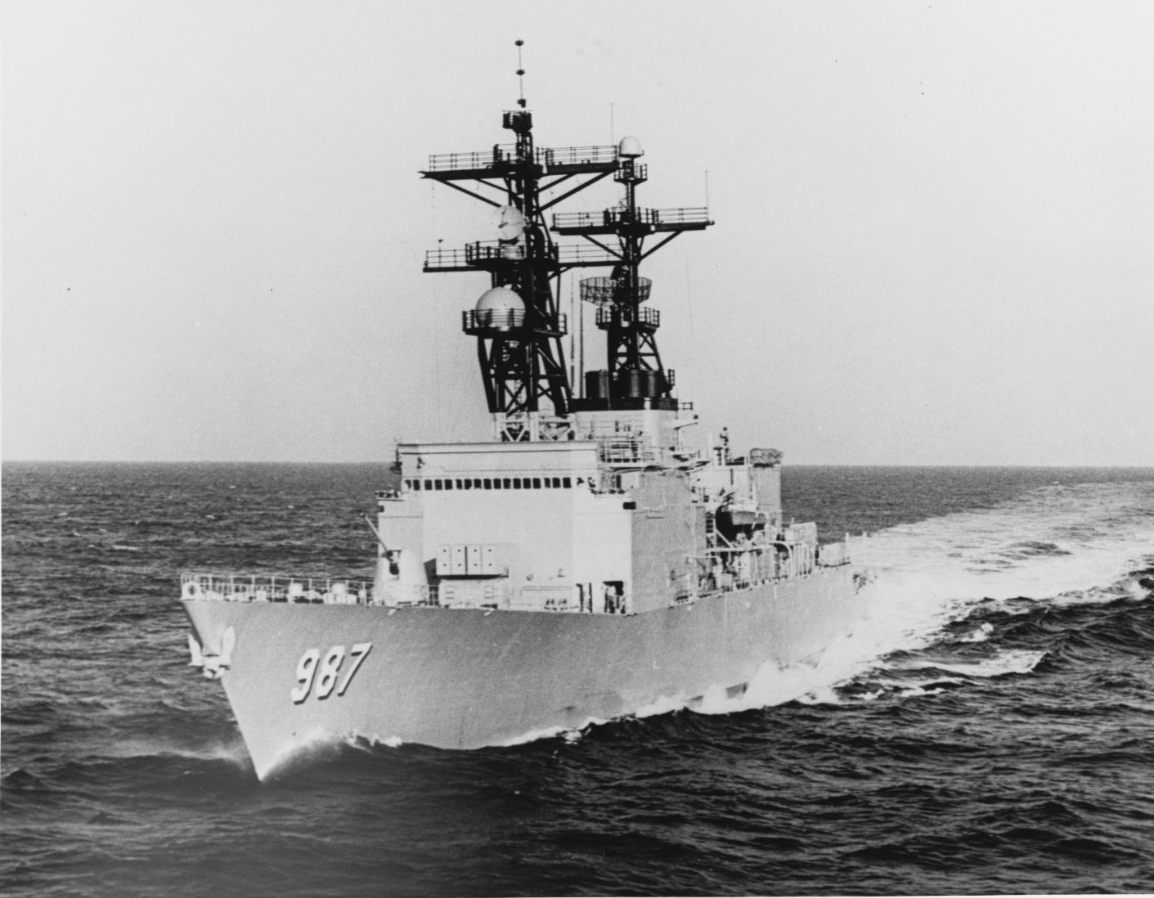 O'Bannon (DD-987) underway circa the early 1980s. Photo was received by the DoD Still Media Depository in April 1982. Official U.S. Navy photograph from the collections of the Naval History and Heritage Command. Catalog#: NH 106905. 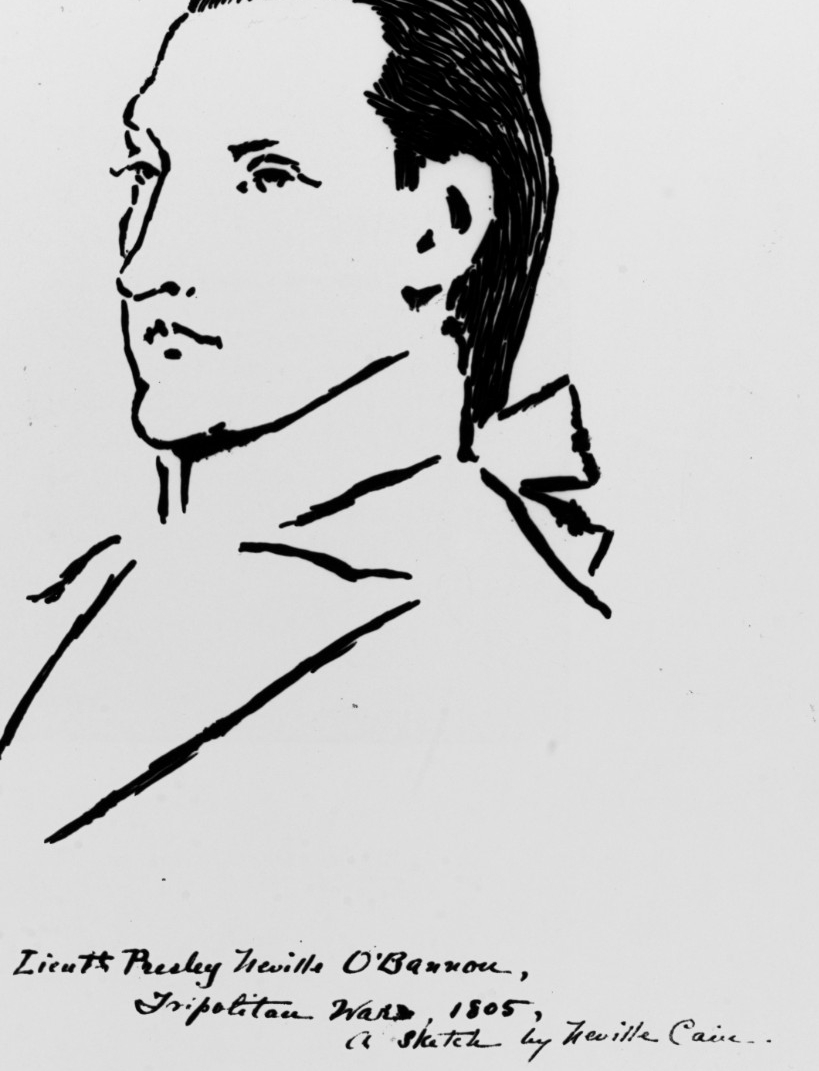 Lieutenant Presley Neville O' Bannon, USMC. A sketch by Neville Cain as he appeared in 1805. Cain, most probably a relative, depicts him at about the time he led a force of Marines 600 miles to assist in the capture of Derne, during the war with Tripoli. Copyright Owner: Naval History and Heritage Command. Catalog#: NH 47535.

The third O’Bannon was laid down on 24 June 1977, at Pascagoula, Miss., by Ingalls Shipbuilding; launched on 25 September 1978 and sponsored by Mrs. Patricia H. Barrow, wife of General Robert H. Barrow, Commandant Marine Corps; and commissioned on 15 December 1979, Cmdr. Marshall R. Willenbucher in command.

O’Bannon got underway from Pascagoula for her homeport at Charleston, S.C., arriving on 21 December 1979. Assigned to Destroyer Squadron (DesRon) 4, O’Bannon steamed to Ft. Lauderdale, Fl., from 29 January-3 February 1980, returning to Charleston on 7 April.

On 21 April 1980, O’Bannon got underway for a retrofit availability in Pascagoula, from 21 April-18 July. During her retrofit, she received a reassignment to DesRon 6 on 1 July. The destroyer received the latest weapons and technology, including an eight canister Harpoon missile system and an AN-SLQ-32(V)2 Electronic Warfare (EW) system. O’Bannon got underway for her first full refresher training in Guantánamo Bay, Cuba, on 2 September 1980. After holding refresher training (1 October-4 November), she participated in naval gunfire support qualifications on 7 November.

On 18 March 1981, O’Bannon departed her homeport of Charleston for her first Mediterranean/North Atlantic deployment. O’Bannon conducted an Intermediate Maintenance Activity Availability (IMAV) period from 16-24 July alongside Puget Sound (AD-38), flagship of Commander Sixth Fleet. From 18-19 August, she participated in a freedom of navigation (FON) exercise off the coast of Libya. Getting underway for Charleston, O’Bannon crossed the Arctic Circle on 1 September, holding the traditional Order of the Blue Nose ceremony.

O’Bannon participated on 9 April 1982 in readiness exercise (READIEX) 2-82 and Exercise Ocean Venture before making a port call at San Juan, P.R. (15-18 April). After further training in the Caribbean, the destroyer headed south, crossing the equator on 10 August and holding the traditional “cross-the-line” ceremonies. Making way for South America, she made several port calls in Latin American countries throughout October-November before steaming to Africa for a West-African Training Cruise (WATC). O’Bannon steamed back for her homeport of Charleston by the end of the year.

O’Bannon returned to being a ship-of-the-line with the formation of the rehabilitation team to refurbish all of her berthing areas. On 6 October 1986, she got underway for a six-month deployment to the Persian Gulf, returning to Charleston on 6 April 1987.

After participating in New York City’s Fleet Week, from 19-25 April 1988, O’Bannon remained in Charleston most of the rest of the year, with short deployments to the Caribbean. She got underway for a Mediterranean/Middle East deployment from 5 December 1988-21 July 1989.

Underway from her homeport at Charleston, O’Bannon participated in Square Shooter Exercise on 24 January 1991, before conducting a port visit to Boston (21-23 February). On 1 August, she transited the Panama Canal before crossing the equator a week later. O’Bannon arrived back at her homeport on 13 December.

O’Bannon remained in Charleston until April, steaming out to participate in Ocean Venture 92 from 1-9 May 1992. On 5 July, O’Bannon and Yorktown (CG-48) became the first U.S. Navy ships to make a port visit to Severomorsk, homeport of the Russian Northern Fleet. This was also the first port call by a U.S. naval ship anywhere in Russia since the break-up of the Soviet Union. The destroyer attained the highest standards of battle readiness, receiving the Battle Efficiency “E” award and Command Excellence Awards for Maritime Warfare during that year.

O’Bannon remained in dry dock at the Charleston Naval Shipyard from 1 January-7 July 1993. On 18 November, the destroyer went smoke free, banning smoking within the skin of the ship and allowing it on the weather deck only. After a regular overhaul from 1 January-1 April 1994, O’Bannon participated in New York City’s Fleet Week 94. Her homeport shifted from Charleston, S.C., to Mayport, Fl., on 1 October.

From 3 March-22 August 1995, O’Bannon steamed to the Mediterranean for a six-month deployment. On 1 September, she was detached from DesRon 8 and reassigned to DesRon 24 as part of the reorganization of the U.S. Atlantic Fleet.

Spending most of January-December 1998 moored at her homeport of Mayport, O’Bannon sortied out on 11 June to participate in Sea-Launched Attack Missile Exercise (SLAMEX) 33-98, and remained underway for sea trials from 24-26 June. From 1-18 December, O’Bannon got underway with DesRon 14 to participate in patrol duties in the Persian Gulf as part of Operation SOUTHERN WATCH, before steaming to San Juan, P.R., for a port visit from 9-11 December.

In January 2000, while acting as flagship for DesRon 14, O’Bannon spearheaded a group sail involving several maneuvering, weapons, and tactical exercises. From 9-14 June, she participated in an antisubmarine warfare exercise. On 15 December, O’Bannon’s 22nd birthday, she steamed from Mayport to commence her U.S. Southern Command (SouthCom) deployment, later transiting the Panama Canal before entering the Pacific on 26 December to commence counter-narcotics operations.

Continuing her counter-narcotics operations into February 2001, O’Bannon returned to her homeport on 1 March before transiting up the St. John’s River to the Atlantic Dry dock facility to complete emergent repairs for a week. From 2-4 May, the destroyer participated in a bilateral exercise with the Peruvian Navy and Coast Guard, consisting of boarding operations and maritime interdiction. From October-December, O’Bannon received repairs in the Atlantic Dry dock Facility, and spent the holidays at her homeport.

After a two-week upkeep period from 1-17 January 2003, O’Bannon deployed to the Caribbean for the rest of the month. The destroyer participated in counter-narcotics operations in the western Caribbean from February-July, before steaming out for brief underway periods to conduct training exercises through early December. Transiting the Gulf of Mexico from 6-7 December, O’Bannon celebrated the holidays in port from 16 December 2003-12 January 2004.

From 14-15 August 2004, O’Bannon participated in a passing exercise (PASSEX) off the Florida coast. She began a routine six-month deployment to the Mediterranean on 29 November, in chopping from Second Fleet to Sixth Fleet on 2 December. On 15 December, O’Bannon celebrated 25 years of service while also remaining only one of five Spruance-class destroyers left in the U.S. Navy.

On 25 April 2005, O’Bannon assisted two crewmembers on board a 45-foot fishing vessel in the Mediterranean Sea, after receiving a distress signal and sighting an emergency flare from the fishing vessel off Corsica. 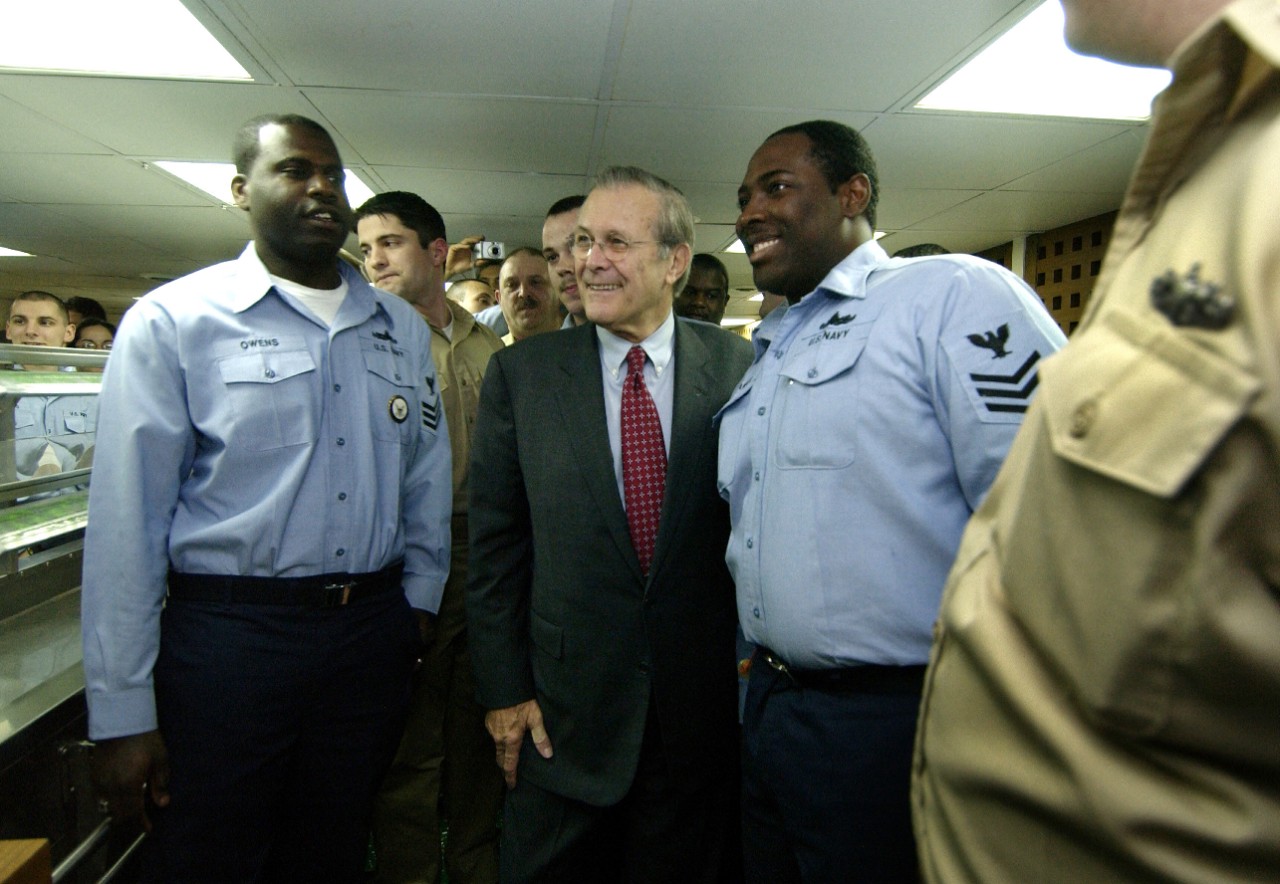 Secretary of Defense Donald H. Rumsfeld posed for photographs with Sailors aboard USS O'Bannon (DD-987) as the ship lies at anchor off the coast of Nice, France, on 9 February 2005. Rumsfeld was aboard the Spruance class destroyer to speak to the crew and present various awards including Sailor and Shiphandler of the Year. The Defense Secretary was in Nice to attend a conference with NATO Ministers of Defense. DoD photo by Tech. Sgt. Cherie A. Thurlby, U.S. Air Force. 050209-F-7203T-155_screen.jpg

O’Bannon was decommissioned and struck from the Naval Vessel Register on 19 August 2005.