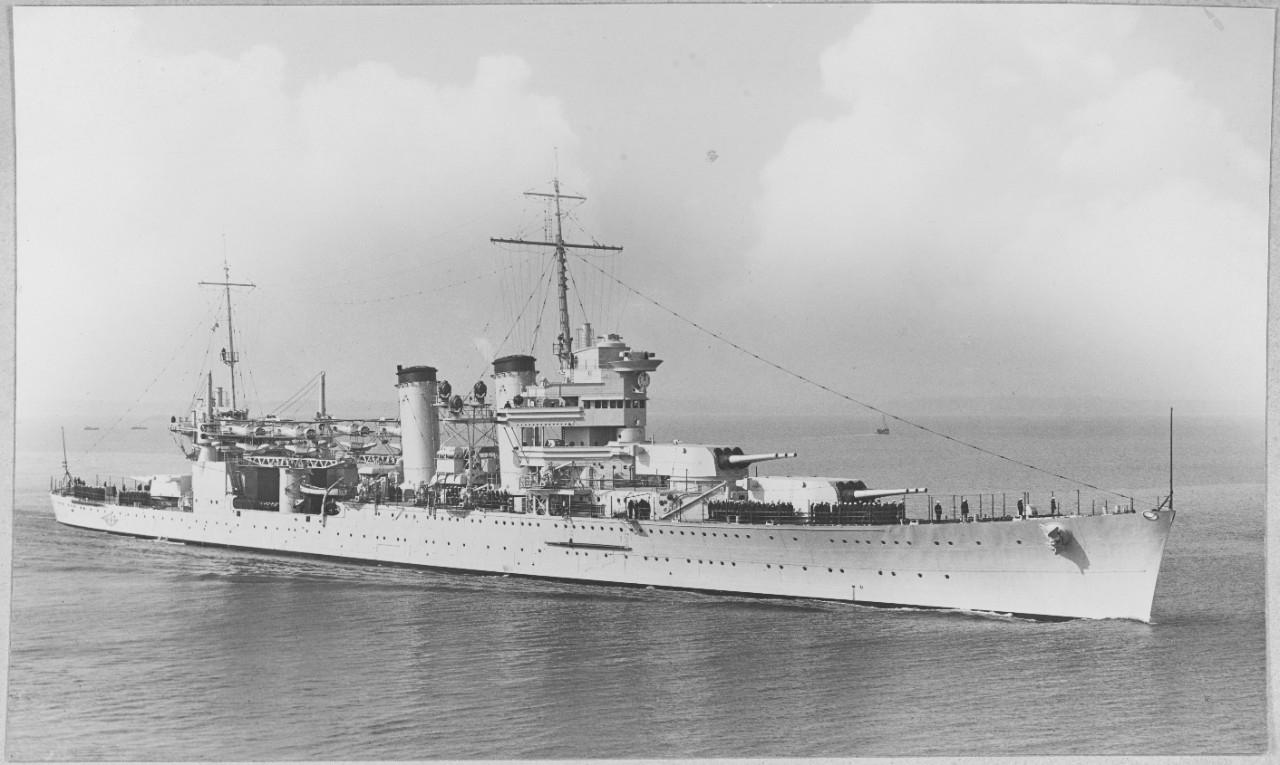 New Orleans, a ship-of-the-line, was laid down in January 1815 by Henry Eckford and Adam and Noah Brown at Sacketts Harbor, N.Y. Her building was halted upon conelusion of peace with Great Britain, and she remained on the stocks, housed over, until sold 24 September 1883 to H. Wilkinson, Jr., of Syracuse, N.Y.

New Orleans made a shakedown cruise to Northern Europe in May and June 1934, returning to New York 28 June. On 5 July she sailed to rendezvous with Houston, President Franklin D. Roosevelt embarked, for a cruise through the Panama Canal and an exercise with airship Macon and her brood of aircraft off California. The cruise ended at Astoria, Oreg., 2 August, and New Orleans sailed at once for Panama and Cuba. New Orleans exercised off New England into 1935, then visited her namesake city while en route to join Cruiser Division 6 in operations in the eastern Pacific for over a year. She returned to New York from 20 August to 7 December, 1936 and was once more in the Pacific early in 1937. Aside from winter training in the Caribbean early in 1939, she served out of California ports until joining the Hawaiian Detachment 12 October 1939 for exercises, training, and, as war drew close, vigilant patrol.

Moored in Pearl Harbor 7 December 1941, New Orleans was taking power and light from the dock, her engines under repair. With yard power out during the attack, New Orleans' engineers fought to raise steam, working by flashlight, while on deck men fired on the Japanese attackers with rifles and pistols. Though guns had to be worked by hand, within 10 minutes all her AA batteries were in action. A number of her crew were injured when a fragmentation bomb exploded close aboard.

The cruiser convoyed troops to Palmyra and Johnston; she then returned to San Francisco 13 January 1942 for engineering repairs and installation of new search radar and 20mm guns. She sailed 12 February commanding the escort for a troop convoy to Brisbane; from Australia she screened a convoy to Noumea, and returned to Pearl Harbor to join TF 11.

TF 11 sortied 15 April to join the Yorktown task force southwest of the New Hebrides. It was this joint force, together with a cruiser-destroyer group, which won the great Battle of the Coral Sea 7-8 May, driving back a southward thrust of the Japanese which threatened Australia and New Zealand and their seaborne life lines. This mighty duel of carrier aircraft was not without price; Lexington was mortally wounded and New Orleans stood by, her men diving overboard to rescue survivors and her boat crews closing the burning carrier, oblivious to the dangers of flying debris and exploding ordnance as they saved 580 of Lexington's crew who were landed at Noumea. New Orleans then patrolled the eastern Solomons until sailing to replenish at Pearl Harbor.

New Orleans sailed 28 May screening Enterprise, to surprise the Japanese in the Battle of Midway. On 2 June, she made rendezvous with the Yorktown force, and two days later joined battle. Three of the 4 Japanese carriers were sunk by hits scored in the dive bomber attacks; the fourth went down later, but not before her dive bombers had damaged Yorktown so badly she had to be abandoned. New Orleans, veteran of the battle that halted Japanese expansion southward, had now played a significant role protecting her carrier in the great victory that turned back Japan's eastward movement and heavily crippled her naval air arm in a decisive battle.

Again New Orleans replenished at Pearl Harbor, sailing 7 July to rendezvous off Fiji for the invasion of the Solomons, during which she screened Saratoga. Fighting off vicious enemy air attacks 24-25 August, New Orleans aided the Marines holding the precious toehold on Guadalcanal, as a Japanese landing expedition was turned back in the Battle of the Eastern Solomons. When Saratoga was torpedoed 31 August, New Orleans guarded her passage to Pearl Harbor, arriving 21 September.

With the repaired carrier, New Orleans sailed to Fiji early in November, then proceeded to Espiritu Santo, arriving 27 November to return to action in the Solomons. With four other cruisers and six destroyers she fought in the Battle of Tassafaronga on the night of 30 November, engaging a Japanese destroyer transport force. When flagship Minneapolis was struck by two torpedoes, New Orleans, next astern, was forced to sheer away to avoid collision, and ran into the track of a torpedo which ripped off her bow. Bumping down the ship-s port side, the severed bow punched several holes in New Orleans' hull. A fifth of her length gone, slowed to 2 knots, and blazing forward, the ship fought for survival. Individual acts of heroism and self-sacrifice along with skillful seamanship kept her afloat, and under her own power she entered Tulagi Harbor near daybreak 1 December. Camouflaging their ship from air attack, the crew jury-rigged a bow of coconut logs, and 11 days later New Orleans sailed to replace a damaged propeller and make other repairs in Sydney, Australia, arriving 24 December. On 7 March 1943, she was underway for Puget Sound Navy Yard, where a new bow was fitted and all battle damage repaired.

Returning to Pearl Harbor 31 August for combat training, New Orleans next joined a cruiser-destroyer force to bombard Wake, 5-6 October, repulsing a Japanese torpedo-plane attack. Her next sortie from Pearl Harbor came 10 November when she sailed to fire preinvasion bombardment in the Gilberts 20 November, then to screen carriers striking the eastern Marshalls 4 December. In aerial attacks that day, the new Lexington, namesake of the carrier whose men New Orleans had pulled from the Coral Sea, was torpedoed, and New Orleans guarded her successful retirement to repairs at Pearl Harbor, arriving 9 December.

From 29 January 1944, New Orleans fired on targets in the Marshalls, hitting air installations and shipping as the Navy took Kwajalein. She fueled at Majuro, then sailed 11 February to join the fast carriers in a raid on Truk, Japanese bastion in the Carolines 17-18 February. While air strikes were flown, New Orleans with other warships circled the atoll to catch escaping ships; the task force's combined gunfire sank a light cruiser, a destroyer, a trawler, and a submarine chaser. The force sailed on to hit the Marianas, then returned to Majuro and Pearl Harbor.

The carriers, with New Orleans in escort, again heaped destruction on targets in the Carolines late in March, then in April sailed south to support Allied landings at Hollandia, New Guinea. There 22 April a disabled Yorktown plane flew into New Orleans' mainmast, hitting gun mounts as it fell into the sea. The ship was sprayed with gas as the plane exploded on hitting the water; one crewmember was lost, another badly injured, but New Orleans continued in action, patrolling and plane guarding off New Guinea, then joining in further raids on Truk and Satawan, which she bombarded 30 April. She returned to Majuro 4 May.

Preparations were made in the Marshalls for the invasion of the Marianas, for which New Orleans sortied from Kwajalein 10 June. She bombarded Saipan 15 and 16 June, then joined the screen protecting carriers as they prepared to meet the Japanese Mobile Fleet in the Battle of the Philippine Sea. In this last major carrier combat the Japanese were able to mount, American naval aviators and submariners sank three enemy carriers and destroyed almost every aircraft launched against them, 395 in all. The few enemy planes which penetrated to the American carriers were shot down by New Orleans and other escorts. The Marianas operation continued, and Japanese naval aviation was virtually nonexistent after this great victory of 19-20 June. 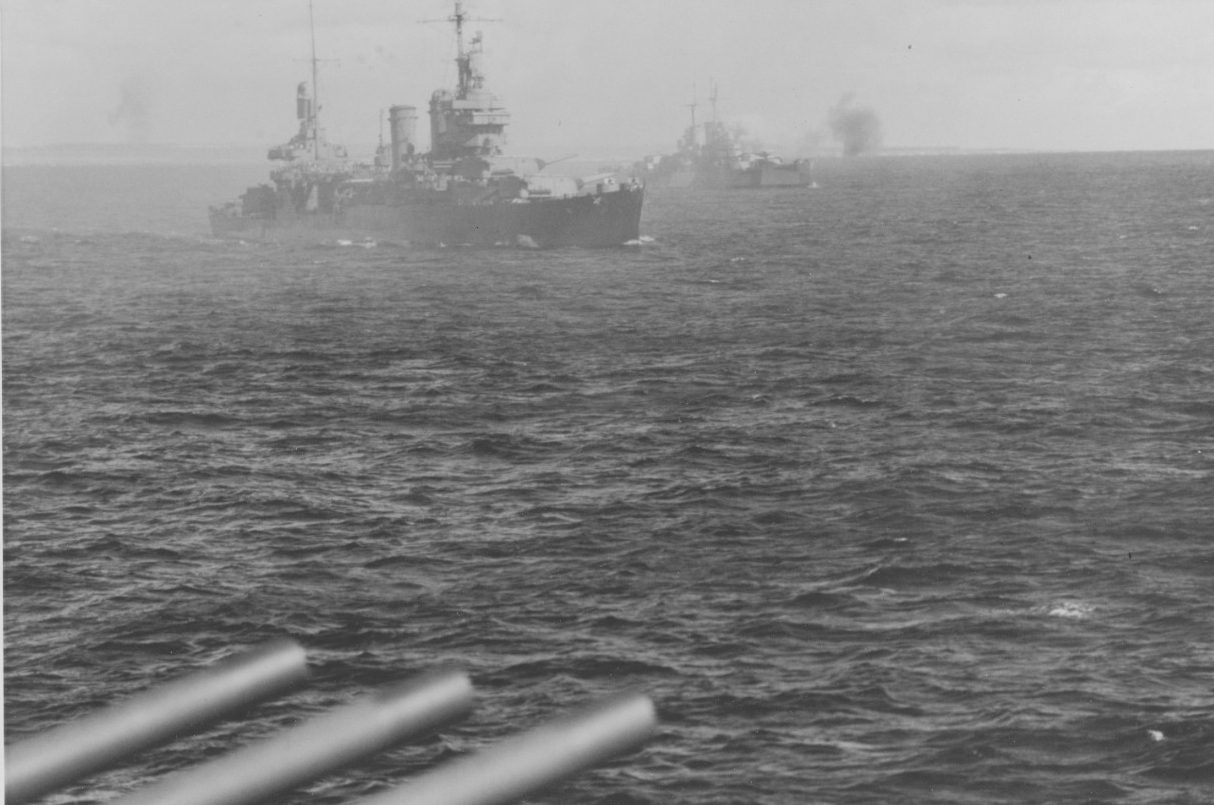 New Orleans made patrols and bombardments on Saipan and Tinian into August, returned to Eniwetok the 13th, and sailed the 28th for carrier raids on the Bonins, bombardments of Iwo Jima 1-2 September, and direct air support for the invasion of the Palaus. After reprovisioning at Manus, the task force assaulted Okinawa, Formosa, and Northern Luzon, destroying Japanese land-based aviation which otherwise would have threatened the landings on Leyte 20 October. The carriers continued to send raids aiding troops ashore, as they prepared to meet the Japanese, who were sending almost every surface ship left afloat in one great effort to break up the Philippines operation. New Orleans guarded her carriers as they joined in the great Battle for Leyte Gulf, first attacking the Japanese Southern Force 24 October, then raiding the Center Force in the Sibuyan Sea, and next destroying the Japanese Northern Force of decoy carriers in the Battle off Cape Engano. The carriers then sped south to aid the gallant escort carriers holding off the powerful Japanese battleshipcruiser force in the Battle off Samar. A stunning American victory was followed by strikes against the retreating Japanese remnant.

After replenishing at Ulithi, New Orleans guarded carriers during raids throughout the Philippines in preparation for the invasion of Mindoro, then late in December sailed for a Mare Island overhaul, followed by training in Hawaii. She returned to Ulithi 18 April 1945, and two days later departed to give direct gunfire support at Okinawa, arriving 23 April. Here she dueled with shore batteries and fired directly against the enemy lines. After nearly two months on station, she sailed to replenish and repair in the Philippines, and was at Subic Bay when hostilities ceased.

New Orleans sailed 28 August with a cruiser-destroyer force to ports of China and Korea. She covered the internment of Japanese ships at Tsingtao, the evacuation of liberated Allied prisoners-of-war, and the landing of troops in Korea and China, until sailing 17 November from the mouth of the Peking River, carrying veterans homeward bound. More returning troops came aboard at Sasebo, and all were disembarked at San Francisco 8 December. After similar duty took her to Guam in January 1946, she sailed through the Panama Canal for a 10-day visit to her namesake city, then steamed to Philadelphia Navy Yard, arriving 12 March. There she decommissioned 10 February 1947 and lay in reserve until struck from the Navy List 1 March 1959 and sold for scrapping 22 September 1959 to Boston Metals Co., Baltimore, Md. 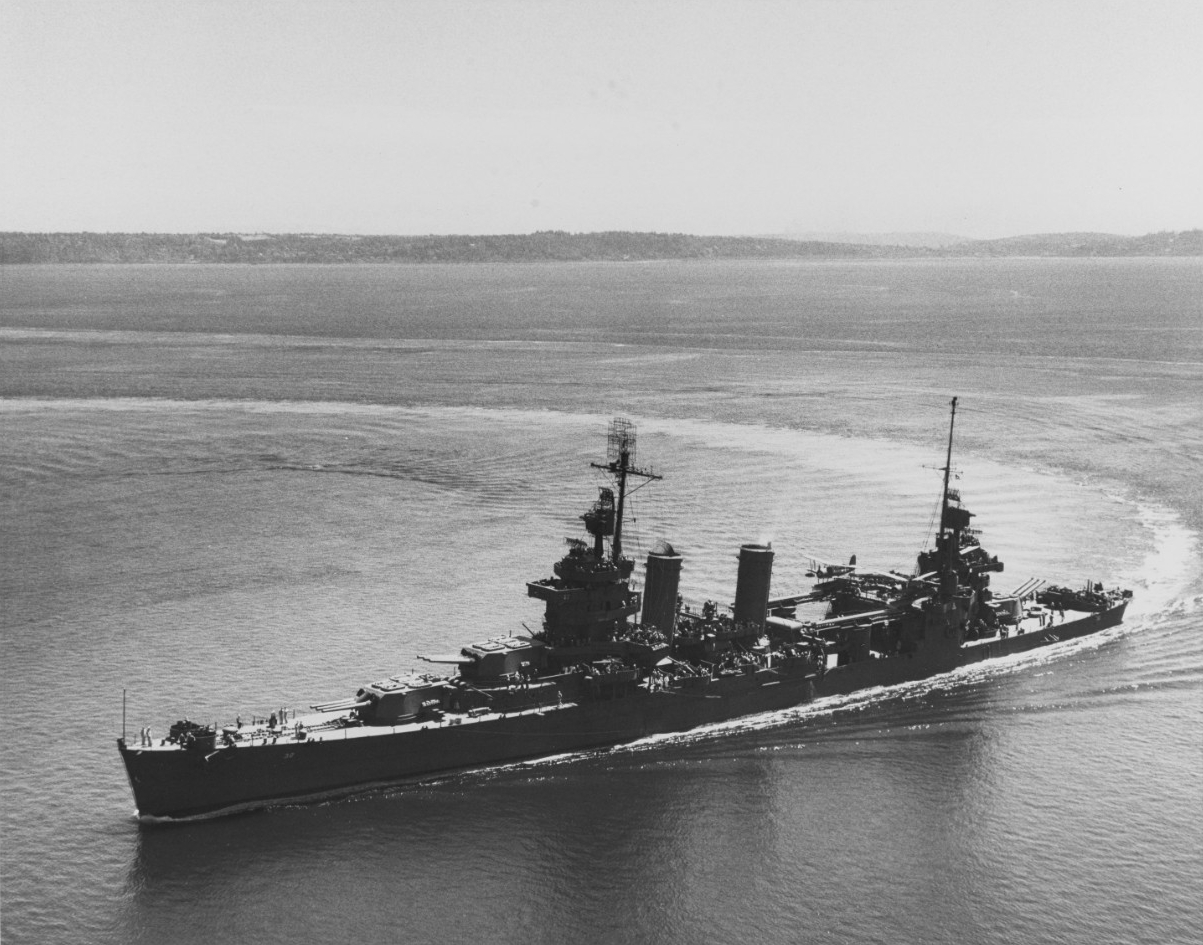 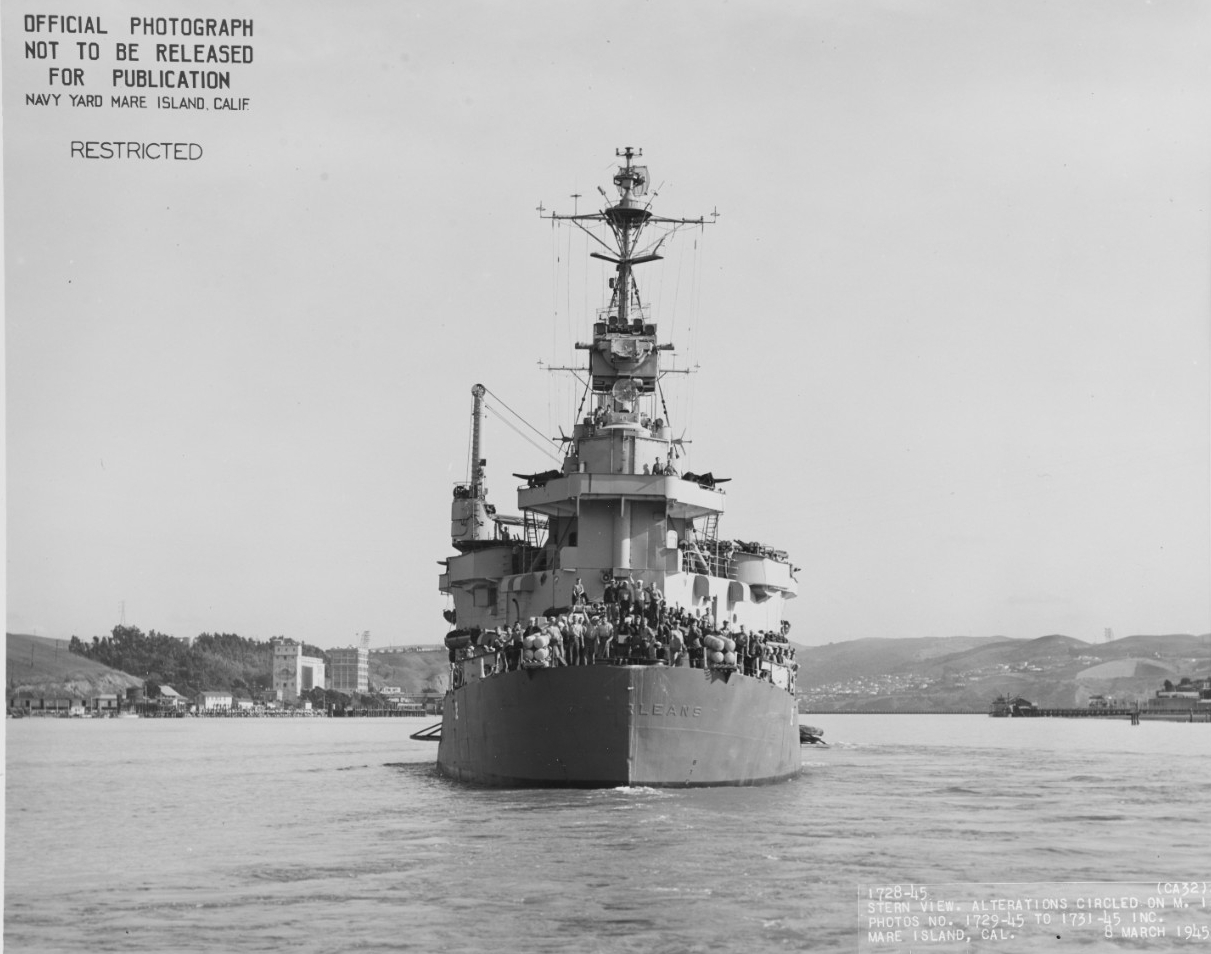