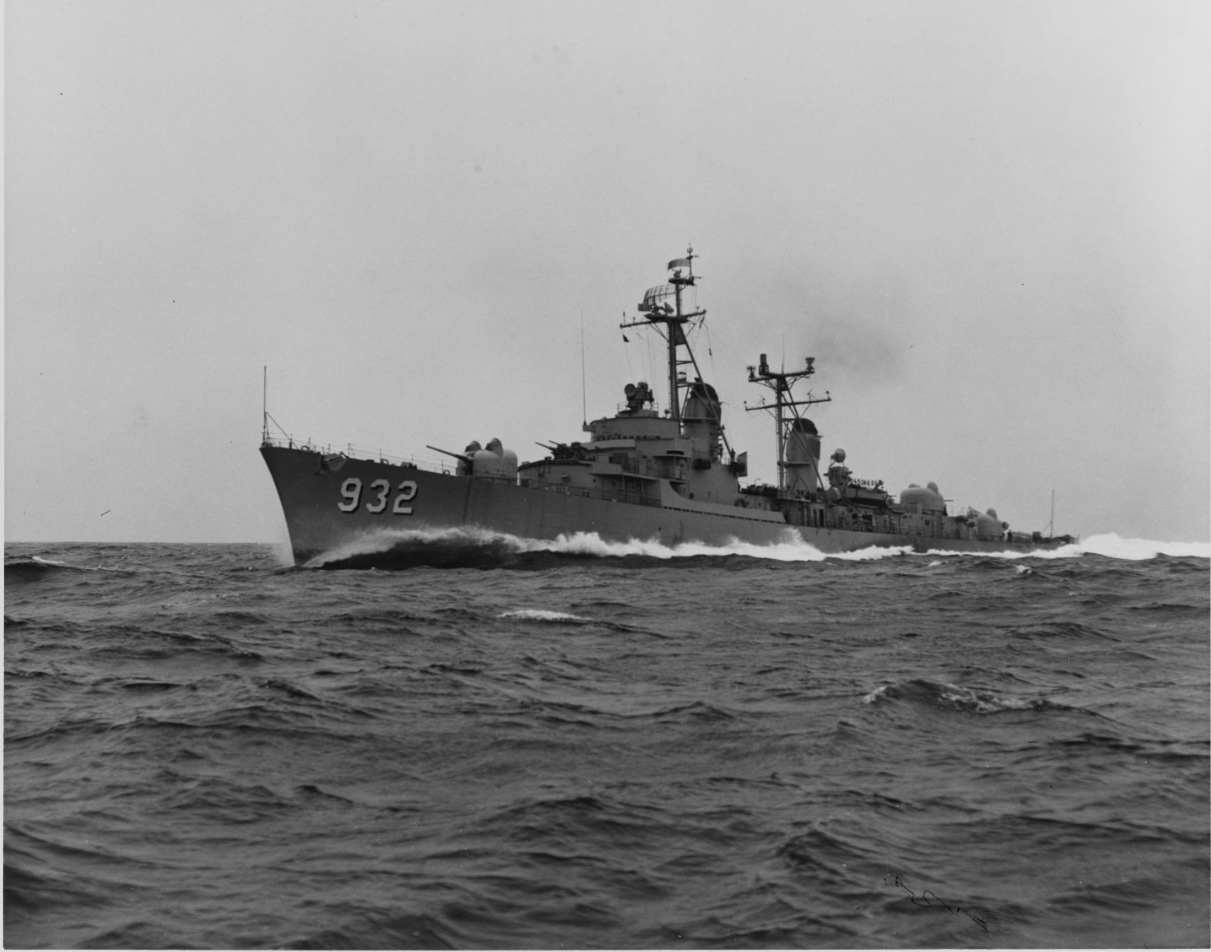 John Paul Jones (DD-932) underway at high speed while running sea trials off the New England Coast, 25 March 1956. She was commisioned on 5 April 1956 at Boston. Official U.S. Navy photograph from the collections of the Naval History and Heritage Command, NH 106790.

John Paul was born at Arbigland, Kirkbean, Kirkcudbright, Scotland, 6 July 1747. Apprenticed to a merchant at age 13, the lad went to sea in brig Friendship to learn the art of seamanship. At 21, he received his first command, brig John. After several successful years as a merchant skipper in the West Indies trade, John Paul immigrated to the Continental British colonies and there added Jones to his name. In the summer of 1775, the Continental Congress commissioned him Lieutenant in the first American Navy. As First Lieutenant of Alfred, John Paul Jones was the first man to hoist the Grand Union flag on a continental warship, 3 December 1775. During the early part of 1776, he participated in the attack on New Providence, Nassau. Later that year, as Captain of Providence and Alfred, he made daring cruises between Bermuda and Nova Scotia, inflicting much damage on British shipping. 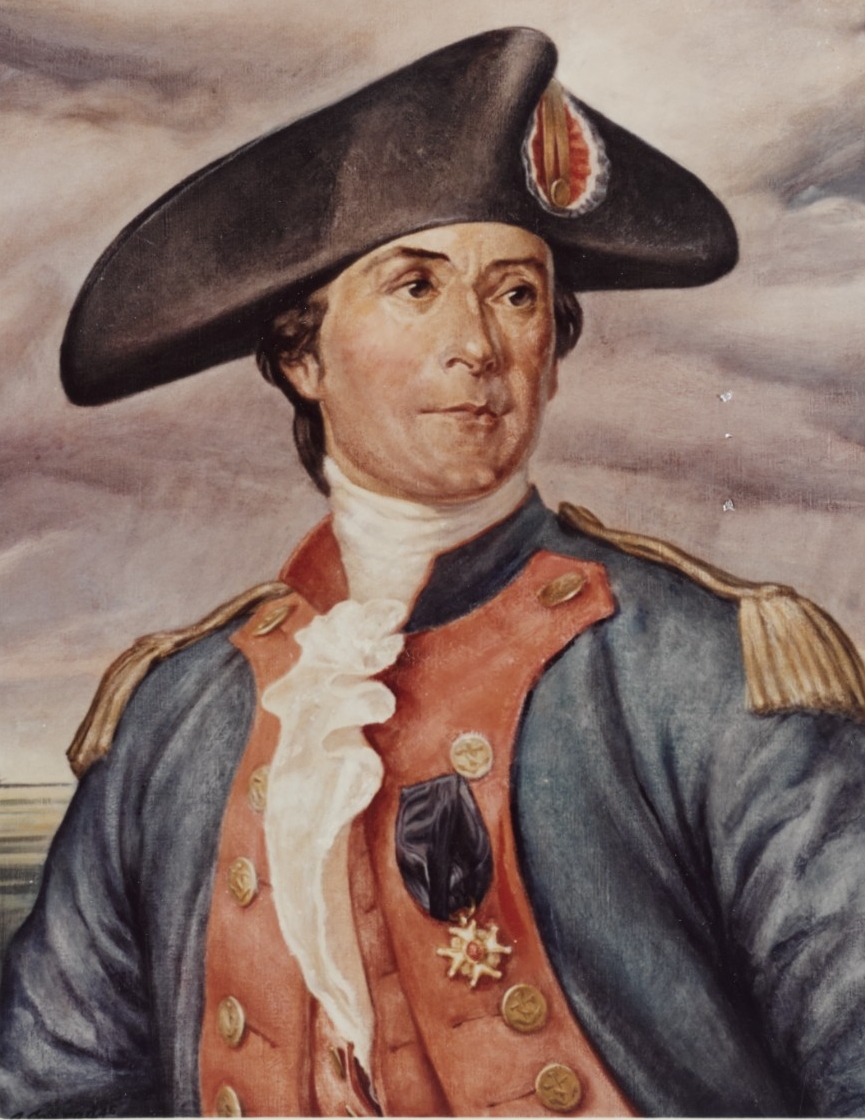 On 1 November 1777, he sailed for France in Ranger, carrying dispatches for the American commissioner and word of Burgoyne's surrender at Saratoga. Admiral La Motte Piquet returned Jones' salute at Quiberon Bay, France, 14 February 1778, the first time the new "stars and stripes" were recognized by a foreign power. Ranger subsequently raided the British coast and, in a notable engagement off Belfast, Ireland captured British sloop-of-war Drake.

Early in 1779, the French King gave Jones the ancient East Indiaman Duc de Duras, which he refitted and renamed Bon Homme Richard, as a compliment to Benjamin Franklin. Commanding four other ships and two French privateers, he sailed 14 August 1779 to raid English shipping.

On 23 September 1779, his ship accompanied by Pallas engaged British Serapis and Countess of Scarborough off Famborough Head, Yorkshire. During this bloody and desperate battle, Captain Pearson of the Serapis, seeing the shambles on the deck of the Bon Homme Richard, asked if the American ship had surrendered. Jones's immortal reply "I have not yet begun to fight," served as a rallying cry to the crew of the badly-shattered Richard; and they went on to capture Serapis. Jones was forced to transfer to Serapis when his gallant Bon Homme Richard sank the next day. For this extraordinary victory, not only did Congress pass a resolution thanking him, Louis XVI also presented him with a sword.

After the war, Commodore Jones was active in Paris negotiating prize money claims. In 1788, he entered the service of Empress Catherine of Russia with the rank of Rear Admiral, but retained his American citizenship. Although he successfully commanded the Black Sea Squadron, court intrigues forced Jones to leave Russia.

He returned to Paris in 1790 where he died 18 July 1792. The site of his burial was long forgotten; but American Ambassador Horace Porter began a systematic search for it in 1899. His body was eventually discovered, and in 1905, a special squadron of U.S. Navy ships brought it to America to be interred at the Chapel of the Navy Academy. Brilliant seaman, leader, and man of great courage, John Paul Jones was one of the true founders of the Navy's great traditions.

John Paul Jones, second of the initial class destroyers of post-war design, conducted exhaustive shakedown training out of Guantanamo Bay, Cuba, after which she departed for a cruise to Northern Europe and the British Isles. During this voyage, Commander Hayler and members of the crew visited the birthplace of John Paul and presented the ship's emblem to the people of Kirkcudbright. She returned to her homeport, Newport, 8 October 1956.

The new destroyer departed for her first cruise with Sixth Fleet 25 March 1957. In May, she took part in a graphic illustration of the power of that naval force, swiftly projected where needed, as leftist attempts to overthrow King Hussein of Jordan were foiled by American warships offshore. After helping to avert this crisis, John Paul Jones sailed for Newport once more, arriving 6 June 1957. NATO maneuvers in the North Atlantic followed in October. After another brief cruise to the Mediterranean, she arrived Fall River 27 November, and in January 1958, she took part in fleet exercises in the Caribbean.

In the spring of 1958, John Paul Jones operated with Canadian ships on training maneuvers in the Atlantic. After further training off the East Coast and in the Caribbean, she sailed again for the Mediterranean 17 March 1959. This tour with the vital 6th Fleet on its peace-keeping mission ended 24 July when the ship arrived Boston.

The year 1960 began with 2d Fleet operations out of Newport, and in June the destroyer embarked midshipmen for a training cruise. She then departed 22 August for a cruise to South America. As part of Operation "Unitas," she circumnavigated the continent, visiting many of America's southern allies and taking part in joint exercises with their navies. After transiting the Straits of Magellan and the Panama Canal, John Paul Jones returned to Newport 13 December 1960. During 1961 and 1962, the ship carried out antisubmarine exercises in the Caribbean and out of Newport. In April 1962, she took part in a fleet review and weapons demonstration for President Kennedy, and in July, she again embarked  midshipmen for training. In October 1962, the ship was on station with the Atlantic Recovery Forces during the orbital flight of Commander Schirra, and soon afterward moved off the coast of Cuba during the Cuban Crisis. As American naval power in the form of a quarantine forced the removal of offensive missiles from the island, the decisive role of the country's modern navy was again emphasized.

The following year saw the veteran ship embark on another Mediterranean cruise 6 February to 1 July; the remainder of 1963 was spent on antisubmarine exercises in the Atlantic.

Operations along the Atlantic Coast continued until John Paul Jones began another 6th Fleet deployment 20 June 1964. She operated primarily in the western Mediterranean, on ASW assignments until returning home 3 September 1964. Early in 1965, she participated in Operation "Spring board" in the Caribbean. In March, the destroyer received a Gemini recovery crane and on the 19th sailed for her recovery station some 200 miles south of Bermuda. She was to pick up astronauts Major Virgil Grissom and Lt. Cmdr. John Young and their spacecraft in the event that they ended their flight after two rather than the three scheduled orbits. However, all went well so she returned to Norfolk 27 March without headlines.

John Paul Jones headed back to the Mediterranean 18 June for NATO exercises with units of the French. Greek and British navies. She returned to Norfolk 6 November, sailed to Philadelphia 2 December, and entered the Naval Shipyard and decommissioned 20 December for conversion to a guided missile destroyer. Reclassified DDG-32, she recommissioned in the fall of 1967.