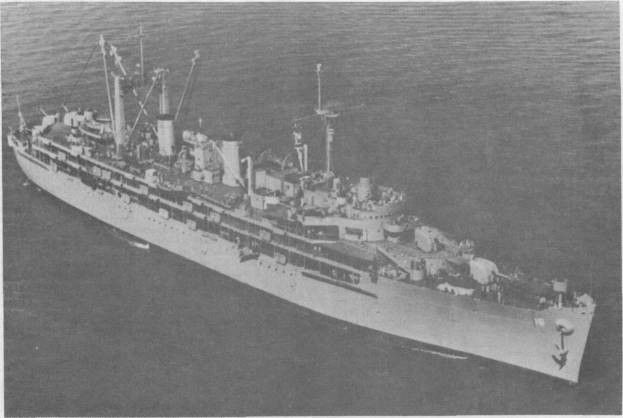 Howard Walter Gilmore was born in Selma, Ala., 29 September 1902 and enlisted in the Navy 15 November 1920. In 1922 he was appointed to the Naval Academy and after commissioning in 1926 reported to battleship Mississippi. Gilmore underwent submarine training in 1930 and in the years that followed served in various submarines and at stations ashore. In 1941 he assumed his first command, Shark, only to be transferred the day following Pearl Harbor to take command of the still-unfinished Growler. Gilmore commanded his submarine skillfully during three Pacific war patrols, receiving the Navy Cross for an attack on enemy destroyers during the first and a gold star in lieu of a second Navy Cross for the second. The submarine continued to take a heavy toll of shipping on her fourth war patrol, and on the night of 6-7 February 1943 she approached a convoy stealthily for a surface attack. Suddenly a fast gunboat closed and prepared to ram. Commander Gilmore skillfully outmaneuvered his opponent and rammed him at 17 knots, seriously damaging Growler. What followed Is perhaps most eloquently expressed in the official citation: "In the terrific fire of the sinking gunboat's heavy machine guns, Commander Gilmore calmly gave the order to clear the bridge, and refusing safety for himself, remained on deck while his men preceded him below. Struck down by the fusillade of bullets and having done his utmost against the enemy, in his final living moments Commander Gilmore gave his last order to the Officer of the Deck, 'Take her down !' The submarine dived; damaged but under control, she was brought safely to port by her well-trained crew inspired by the courageous fighting spirit of their captain." Commander Gilmore received the Medal of Honor posthumously, and his inspiring words and courageous sacrifice have taken their place among the great traditions of the U.S. Navy.

Howard W. Gilmore arrived Majuro Atoll 19 September 1944, and began her vital tending duties. In the 4 months that followed she made voyage repairs on submarines, replenished them, and helped in training both crewmen and repairmen. She thus did much to maintain the high-intensity attack on Japanese shipping which hastened the end of the war. The ship also provided repairs and parts for surface ships when necessary. Returning to Pearl Harbor 29 January 1945, she took on replacement crews for Australia-based submarines and sailed for Brisbane, arriving 23 February. But the busy tender was soon underway again, this time sailing via Humboldt Bay to Subic Bay, Philippines, with supplies for an advanced base. Howard W. Gilmore arrived 13 March and immediately started refitting 7th Fleet subs and setting up a recuperation area for their crews. She continued this duty through the climactic days of the Pacific war, sailing for the East Coast, via Pearl Harbor and Panama 31 August 1945. Arriving New York 17 October, Howard W. Gilmore took part in the joyous Navy Day celebrations in New York Harbor, where the fleet was reviewed by President Truman.

After a short stay in New London, Conn., Howard W. Gilmore steamed to Portsmouth, N.H., to load torpedoes and then sailed to her new home port, Key West, where she arrived 25 January 1946. Serving Submarine Squadron 4, the ship was to stay in Florida for the greater part of the next 13 years, serving submarines on their far-flung training and readiness duties. The ship occasionally tended submarines at Norfolk, and deployed to the Caribbean twice during this period, notably for Operation Springboard, a giant fleet exercise in the Caribbean in 1958.

Howard W. Gilmore sailed into storied Charleston harbor 30 July 1959 to take up her tending duties from this new base. In addition to servicing submarines during the next 18 months, the ship rode out Hurricane Donna in September 1960 off Charleston. During 1961 she operated off the Florida coast before entering Charleston Naval Shipyard in November for a major overhaul. During this repair period Howard W. Gilmore was fitted with facilities for servicing nuclear submarines, increasing her versatility and usefulness for today's nuclear Navy. With this important Fleet Rehabilitation and Modernization Overhaul (FRAM) completed the ship returned to the Caribbean for refresher training 'before resuming tender duties at Charleston.

In October 1962 the introduction of offensive missiles into Cuba brought strong response from the American President and people-a naval quarantine of the island. Howard W. Gilmore's crew worked 'round the clock servicing two squadrons of submarines for Caribbean operations. American naval power forced the removal of the Communist threat to the Western Hemisphere.

From 1963 into 1967, the veteran tender continued to serve submarines from her home port, Charleston, making short cruises for training off the South Carolina coast and in the Caribbean. Howard W. Gilmore and her sister tenders fulfill the goal expressed in the slogan: "Service for the silent service".