Frank Jack Fletcher was born in Marshalltown, Iowa, on 29 April 1885. He gained appointment to the U.S. Naval Academy, Annapolis, Md., in 1902. He graduated on 12 February 1906, and served the required (at that time) mandatory two years of sea duty. Commissioned an ensign on 13 February 1908, Lt. Fletcher received the Medal of Honor award for actions at Vera Cruz, Mexico (21–22 April 1914).

During World War I, Fletcher served as Gunnery Officer on board Kearsarge (Battleship No. 5) until September 1917. In May 1918, Fletcher was awarded the Navy Cross while serving as the commanding officer of Benham (Destroyer No. 49). During World War II, Adm. Fletcher led U.S. naval forces at the Battle of the Coral Sea (4–8 May 1942), and a month later served in carrier Yorktown (CV-5) as Commander, Carrier Task Force 17, during the pivotal Battle of Midway (4–7 June).

Later commanding two of the three task forces involved in the Guadalcanal-Tulagi landings (7–8 August 1942), Adm. Fletcher also served as Commander, North Pacific Force (COMNORPAC), and conducted the first bombardment of the Japanese-held Kurile Islands. Other awards include the Navy Cross, Distinguished Service Medal, Army Distinguished Service Medal, and a Purple Heart medal, for wounds received while on board Saratoga (CV-3) on 31 August 1943.

Eventually attaining the rank of vice admiral on 26 June 1942, Adm. Fletcher retired on 1 May 1947, with the rank of full admiral. He died on 25 April 1973, at the Bethesda Naval Hospital in Bethesda, Md. 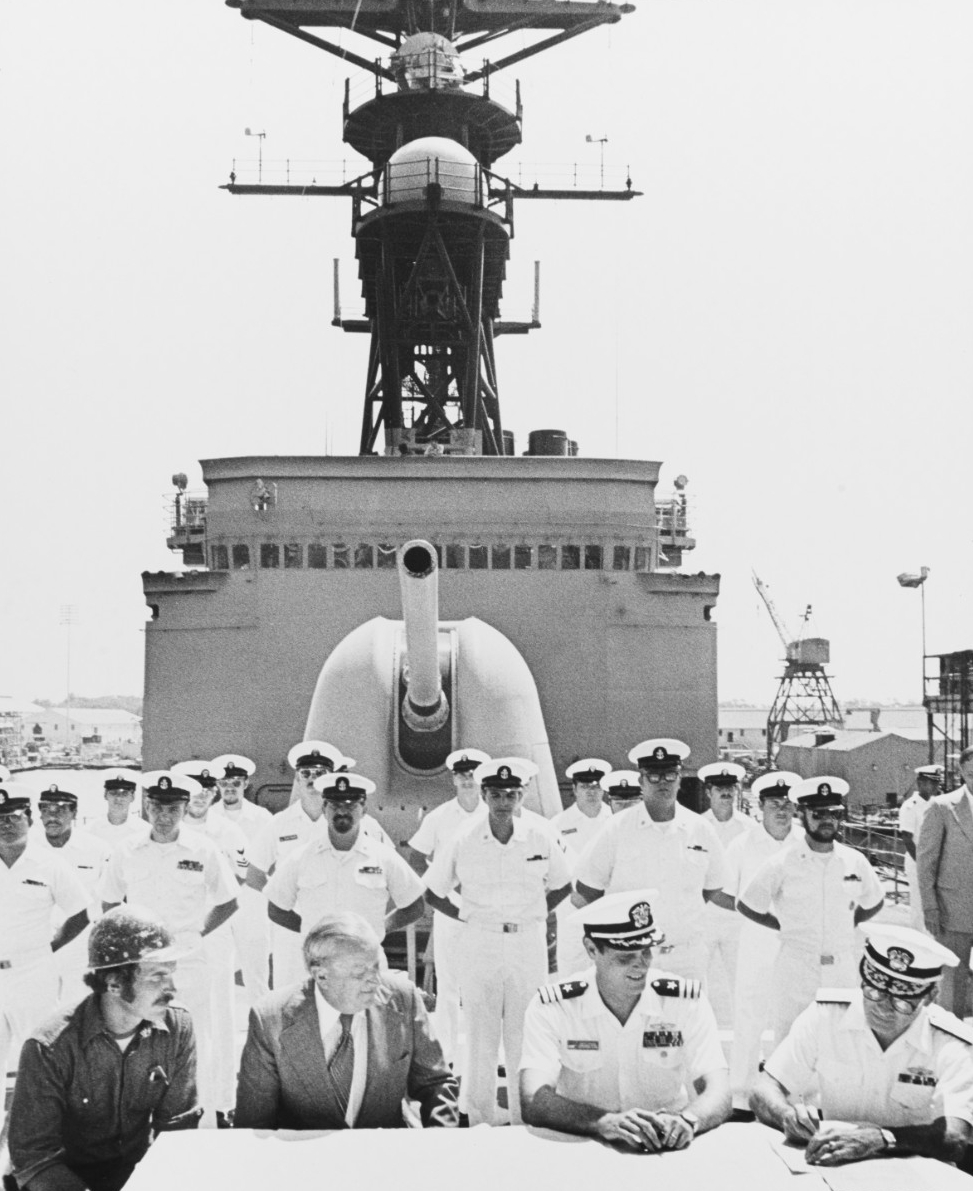 On board Fletcher (DD-992), Rear Adm. William C. Wyatt, Supervisor of Shipbuilding at Pascagoula, Miss., signs the document accepting the ship from her builders, in a ceremony at the Ingalls Shipyard, on 16 June 1980. Looking on are Cmdr. Steven C. Saulnier, the ship's prospective commanding officer (2nd from right), Ingalls Shipbuilding President Len Erb (2nd from left), and George M. Nall (left), an Ingalls ship fitter who had previously worked on all 30 Spruance class destroyers and represented the entire Ingalls workforce at the ceremony. Fletcher was the final ship of the original 30 in that class. (Naval History and Heritage Command Photograph NH 96842)

Making way from San Diego, Fletcher arrived at Pascagoula for three months of post-shakedown availability (31 January–2 May 1981). Crossing the Equator, the polliwogs on board received an initiation into King Neptune’s realm (11 May).  In October, Fletcher underwent a retrofit period before participating in READIEX 1-82.

Getting underway for Hawaii on her maiden deployment to the Western Pacific (WestPac), Fletcher participated in TRANSITEX 7-82 (12–19 February 1982), with vessels from DesRon 5. Continuing the exercise after a port visit at Pearl Harbor, Hawaii, Fletcher made way for Guam (6 March) before steaming with elements of the Republic of Korea (ROK) Navy during TEAM SPIRIT 92 in the Sea of Japan (26–30 March). After a brief period of repairs in Yokosuka, Japan, the destroyer got underway with the Midway (CV-41) Battle Group (BG) for READEX 2-82 (29 April).

After a Fourth of July picnic at Subic Bay, Philippines, Fletcher stood out to participate in MISSILEX 82-13 in the South China Sea (9–10 July 1982). While steaming in the South Pacific, the destroyer crossed the equator at the Prime Meridian, allowing all crew members to earn the title “Golden Shellback” (4 August). During the first week of October, Fletcher performed plane guard duties for Constellation (CV-64). The destroyer made way to San Francisco for Fleet Week ’82 (15–23 October), before ending the year in restricted availability.

Fletcher departed for her second WestPac deployment on 15 July 1983 with BG Echo, before receiving orders to divert south to the coast off El Salvador and Nicaragua to support U.S. policies in the area (25 July–12 August). The destroyer than made way to Pearl Harbor before conducting anti-submarine warfare (ASW) exercises in the Hawaiian operational area (25–28 August), before she steamed for the Indian Ocean (27 September).

While commencing transit via the Strait of Malacca, Fletcher received orders to investigate reports of a boat carrying possible Vietnamese refugees adrift in the South China Sea. Arriving on the scene, she discovered a small craft with 39 refugees. The boat, adrift with a broken rudder and without power, remained in the sea, due to special operations in the area. Fletcher crewmen provided the Vietnamese with food and water until guided missile destroyer Benjamin Stoddert (DDG-22) arrived to complete the rescue efforts (28–29 September 1983).

While operating in the North Arabian Sea, Fletcher carried out surveillance and escort duties. She became the first U.S. Navy ship to visit Port Victoria, Seychelles, in four years (4 –7 December 1983). After 101 days at sea, the destroyer made way to Subic Bay to begin an availability period with destroyer tender Acadia (AD-42—25 January 1984). She made way for Pearl Harbor, arriving with other ships of her battle group before steaming en route for San Diego (6 –21 February). Fletcher began an upkeep period upon arrival at her homeport (29 February–2 April).

After shifting to DesRon 17 in May 1984, Fletcher conducted a series of naval gunfire exercises off San Clemente Island. Getting underway with Carl Vinson (CVN-70) for plane guard duties (1 May), the destroyer hosted the Japanese Maritime Self Defense Force vessel Hatsayuki (21 May). Fletcher conducted COMPUTEX 85-1 with the Constellation BG while steaming to San Francisco (1 October). After a port visit there, the destroyer got underway for FLEETEX and participated in TRANSITEX 85-1 while en route to Pearl Harbor (13–31 October). Returning to San Diego on 14 December, Fletcher entered the dry dock at National Steel and Shipbuilding Corp., for emergency repairs to her sonar dome in preparation for an upcoming deployment (29 December 1984–23 February 1985).

While en route from Mazatlán, Mexico, to San Diego, Fletcher received message traffic on a bridge-to-bridge radio from the fishing vessel JoAnn. Reporting a casualty to her main engine, JoAnn also claimed to have been adrift for ten days, low on food, water, and fuel. In addition, she had an injured crewmember on board needing emergency evacuation and medical attention. After a brief search, Fletcher located and closed the stricken vessel, transferring a team via motor whaleboat to assess the engineering casualty and to render first aid. The injured crewmember, suffering from cellulitis and in the first stages of gangrene, was in danger of losing both feet through amputation if he did not receive medical attention in 3–5 days. The destroyer transported the injured crewmember back to San Diego, after providing JoAnn food, water, and an emergency pump. Fletcher later received the Humanitarian Service Medal for the rescue (3–5 May 1988). 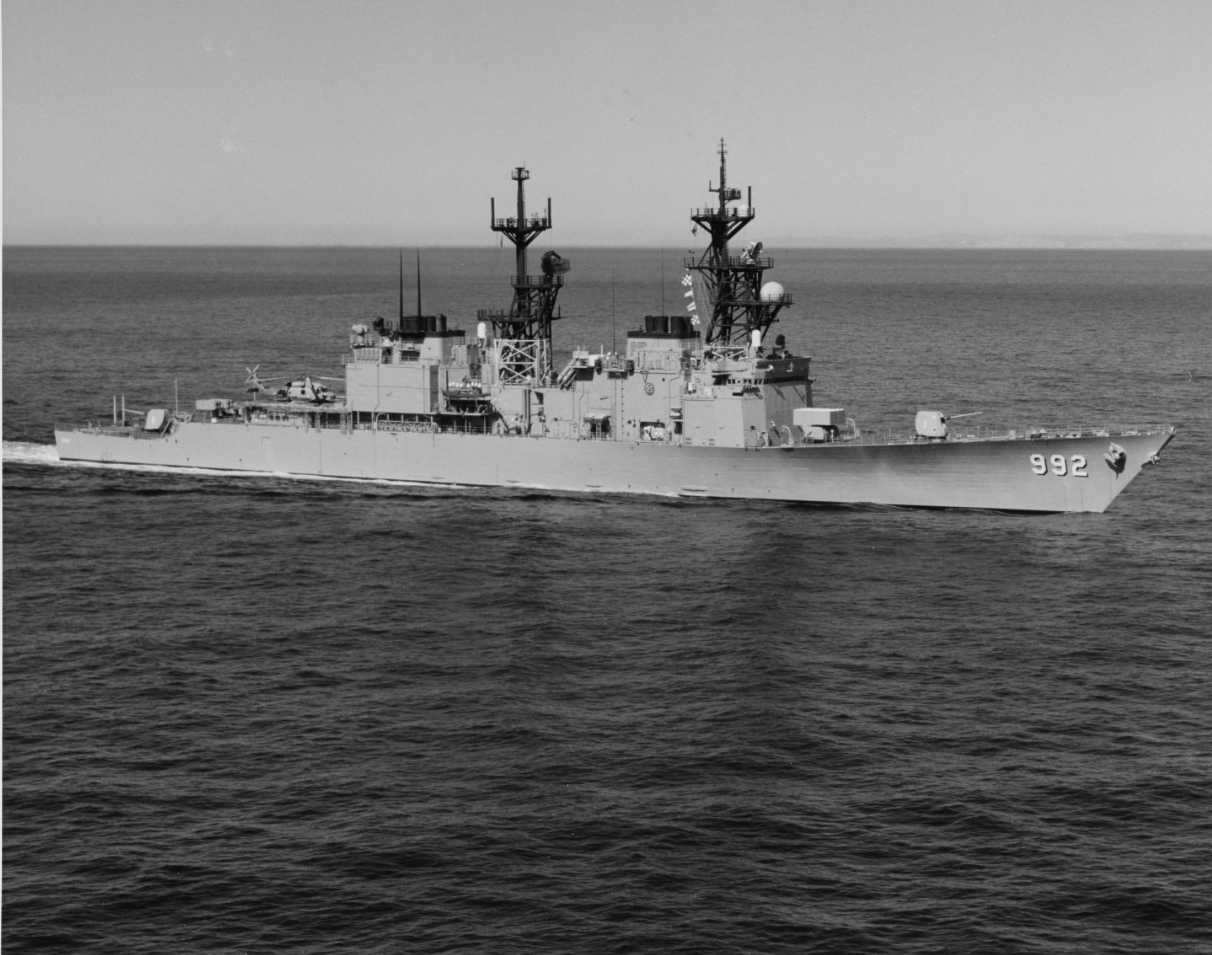 Fletcher got underway with DesRon 31 for a three-month “mini-deployment” which included the exercises PACEX 89, MARCOT 2-89, Gulf of Alaska operations, Mobile Sea Range operations, ASWOP 90-1, VALIANT BLITZ, and ASWEX 90-1k. All these exercises were primarily ASW-related (12 September 1989). The destroyer visited Sasebo, Japan (27–30 October), and Busan, Korea (31 October–5 November), before accomplishing upkeep in Yokosuka (13–17 November). She steamed for Pearl Harbor for exercises and a visit (30 November–4 December) before making way to San Diego (5–12 December).

Fletcher prepared for a homeport move to Pearl Harbor during the year 1991, and after a dry dock period at Pearl Harbor Naval Shipyard, the destroyer left for her fifth deployment in March 1992. The crew delivered 4,000 pounds of relief aid by helicopter to the people of Western Samoa as they recovered from the devastation caused by Severe Tropical Cyclone Val and Severe Tropical Cyclone Bebe. She also marked the 50th anniversary of the Battle of the Coral Sea and Adm. Jack Fletcher’s participation when the Australian government invited Fletcher to commemorate the occasion in the first week of May.

Fletcher conducted sea trials and refresher training in the Hawaiian operations area for the first three months of 1992. She got underway on 25 March for PACEX 92-1, serving as the flagship for DesRon 31 with frigate Ouellet (FF-1077) and guided missile frigate Reuben James (FFG-57). Underway for Tonga (25–31 March), the destroyer’s crewmembers were initiated into King Neptune’s Court after crossing the Equator on the 29th. Fletcher made a series of port visits while in the South Pacific, including Nukuʻalofa, Tonga (3–10 April); Nouméa, New Caledonia (14–16 April); and Sydney, Australia (21 April).

At 1010 on 27 January 1994, Fletcher got underway from Pearl Harbor for a WestPac deployment. She spent her first port visit at Majuro Atoll, Republic of the Marshall Islands (3–5 February), before steaming to Kwajalein (7 February). The destroyer also visited Kota Kinabalu, Malaysia (16–17 February), and Phuket, Thailand (21–23 February), before making way for Bahrain on the 23rd. Fletcher participated in maritime interception operations in the North Arabian Gulf (8–12 March), operating out of Bahrain through May. Steaming from the area in early June, she visited Singapore (10 –16 June); Hong Kong (21 –23 June); and Busan (27 –30 June) before making way to Pearl Harbor, arriving on 26 July. On 6 December, Fletcher entered dry dock number four at Pearl Harbor Naval Shipyard for a regular overhaul.

Fletcher turned her prow westward for a scheduled six-month deployment with Hopper (DDG-70) and Paul Hamilton (DDG-60) from Pearl Harbor on 31 August 1998. She made port visits to Hong Kong (15–19 September) and Phuket (24–28 September) before steaming for Bahrain. Arriving at Mina Sulman Pier, Bahrain, on 7 October, the destroyer transited the Strait of Hormuz on the 23rd. She participated in exercise KHUNJAR HAAD with mine countermeasures ship Dextrous (MCM-13) and French, British, and Omani vessels.

Transiting through the Strait of Hormuz on 5 January 1999, Fletcher made way for Diego Garcia, British Indian Ocean Territory, en route to Australia (12–20 January). The destroyer made visits to several cities including Fremantle (20–21 January); Bunbury (21–27 January); Esperance (29–31 January); Melbourne (4–8 February); and Newcastle (10–13 February). Steaming to Nouméa on the 13th, Fletcher got underway for her homeport in Hawaii five days later, ending another successful deployment.

Getting underway from Honolulu with the Abraham Lincoln (CVN-72) BG for her ninth deployment, Fletcher steamed for Incheon, Korea (26 August 2000). The destroyer arrived at Singapore (15–17 September) for a port visit before receiving orders to steam to the Arabian Gulf to conduct maritime interdiction operations in support of NATO sanctions. In a one-month period, Fletcher’s Visit, Board, Search and Seizure (VBSS) crew boarded 30 merchant vessels in the Northern Arabian Gulf (30 September–31 October). She also participated in the multinational exercise ARABIAN SHARK (13 –15 October). After the end of November, the destroyer’s VBSS crew boarded and searched 46 separate merchant vessels.

With her deployment nearing an end, Fletcher steamed from the Arabian Sea en route to Darwin, Australia. After a three day port visit at Darwin (13–15 January 2001), the destroyer made way for Dili, East Timor (17–19 January). She also made port visits at Townsville, Australia (25 –28 January); Brisbane (31 January–3 February); and Pago Pago (11 February) before charting a course for Pearl Harbor, arriving on the 17th for a post-deployment stand down. Fletcher was in port on 11 September when the terrorist attacks against the World Trade Center and Pentagon began. For the first time in her 21-year history, the destroyer set Force Protection Condition Delta in her own homeport. She got underway in December for various drills and training exercises.

Fletcher steamed from Pearl Harbor en route to San Diego to participate in COMPUTEX 2002 (1–12 January 2002).  On 2 August, she deployed for a WestPac, steaming for the Arabian Gulf. The destroyer made port visits to Yokosuka (16–20 August); Hong Kong (23–27 August); Singapore (31 August–5 September); and Bahrain (16–20 September). During the spring of 2003, Fletcher received orders to support Operation IRAQI FREEDOM with BGM-109 Tomahawk Land Attack Missile missions, firing nearly 20 missiles until she returned to her homeport.

Under Operation SEA SWAP, an initiative to increase forward presence by reducing the transit time a vessel steamed between her homeport and an operation area, Fletcher spent more than 17 months in the Fifth Fleet operating area, providing support for Operations IRAQI FREEDOM and ENDURING FREEDOM.

Fletcher was decommissioned at Naval Station San Diego on 1 October 2004.