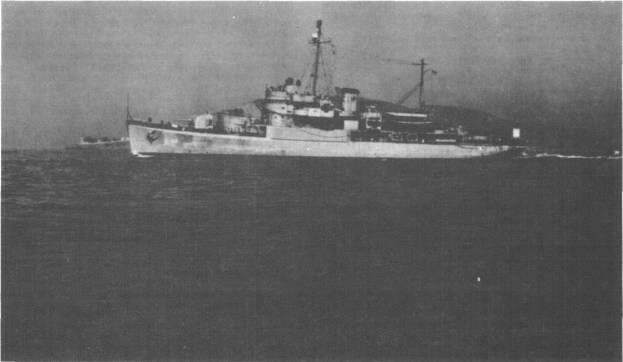 A bay on the coast of Massachusetts.

Duxbury Bay had two more tours of duty in the Far East, from 25 February to 8 September 1947 and from 2 February to 27 July 1948. During the first she operated out of Yokosuka and Okinawa; during the second she tended planes patrolling over Chinese territory during the expansion of Communist control.

Sailing from Long Beach, Calif., 17 March 1949, Duxbury Bay headed west on the first leg of a round-the-world cruise. She spent one month as flagship for Commander, Persian Gulf, a foretaste of her future duty, then sailed on to arrive at Norfolk 3 July. Between 29 October and 21 November she operated as seaplane base at Halifax, Nova Scotia, during cold-weather exercises.

Between 4 January 1950 and 31 December 1960, Duxbury Bay served 10 tours of duty in the Persian Gulf, the Arabian Sea, and the Indian Ocean as flagship for Commander, Middle East Force. Her service was highlighted by a number of important diplomatic missions in this critical area. During her 1951 tour, her crew members served on security patrol and as messengers for the Southeast Asia Treaty Conference at Ceylon at which Commander, Middle East Force, represented the United States Department of Defense. She was visited by Emperor Haile Selassie in February 1953 and transported him to French Somaliland. Homeward bound during her 1954-55 tour, she sailed by way of Mombasa, Kenya; Durban, Union of South Africa; and Rio de Janeiro, Brazil, for good will visits.

Duxbury Bay sailed from Norfolk 3 October 1956 headed for her regular assignment when the Suez Crisis broke out. With the canal blocked, she was stationed on patrol off the eastern end of Crete assisting in the operation of Suda Bay airfield for aircraft of the United Nations Emergency Force. She also carried underwater demolition teams to Saros Bay, Turkey, for survey operations in February 1957 before returning to Norfolk 11 March 1957. During her next cruise, in January 1958 she joined in flood relief at Ceylon.

She paid a special call to Karachi in December 1959 on the occasion of the visit of President D. D. Eisenhower to India and Pakistan.