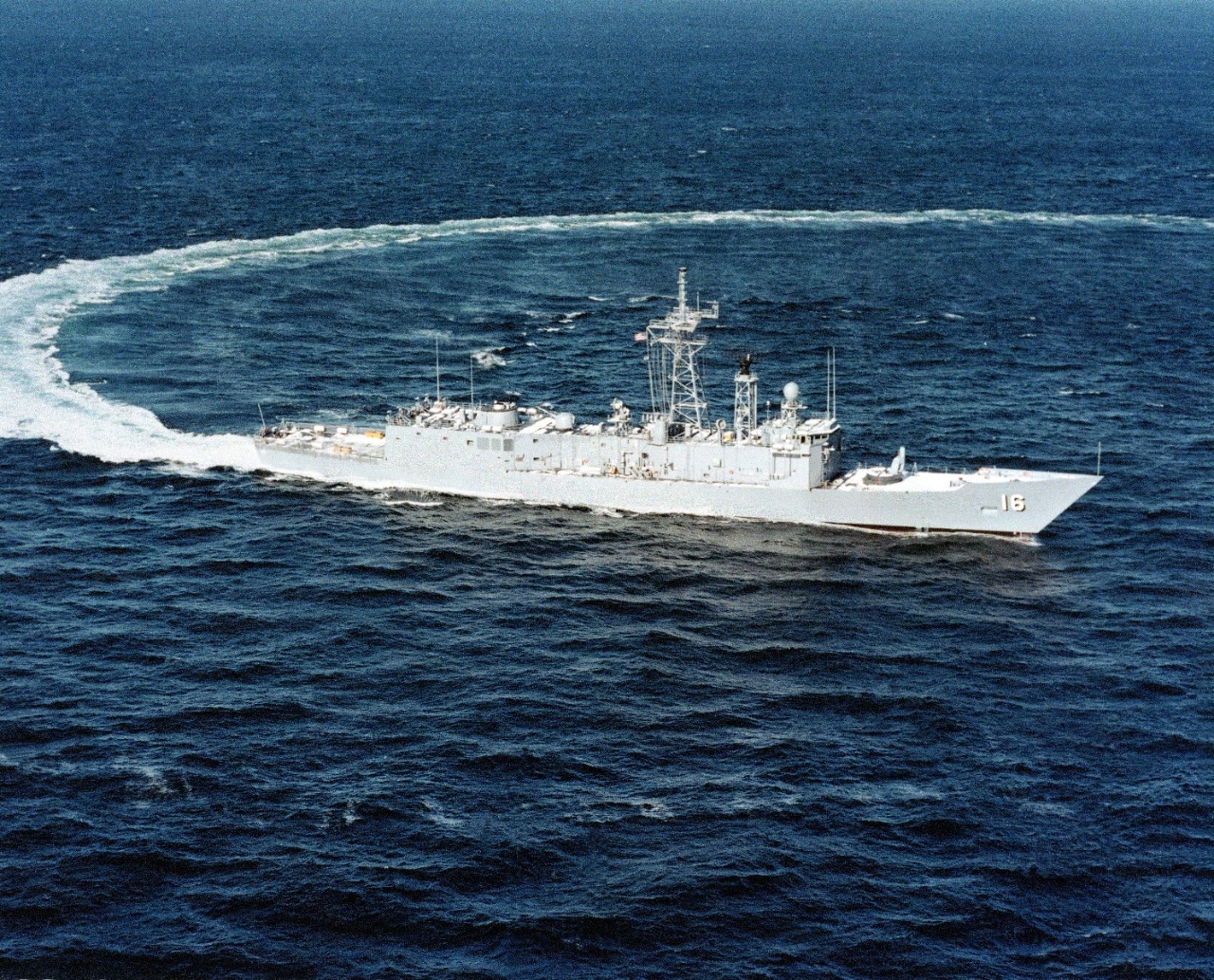 An Oliver Hazard Perry-class guided missile frigate, and the first U.S. naval vessel named for Vice Admiral Clifton Albert Frederick “Ziggy” Sprague, a hero of the Battle off Samar (25 October 1944). Adm. Sprague received the Navy Cross for his “aggressiveness and courage” in leading the famed Task Unit 77.4.3, better known as “Taffy 3” to victory over the larger Japanese Center Force intent on halting the American landings at Leyte.

The guided missile frigate Clifton Sprague was laid down on 30 July 1979, at Bath, Maine, by the Bath Iron Works; launched on 16 February 1980 and sponsored by Courtney Sprague Vaughan, Adm. Sprague’s daughter; and commissioned on 21 March 1981, Cmdr. George M. Musick III in command. 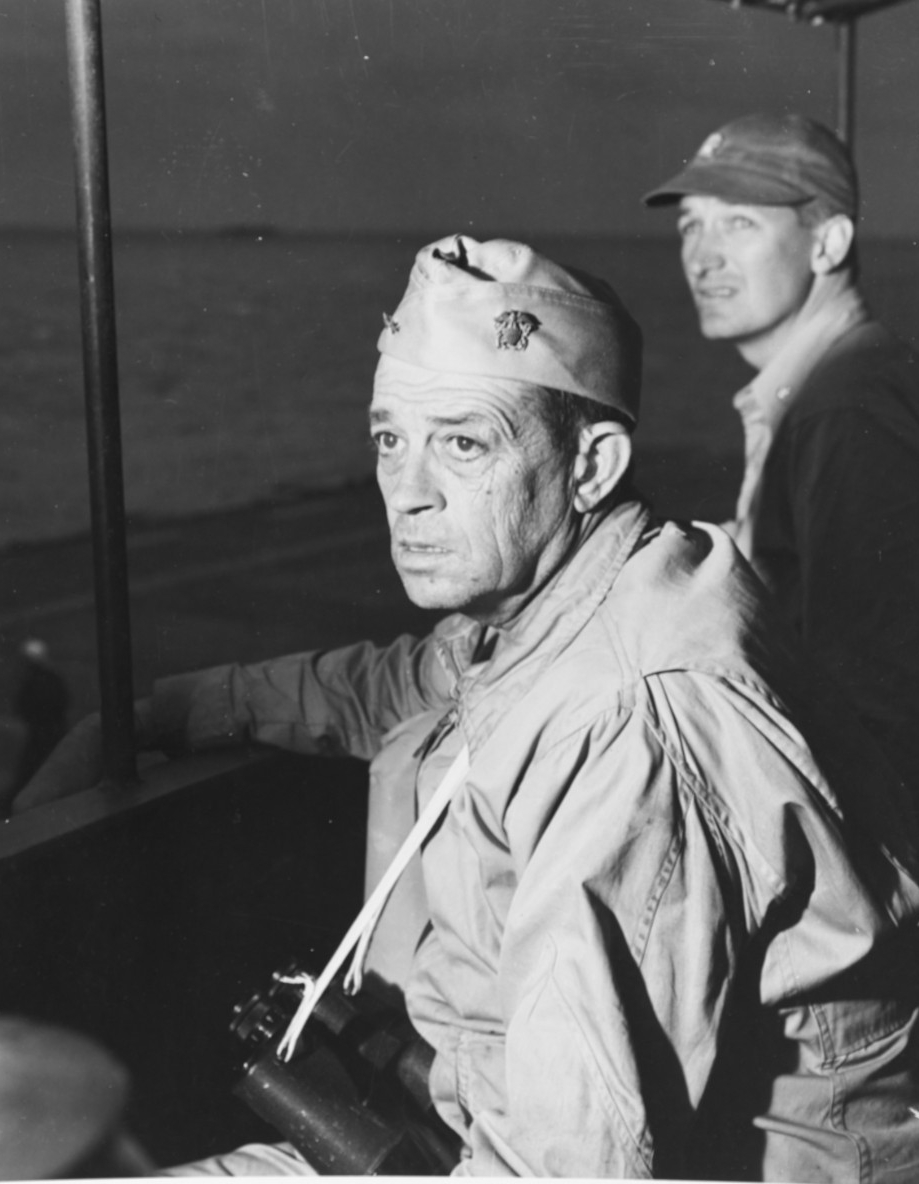 Getting underway on 1 April 1981, Clifton Sprague steamed to her homeport at Mayport, Florida. Stopping in Yorktown, Va., to on-load ammunition, she arrived in Mayport on 13 April before departing for six weeks of training at Guantanamo Bay, Cuba, and off Port Everglades, Fl. The guided missile frigate conducted her first replenishment at sea on 14 May, before returning to her homeport on 6 June. Clifton Sprague became the first guided missile frigate to win the Battle “E” award for the period 1 October 1980-30 September 1981.

Beginning New Year 1982 at Bath Iron Works shipyard, Clifton Sprague underwent her final post-shakedown availability. Departing on 21 January into a raging blizzard, she transited down the Kennebec River before emerging into the North Atlantic to continue her journey back to her homeport at Mayport, arriving on 2 February. In March, after completing antisubmarine warfare training (ASW) operations off Andros Island, Bahamas, Clifton Sprague’s crew and equipment received certification to hunt submarines.

At 0830 on 10 November 1982, Clifton Sprague departed Mayport to begin her first deployment, alongside Sampson (DDG-10). Reaching the eastern Mediterranean on 26 November, she became the first guided missile frigate of her class to transit the Suez Canal. Operating from Bahrain, the frigate began her first assignment on 18 December as part of the Middle East Force.

In April 1983, Clifton Sprague participated in “National Week,” an exercise pitting two carrier battle groups against one another: Nimitz (CVN-68) versus Carl Vinson (CVN-70). As part of the Nimitz group, Clifton Sprague held regular at-sea drills, as well as an underway replenishment with Nimitz and Kalamazoo (AOR-6) on the 18th. Arriving back at Mayport on 20 May, the guided missile frigate soon made way to the Panama Canal on 16 July. She returned to her new homeport of Philadelphia in late September without transiting through the canal. During an underway period into the Caribbean, Clifton Sprague was in Kingstown, St. Vincent, when ordered to assist naval units during the invasion of the small island of Grenada. Arriving on 23 October, she remained on station performing sea-and-rescue (SAR) and coastal patrols until relieved on 19 November.

From 1-17 February 1984, Clifton Sprague participated in READEX 1-84. Steaming for Jacksonville Shipyard Inc., she arrived for a dry dock period from 27 February-16 March. She held refresher training while underway en route to Guantanamo Bay (13 August-4 September), before making way to New York City for Fleet Week on 27-28 September. Clifton Sprague spent the rest of the year in port at Philadelphia.

Clifton Sprague, part of the Orange Team, conducted numerous attacks upon the “enemy” battle group during readiness exercise READEX 1-85 (23-27 March 1985). Commander, Second Fleet (ComSecondFlt) sent her a message stating: “You were a shooting star this READEX.” A month later, on 15 April, the guided missile frigate participated in Exercise Universal Trek-85. After serving as the opposition to an amphibious task force during May’s Operation SOLID SHIELD, she rescued two Belgian sailors whose private sailboat sank in a storm some 20 hours earlier.

While underway on the evening of 17 September 1988, Clifton Sprague suffered a casualty when her number four Ship Service Diesel Generator (SSDG) blew a piston that cracked the casting of the diesel engine, causing lube oil spray on the side of the diesel enclosure. The at sea fire party quickly contained the leak, helping to prevent a serious fire on board. During the same weekend, number two SSDG also suffered a casualty, resulting in the repair of number four SSDG, and the complete replacement of number two.

On 11 February 1989, Clifton Sprague got underway for law enforcement operations off the coast of Florida. On 16 July, she celebrated her first narcotics bust after getting underway from Fort Lauderdale. Law enforcement operations continued until the 19th before returning to Philadelphia. After departing on 11 September for the Caribbean to conduct exercises, the frigate arrived in the wake of Hurricane Hugo. In the early hours of 21 September, she steamed to St. Croix to investigate reports of civil disturbances. Upon completion of these duties, she provided hurricane assessments for the islands of Vieques and Culebra, before assigned to the latter for disaster relief efforts ashore, later receiving a commendation for her humanitarian service there. 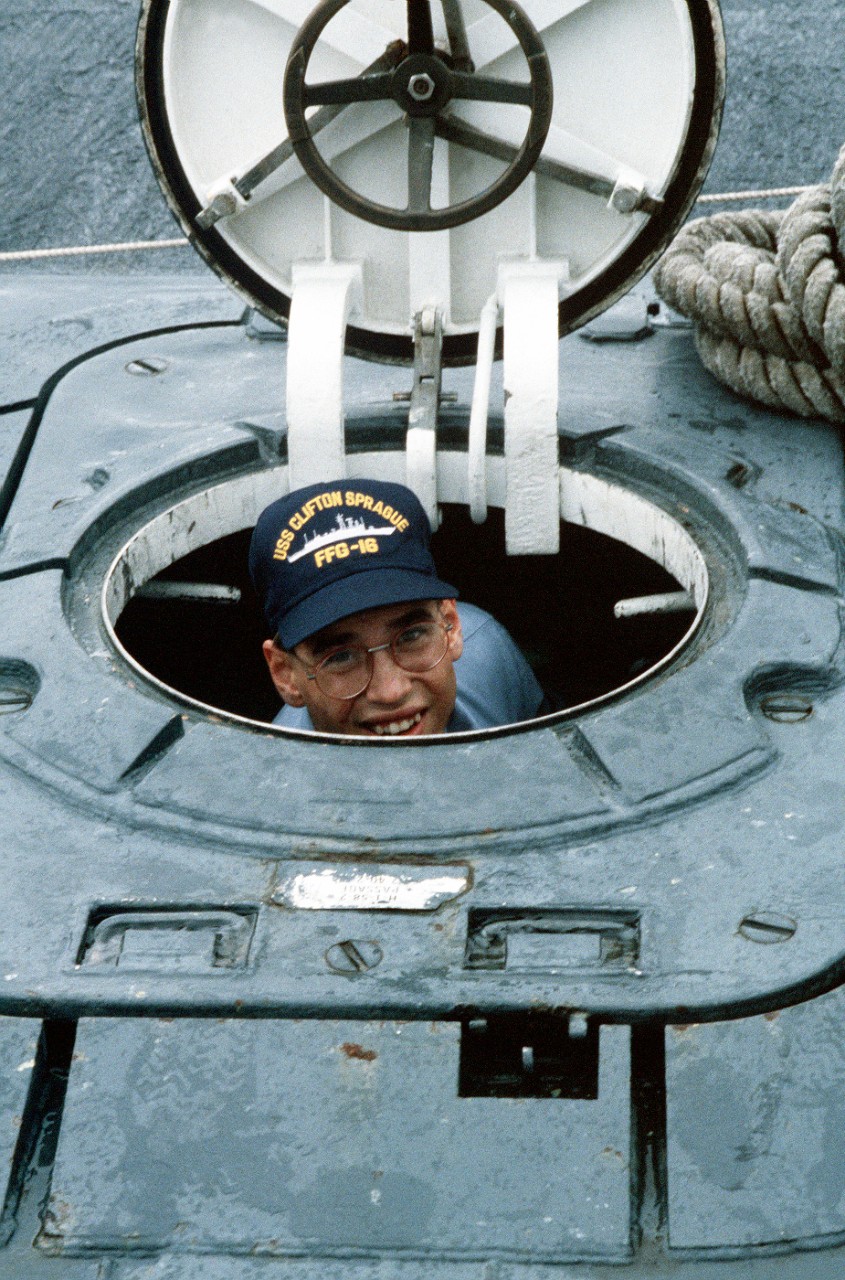 A crew member looks out from a hatch aboard the guided missile frigate Clifton Sprague (FFG 16), June 4, 1990. National Archives identifier: 6456532.

Getting underway to support U.S. Coast Guard law enforcement operations in the Caribbean from 5 July-23 August 1990, Clifton Sprague conducted surveillance, interdiction, and boarding operations. She later participated in Tampa’s Fleet Week (14-22 October). On 26 January 1991, Clifton Sprague embarked members of a Coast Guard law enforcement detachment (LEDET) before transiting the Panama Canal. After a brief counter-narcotics operation in the Pacific, she returned to the Caribbean on 23 February 1991, where she helped the Coast Guard seize a large amount of marijuana and cocaine near the Bahamas.

In March 1992, Clifton Sprague acted as an offshore air search platform, tracking aircraft leaving Mexico headed for south Texas during counter-narcotics operations while steaming in the Caribbean. She relayed any suspicious information to federal authorities. Conducting further operations through April alongside the Coast Guard, she assisted in boarding operations of suspected smugglers. On 1 August, Clifton Sprague shifted her homeport from Philadelphia to Naval Station New York, Staten Island, New York. A short tiger cruise took the crew and their families past the Statue of Liberty and up the Hudson River.

Clifton Sprague joined seven other ships of Destroyer Squadron (DesRon) 6 for a live missile firing exercise on 28 March 1993. She participated in New York City’s Fleet Week, returning to Staten Island where crewmembers gave tours of the ship to hundreds of guests. On 4 July, Clifton Sprague operated alongside Russian cruiser Marshal Ustinov, destroyer Admiral Kharlamov, and replenishment ship Dnester, in a historic US/Russian PASSEX for two days. On the 27th, she departed for a five-week counter-narcotics deployment to the Caribbean. On 19 August, she seized a small pleasure craft loaded with over 2,400 pounds of cocaine headed for the United States.

On 11 January 1994, Clifton Sprague participated in a successful DesRon 6 missile firing exercise. During this exercise, she successfully tracked and engaged three target drones, including one intended for an AEGIS system. She departed Staten Island for the final time on 11 May, making way for Haiti and her new homeport of Mayport. On the 15th, she became the first U.S. Navy ship to respond to the flood of Haitian refugees, participating in Operation SUPPORT DEMOCRACY. Clifton Sprague was also the first Navy ship arriving into the Baie de Port-au-Prince during the United Nations’ occupation of Haiti, and later rescued 507 Haitians on the high seas from unseaworthy craft during Operation ABLE MANNER.

Clifton Sprague was decommissioned on 2 June 1995, and stricken from the Naval Vessel Register on 4 September 1997, after being transferred to Turkey in August 1997 and renamed TCG Gaziantep (F 490). 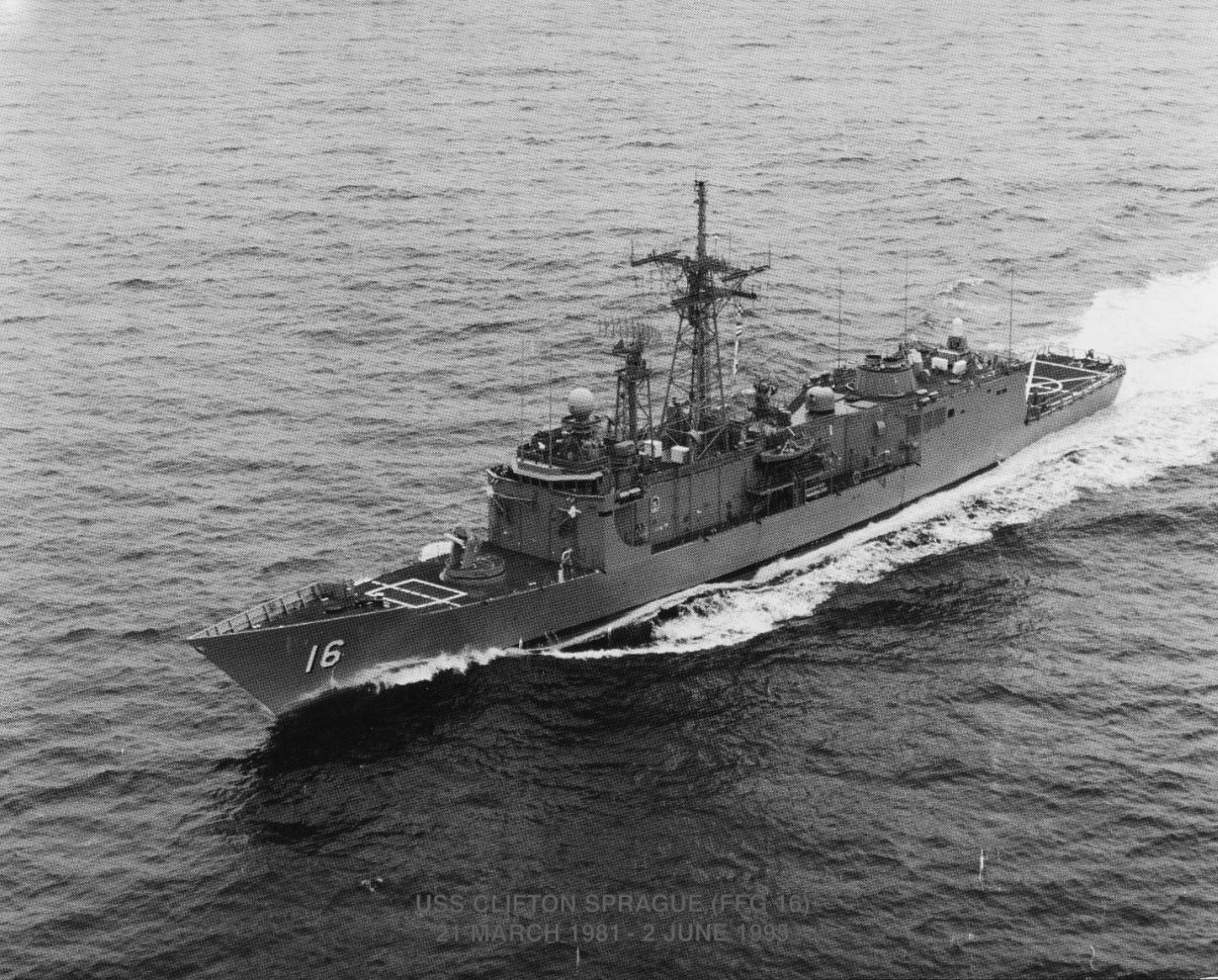 Clifton Sprague (FFG-16) Underway at sea, circa 1981-1995. The original print was received in September 1995. Official U.S. Navy photograph from the collections of the Naval History and Heritage Command. Catalog#: NH 107566-KN.