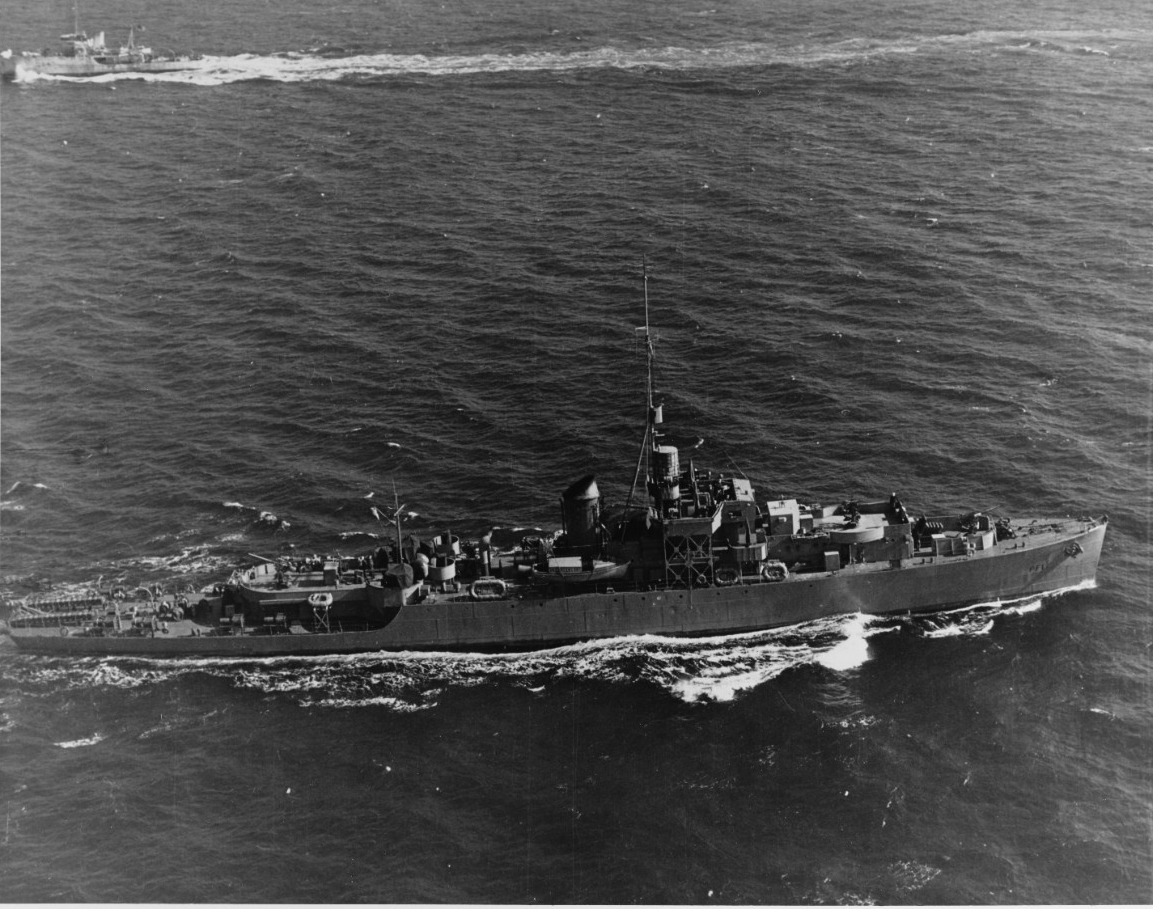 A city in western North Carolina, and the seat of Buncombe County.

She remained in the Saint Lawrence River until 3 January 1943 when she departed Quebec and proceeded to Boston where she completed fitting out. On 23 February, the patrol frigate reported to the Commander, Eastern Sea Frontier, for duty. On 9 March, the warship arrived in New York City, her base of operations. Four days later, Asheville got underway on the first of many round-trip, convoy-escort voyages between New York and Guantanamo Bay, Cuba, which she carried out until she transferred to antisubmarine patrol duty on 2 September. From 17 to 19 September, she escorted a burned-out ammunition ship out to sea from New York and destroyed her. The frigate continued antisubmarine patrols from the autumn of 1943 into the spring of 1944.

In May of 1944, the ship entered the Boston Navy Yard to begin installation of experimental antisubmarine warfare (ASW) gear. Once the new equipment had been installed, Asheville began testing it under the auspices of the Commander, Antisubmarine Development, Atlantic Fleet (COMASDEVLANT). Early in September, she briefly interrupted her test and training schedule to join, a hunter-killer group built around Croatan (CVE-25) to search for a suspected U-boat. However, the American warships did not manage to flush out any enemy submarine; and Asheville resumed her duties with the antisubmarine development group. On the 15th, she moved to Port Everglades, Fla., COMASDEVLANT's new surface ship base. She operated from that port until April 1945 testing a succession of recently invented ASW devices.

On 13 April, the frigate headed for New York and a new assignment-service with the Commander, Eastern Sea Frontier, and a return to antisubmarine patrols. She performed that duty for less than a month because hostilities in Europe ended on 8 May bringing the U-boat scourge to a stop. After that event, Asheville returned to Port Everglades and performed experimental duty until 19 July when she received orders to proceed to the New York Navy Yard for the installation of an experimental radar system. After two months in the yard, she put to sea to test her new equipment at Casco Bay, Maine. She later moved to Norfolk and conducted further experimental work out of that base for the remainder of 1945. On 14 January 1946, Asheville was placed out of commission at Norfolk. Her name was struck from the Navy list on 25 February 1946, and she was sold to the United Boat Service Corp. on 15 June 1946.