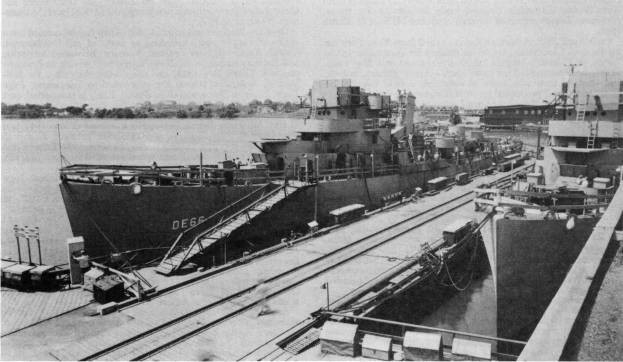 Stanton Morgan Amesbury -- born in Boston, Mass., on 17 January 1916 -- enlisted in the U.S.Naval Reserve as a seaman 2nd class on 12 April 1941. After elimination flight training at Squantum, Mass., Amesbury was appointed aviation cadet, USNR, upon the termination of his enlistment on 11 June. After flight instruction at the naval air stations at Jacksonville and Miami, Fla., he was designated a naval aviator on 1 December 1941.

Commissioned as ensign, USNR, on 27 December 1941 and assigned to the Advanced Carrier Training Group, Atlantic Fleet, based at Norfolk, Va., "Stan" Amesbury was initially assigned to Fighter Squadron (VF) 71, attached to Wasp (CV-7). These orders were cancelled, however; and, instead, Amesbury ferried aircraft with the Atlantic Fleet Air Detachment until 28 April 1942. He was then assigned to VF-9, at East Field, Norfolk.

Lieutenant (j.g.) Amesbury participated in the invasion of North Africa (Operation Torch) flying with VF-9 off Ranger (CV-4). On 9 November 1942, the second day of the landings, flying a Grumman F4F-4 Wildcat, he took off from Ranger at 1455 with flight B-20, to support American ground forces fighting near Port Lyautey. Led by VF-9's "skipper," Lt. Cmdr. John Raby, the nine F4F-4's of the flight split into two sections. Raby took four down to low altitude to scout the road from Rabat to Port Lyautey while the remaining five flew top cover. Raby's section, with Amesbury in the "tail-end charlie" position, spotted fair game on the road between Port Lyautey and Petitjean and dove down to the attack. In the teeth of heavy antiaircraft fire, they strafed a column of trucks and tanks; but after the third or fourth pass, Amesbury's  Wildcat,  9-F-24, was hit by enemy fire, crashed, and exploded. Amesbury was buried at Port Lyautey but, after the war, his remains were returned to the United States and reinterred in the family's plot in Duxbury, Massachusetts.

Upon the completion of her shakedown training at Bermuda and of post-shakedown availability at the Boston Navy Yard, Amesbury proceeded to Norfolk, Va., where, until 13 November 1943, she served as a unit of the destroyer escort (DE) precommissioning training detail, used for the instruction of future DE sailors. One week later, on 20 November, Amesbury commenced operation with Task Force (TF) 69 on transatlantic convoy escort runs and later joined Task Group (TG) 21.9 in similar work. She operated in this capacity through the spring of 1943. During this time, she served as flagship for Commander, Escort Division 19, Cmdr. H. W. Howe, on four round-trip voyages to Londonderry and Lishally, Ireland, and one to Greenock, Scotland. On 10 May 1944, Amesbury's captain "fleeted up" to ComCortDiv 19, relieving Cmdr. Howe, and Lt. Cmdr. Arthur B. Wilber, USNR, assumed command of the ship.

At Londonderry on 1 June 1944, Amesbury reported for duty with TF 124, TG 124.7 and, two days later, sailed to take part in the invasion of Normandy. Arriving in the assault area on 6 June, she took up her assigned area on a screen and fire support station in the "Mason Dixie" grid. During the next week on station, Amesbury took part in several antiaircraft actions against attacking German planes bedevilling the ships offshore.

Between air attacks and drifting mines, the work of the escorts was brisk. At 2112 on 11 June 1944,  the tank landing ship LST-496 struck a mine while proceeding in convoy through a channel to the assault area, and Amesbury hastened to her assistance. Three smaller craft arrived on the scene and were busily picking up survivors before the destroyer escort reached the tank landing ship's side. As soon as the submarine chaser PC-568 cleared LST-496, Lt. Comdr. Wilber skillfully maneuvered Amesbury alongside the stricken amphibious ship and moored her to remove the remainder of the LST's crew and embarked troops, summoning a doctor from the infantry landing craft LCI-530 to treat the injured men taken on board.

Meanwhile, the auxiliary tug ATA-125 arrived on the scene and, with the assistance of Amesbury's sailors on board LST-496, secured a tow line to the crippled ship. However, a short time later, LST-496, barely underway, began to capsize to port. Amesbury promptly cut her lines and maneuvered to clear, the sailors she had put on board the doomed ship to handle the lines being ordered off. Lt. H. J. Riley, USNR, in charge of Amesbury's detail, made certain that all of his men were safely away before he jumped to safety. Ultimately, all of the destroyer escort's sailors were picked up, uninjured, but the ship they had attempted to salvage soon sank.

Amesbury returned to Plymouth, England, the next day, 12 June 1944, and got underway for New York on the 13th. Resuming her duties with CortDiv 19, the ship made one round-trip voyage between New York and Ireland in July.

On 4 August 1944, with the dissolution of CortDiv 19, Amesbury sailed for Panama as relief for Clark (DD-356). Diverted while en route, to Key West, Fla., Amesbury reported to Commander, TG 23.3 for temporary duty. From that time until 20 February 1945, the destroyer escort was assigned to the Fleet Sonar School squadron, operating daily from Key West within the limits of assigned operating areas in the Straits of Florida, in connection with training in antisubmarine warfare (ASW).

Amesbury arrived at the Philadelphia Navy Yard on 23 February 1945, was redesignated APD-46 on that day, and remained there until 16 May 1945 while undergoing conversion to a high speed transport. Amesbury got underway from Norfolk for the west coast and, after proceeding via the Panama Canal, reached San Diego on 17 June. Following a brief visit to Hawaii, the ship returned from Pearl Harbor to the west coast to conduct sonar exercises with the West Coast Sonar School and gunnery and shakedown training with the San Diego Shakedown Group into mid-August, as the war ended in the Pacific.

With the 11 officers and 81 enlisted men of Underwater Demolition Team (UDT) 12 embarked, Amesbury sailed for Okinawa on 16 August 1945. After tarrying briefly at Pearl Harbor and in the western Pacific en route, the ship arrived at Okinawa on 4 September. She sortied the next day as part of Task Unit (TU) 78.1.15 for Jinsen [Inchon] Korea to support the unfolding occupation of that region. Remaining in the area until 15 September, Amesbury acted as screening vessel for the anchorage while UDT-12 conducted beach reconnaissance.

After a quick return to Okinawa, Amesbury proceeded to Tientsin, China, on 25 September 1945, where she supported the landings at that north Chinese port. She departed Chinese waters on 4 October with a group of tank landing ships, bound for Okinawa. En route, she destroyed three mines, a derelict Chinese junk, and successfully rode out a typhoon.

Sailing for Guam on 22 October 1945, Amesbury embarked 37 Marines for passage back home and, in company with Balduck (APD-132), proceeded via Eniwetok and Pearl Harbor, on to the United States arriving at San Diego on 7 November. After embarking Army passengers, Amesbury sailed for the east coast on 7 December and reached Norfolk soon thereafter. After disembarking her passengers and discharging ammunition and other stores, she proceeded to Green Cove Springs, Fla., for lay-up in the Florida Group, 16th Fleet.

Decommissioned and placed in reserve on 3 July 1946, Amesbury never again performed active service. Stricken from the Naval Vessel Register on 1 June 1960, Amesbury was sold to Chet Alexander Marine Salvage of Key West, Fla., on 24 October 1962. She was subsequently scrapped.

Amesbury (DE-66) earned one battle star for her World War II service off the Normandy beachhead.