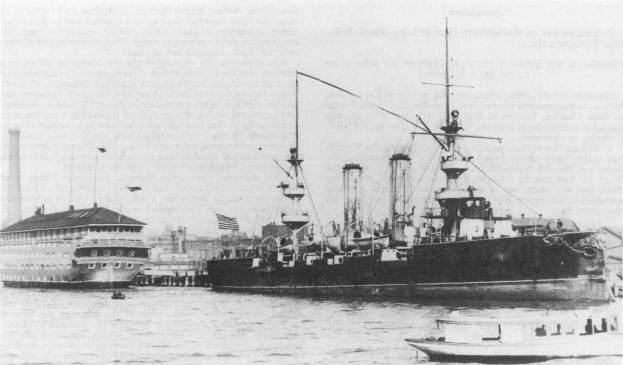 This warship briefly retained the name she carried when built for the Brazilian Navy.

One of the most modern warships of her day, the twin-screw protected cruiser Amazonas, ordered by the Brazilian government and named for that country's largest province, was laid down in 1895 at the Elswick (Newcastle-on-Tyne) yards of the prominent British armaments manufacturing firm, Sir W. G. Armstrong, Whitworth, and Co., Ltd., and was launched on 14 December 1896. The ship was nearing completion in early March, 1898, when rising tensions between the United States and Spain prompted Secretary of the Navy John D. Long to direct naval attaches abroad in Europe to inform the Department, as to the prices at which [naval] vessels could be bought. One of these attaches, Lt. John C. Colwell, in London, promptly completed arrangements on 16 March 1898 to acquire Amazonas and her building sister ship, Almirante Abreu, from the Brazilians. On the 18th, Colwell took delivery of Amazonas at Gravesend, England.

Late that same afternoon, San Francisco (Cruiser No. 5) arrived at Gravesend and found Amazonas already flying the American flag. Lt. Cmdr. Arthur P. Nazro, San Francisco's executive officer, was detached from his ship and reported on board Amazonas to command her for the voyage to the United States. Also transferred were five officers and 87 men drawn from San Francisco's deck and engineering force, as well as an 18-man Marine Guard under the command of 1st Lt. George Barnett, a future commandant of the U.S. Marine Corps.

Over the next nine days, Amazonas prepared for sea, and loaded stores of various kinds, as well as ammunition for her magazines and a consignment of cordite and black gunpowder for the War Department. Underway beneath leaden skies on 27 March 1898, Amazonas stood down the Thames in San Francisco's wake, and set course for the United States. She ultimately arrived off Tompkinsville, Staten Island, via Halifax, Nova Scotia, on 15 April, there delivering the cordite and powder to the Army tug Meigs. That same day, her log records, Amazonas, received official notification that "this vessel is named New Orleans."

Interestingly, she had apparently been assigned that name upon acquisition from the Brazilians, but word of the change, in the days of somewhat less-than-rapid means of communication, did not catch up with her before she left England. Soon after Amazonas's arrival in American waters, the English engineers who had served in the ship during her passage were paid off and disembarked. Over the ensuing days all of the officers and men assigned her from San Francisco returned to their ship, and Amazonas assumed the name that she would carry for the rest of her days, New Orleans (q.v.), on 16 April 1898.