Patrick Henry was the former side-wheel passenger and freight steamer Yorktown which ran between Richmond, Va. and New York. When Virginia seceded from the Union on 17 April 1861, Yorktown, then in the James River, was seized by the commonwealth and subsequently turned over to the Confederate States Navy.

Brigantine-rigged Yorktown was built at New York City by the renowned William H. Webb in 1859 for the New York & Old Dominion Steam Ship Line. The Webb plans of her are still in existence.

49 year-old Cmdr. John Randolph Tucker, CSN, who commanded the newly organized James River Squadron, ordered that Yorktown be converted into a lightly protected man-of-war at the Confederate States Navy Yard at Rocketts Landing in Richmond and rechristened Patrick Henry, in honor of the Virginia Revolutionary War patriot. She was assigned to a position near Mulberry Island in the James to protect the right flank of the Confederate Army of the Peninsula and during the following months remained vigilant against possible attack by Federal vessels from Newport News.

Tucker, who eventually served as an officer in the navies of three nations, was born on 31 January 1812 in Alexandria, Va. He became a US Navy Midshipman on 1 June 1826 and served afloat in the Mediterranean and Brazil Squadrons prior to his promotion to Lt. on 20 December 1837. During the Mexican-American War, he served as a Lt. Cmdr. in the Gulf of Mexico commanding Stromboli until illness forced him to return north. From 1849 until 1855 he was assigned to the Home and Mediterranean Squadron flagships. Tucker received his commission as Cmdr. on 14 September 1855 when he became commanding officer of Pennsylvania. He later served as an ordnance officer at the Norfolk Navy Yard. Cmdr. Tucker resigned from the US Navy when Virginia seceded from the Union and became a Cmdr. in the Virginia Navy and in June the Confederate States Navy. He was commanding officer of Patrick Henry during 1861-62, participating with her in several combat actions.

SIR: It is deemed important that the steamer Patrick Henry, under your command, shall leave James River at the earliest practicable moment and make an active cruise at sea against the enemy.

The Department is unwilling by any instructions to limit your discretion as to the time and manner of running the blockade, your cruising ground, or your return, confiding, as it does, in your good Judgment; but it is evident that your success will be greatly promoted by your escape from the river without the enemy's knowledge.

Should a doubt at any time arise as to the course to be pursued, it may be solved by the consideration that, in accordance with the rules of Christian warfare, you are to inflict upon the enemy the greatest injury in the shortest time.

It is believed that the speed of the Patrick Henry is greater than that of any of the ships of the United States, and that her battery will enable her to engage such vessels as the Harriet Lane and the chartered steamers of the enemy’s Navy generally, thus affording you the means of escaping from his first-class ships and of capturing those of the second-class. The possession of one of the enemy’s cruisers of this class, with her signal book might enable you to capture some of his heavier vessels.

Steam propellers are important to us, as are all ordnance and military stores, and captures of this class you will endeavor to send safely into port.

Should you find it impracticable to leave the river, you will cooperate with the military forces against the enemy, keeping watch by day and night upon his movements, attacking and annoying him to the utmost of your power.

Should circumstances render it important to land your crew to cooperate with the land forces, you will secure your ship under the guns of the Jamestown battery, keeping her ready for instant service.

You will impress upon your officers the importance of establishing and maintaining good discipline, and of inciting every man to do his duty; and you will specially report to the Department the name, place of birth, age, character, and qualifications of every man under your command, whose good conduct, particularly in action, or in moments of peril or excitement may merit your commendation.

You will keep this Department advised of your movements, and you will endeavor to prevent all publications thereof; not authorized by yourself; as tending to defeat your objects.

With my best wishes for yourself and your command, I am, respectfully, your obedient servant,

On 13 September 1861 and again on 2 December, Cmdr. Tucker took Patrick Henry down the river to a point about a mile and a half above Newport News and opened fire on the Federal fleet at long range, hoping to draw out some of the gunboats. The temptation was dismissed by the Union vessels; however Tucker inflicted some minor damage.

During the battle of Hampton Roads, Va., on 8 March 1862 when ironclad Virginia inflicted such damage on the Union fleet, Patrick Henry approached Congress, run aground and flying a white flag, but she herself came under fire from other Federal ships and shore batteries. A shot through her steam chest killed four of her crew. Towed out of action long enough to make repairs, she resumed her former position.

In the engagement between Virginia and Monitor the following day, Patrick Henry fired long range at Monitor maneuvering against Virginia. The Confederate Congress later accorded special thanks to all officers and men for their gallant conduct during the 2-day battle.

After the surrender of Norfolk on 10 May 1862, the James River Squadron retired up the river to Drewry’s Bluff where pursuing Federal ships were repulsed on 15 May. Cmdr. Tucker commanded one of the defending batteries during the operation.

In October 1863 Patrick Henry housed the floating Confederate States Naval Academy at Drewry’s Bluff, where instruction for 52 midshipmen began under the superintendence of Lt. W. H. Parker. She had been designated as an academy ship in May 1862 and had undergone alterations to accommodate the school.

The Confederate Naval Academy is a somewhat inflated appellation for the school ship Patrick Henry which did double duty during the last two years of the Civil War as a training vessel for Confederate midshipmen and a sometime member of the James River Squadron.

The Naval Academy was founded in mid-summer of 1863 in the wake of the dual Confederate setbacks of Gettysburg and Vicksburg and it existed for less than two years. In that time, a total of 180 young men spent time onboard and 40 of them graduated to bear the title of Passed Midshipmen. It may seem bizarre that the manpower-strapped Confederacy established a naval academy, but Secretary Mallory saw the institution as an essential first step in the professionalization of the Confederate Navy and he continued to support it until the last days of the war.

Also in October 1863, Lt. William H. Parker was appointed commanding officer of Patrick Henry as well as the ironclad Richmond that was also a part of the James River Squadron. 37 year-old Parker was born in N.Y. and was serving as a Lt. in the US Navy when war broke out. He resigned his commission and joined the Confederate Navy on 10 June 1861. Parker commanded the gunboat Beaufort during the Battle of Hampton Roads and then spent several months on shore duty before being assigned duties as executive officer of the ironclad Palmetto State.

Subsequently, Lt. Parker became superintendent of the Confederate Naval Academy based on Patrick Henry. Though the primary purpose of the ship was to provide instruction to the approximately 50 midshipmen at a time that lived and studied aboard her, the scant resources of the Confederacy frequently caused the midshipmen to be called away from their studies to participate in active operations against the enemy. These included the capture and destruction of Underwriter on 2 February 1864 and the boarding and capture of Water Witch III on 3 June 1864. After such adventures, it must have seemed anticlimactic to the midshipmen to return to Patrick Henry in order to take exams.

For those midshipmen still onboard when Richmond fell on 2 April 1865, likely the most unforgettable part of their time at the naval school was their role as mounted escorts for the Confederate treasury during the evacuation of the capital and the flight southwest to Danville, Va. Between 40-60 midshipmen accompanied Lt. Parker and the treasure train, while 10 were left behind with Lt. George W. Billups to scuttle and set Patrick Henry afire that evening. She had never left the confines of the James during her active service.

After meeting with President Jefferson Davis and members of his cabinet in Danville on 3 April, Parker was ordered to proceed to the mint at Charlotte, N.C.  Arriving there, via Greensboro on the 11th, the midshipmen learned that the approach of Federal cavalry made it necessary to go farther south. Ultimately, the midshipmen escorted the treasury by train, wagon and on foot as far south as Washington, Ga. There Parker received orders from Secretary Mallory to disband the midshipmen; however he disregarded the orders until he could deposit the treasury in safe hands. Backtracking to Abbeville, S.C., Parker placed the treasury in a “warehouse on the public square” under strong guard until he met with the party of President Davis and turned over his responsibility to the accompanying Confederate cavalry.

On 2 May 1865 Parker issued orders to the midshipmen detaching them from the academy and granting them “leave” to visit their homes. Before turning the young midshipmen away, Parker received authorization to distribute ten days rations apiece and to disperse a total of $1,500 among them, or approximately $40 for each man. Once it was out of the Navy’s hands, the treasury disappeared from the historical record.

During the Civil War’s final days in Virginia, Patrick Henry’s first commander, Commodore John Randolph Tucker served in the defenses of Richmond, Va. and with the Army of Northern Virginia as it retreated west. On 6 April 1865 at the Battle of Sailor’s Creek, amidst the chaos that was unfolding before them, hardened veterans couldn’t help being amused as the old seaman called to his naval battalion “To the starboard march! Grand moral combination!”. He surrendered in the field with his sailors that evening and remained a prisoner of war until 24 July 1865. 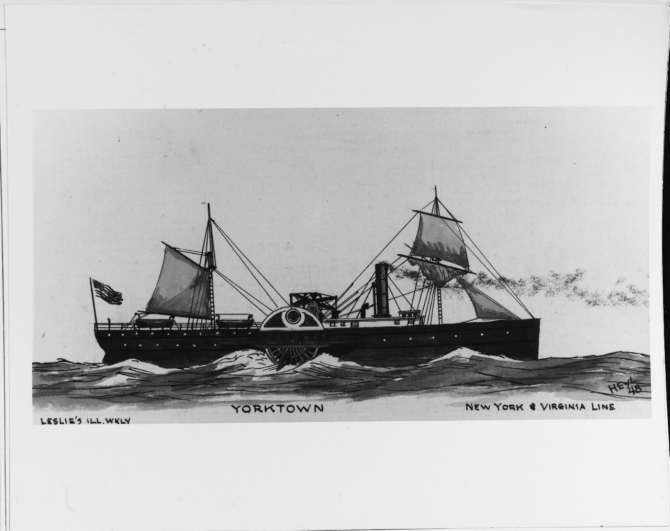 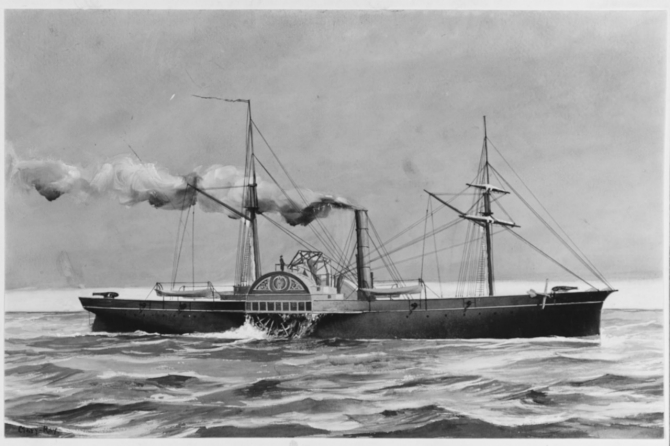 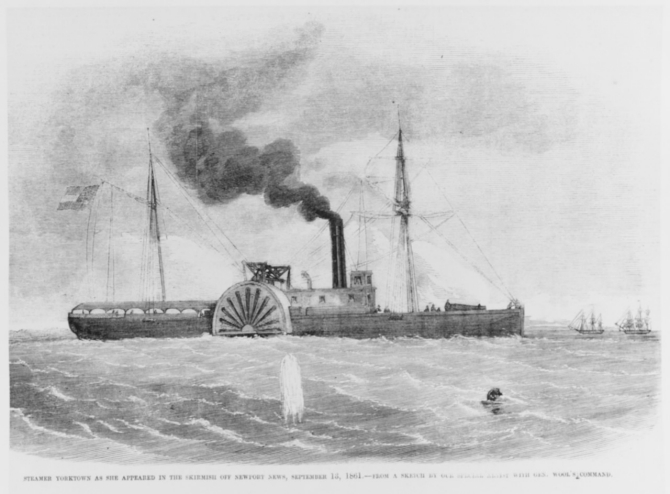 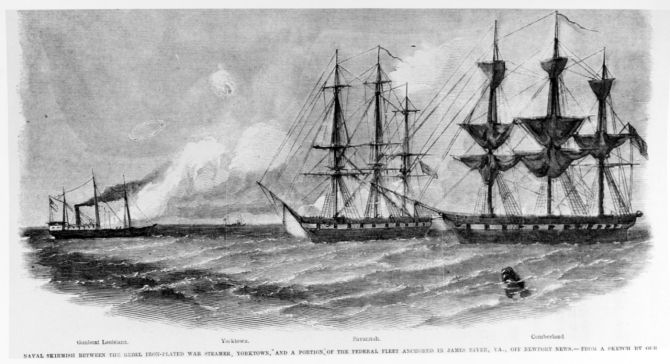