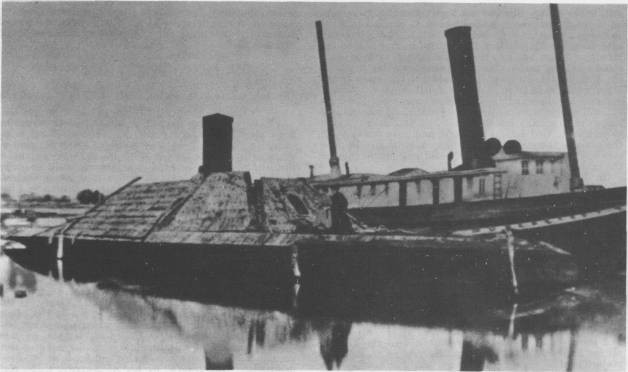 Caption: Ironclad CSS Albemarle after being raised by Federals

Albemarle was built in 1855 at Wheeling, Va. She served the Confederates as a cargo ship and transport off Hatteras Inlet and New Berne, N.C. Albemarle was captured on 15 March 1862 off New Berne by USS Delaware. Federals employed her in the same area but on 5 April, while transporting wounded servicemen, she accidentally ran on the piles in New Berne harbor and sank immediately. Being hopelessly damaged, Albemarle's destruction was ordered by Lt. A. Murray, USN, commanding USS Louisiana.

CSS Albemarle was built in the Roanoke River at Edwards Ferry, N.C., in 1863-64 under supervision of Comdr. J. W. Cooke, CSN, who became her first commanding officer. She was commissioned on 17 April 1864 and 2 days later played the leading role in an attack on the Union forces at Plymouth, N.C., during which Southfield was rammed and sunk, and Miami, Ceres, and Whitehead were forced to withdraw. The following day Plymouth surrendered to the Confederate forces.

On 5 May Albemarle, accompanied by CSS Bombshell, former United States Army transport, attacked a Federal squadron below Plymouth during which Bombshell was captured, but Albemarle received only damage to one gun and several hits on her smokestack which seriously reduced her speed. She was taken up the Roanoke River for repairs; before their completion, however, she was torpedoed and sunk by Lt. W. B. Gushing, USN, whose daring crew of 14 officers and men sailed an improvised torpedo boat in the night exploit of 27-28 October 1864.

Albemarle was raised after the Union forces captured Plymouth. Following the end of hostilities, she was towed to Norfolk Navy Yard by USS Ceres, arrived there on 27 April 1865, was condemned as a prize, and purchased by the Navy who sold her in October 1867.