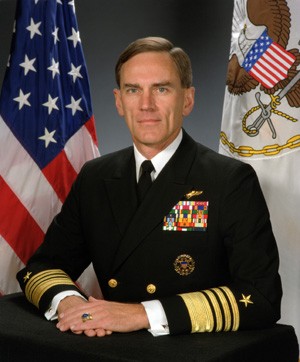 Admiral Johnson oversaw the change in the Navy’s new strategic emphasis on operations in the littorals of the world. He also began programs to improve the material condition of the fleet and the quality of life for Sailors.

Jay Johnson graduated from the U. S. Naval Academy in 1968. Completing flight training the following year, he served two combat tours in Vietnam. He later flew F-14 Tomcat fighters and commanded Fighter Squadron 84. He next commanded Carrier Air Wing One and led its squadrons in a 1986 strike on Libya. In July 1994, Johnson took command of the U.S. Second Fleet. Admiral Johnson became Chief of Naval Operations during a time of increased U.S. commitments to international peacekeeping operations. During his tenure, U.S. naval forces helped compel the withdrawal of Serb forces from Kosovo. With promulgation of the From the Sea and Forward From the Sea naval strategies, he encouraged the Navy to focus on operating in the littorals of the world. To replace worn out equipment, Johnson emphasized development of the next generation of ships, aircraft, and information systems. He improved the Inter-deployment Training Cycle—the period between deployments—by reducing at-sea time, easing wear and tear on equipment and ensuring that Sailors could spend more time in port with their families. He made improvements in other quality of life issues such as pay, health care, and housing.