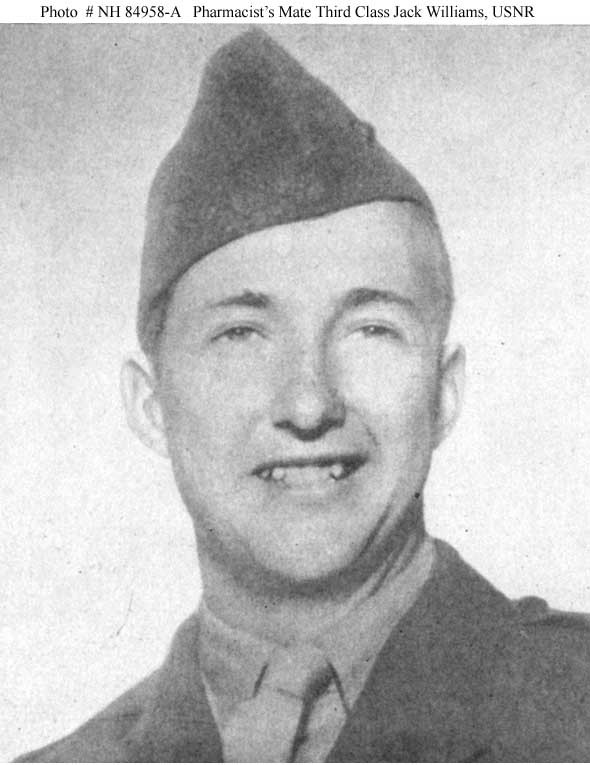 Description: Halftone reproduction of a photograph, copied from the official publication Medal of Honor, 1861-1949, The Navy, page 280. Jack Williams received the Medal of Honor, posthumously, for conspicuous gallantry and intrepidity at the risk of his life on 3 March 1945, during the Battle of Iwo Jima. U.S. Naval History and Heritage Command Photograph.
Related Content

"For conspicuous gallantry and intrepidity at the risk of his life above and beyond the call of duty while serving with the Third Battalion, Twenty-eighth Marines, FIFTH Marine Division, during the occupation of Iwo Jima, Volcano Islands, 3 March 1945. Gallantly going forward of the front lines under intense enemy small-arms fire to assist a Marine wounded in a fierce grenade battle, WILLIAMS dragged the man to a shallow depression and was kneeling, using his own body as a screen from the sustained fire as he administered first aid, when struck in the abdomen and groin three times by hostile rifle fire. Momentarily stunned, he quickly recovered and completed his ministration before applying battle dressing to his own multiple wounds. Unmindful of his own urgent need for medical attention, he remained in the perilous fire-swept area to care for another Marine casualty. Heroically completing his task despite pain and profuse bleeding, he then endeavored to make his way to the rear in search of adequate aid for himself when struck down by a Japanese sniper bullet which caused his collapse. Succumbing later as a result of his self-sacrificing service to others, WILLIAMS, by his courageous determination, unwavering fortitude and valiant performance of duty, served as an inspiring example of heroism, in keeping with the highest traditions of the United States Naval Service. He gallantly gave his life for his country."