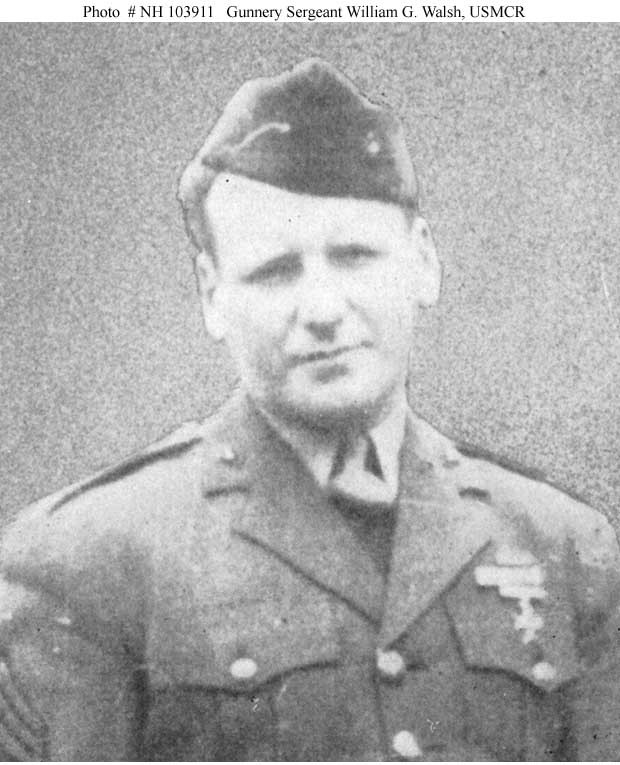 Description: Halftone reproduction of a photograph, copied from the official publication Medal of Honor, 1861-1949, The Navy, page 276. William G. Walsh received the Medal of Honor, posthumously, for extraordinary gallantry and intrepidity at the risk of his life above and beyond the call of duty on 27 February 1945, during the Battle of Iwo Jima. U.S. Naval History and Heritage Command Photograph.
Related Content

Medal of Honor citation of Gunnery Sergeant William G. Walsh, USMCR (as printed in the official publication "Medal of Honor, 1861-1949, The Navy", page 276):

"For extraordinary gallantry and intrepidity at the risk of his life above and beyond the call of duty as Leader of an Assault Platoon, attached to Company G, Third Battalion, Twenty-seventh Marines, FIFTH Marine Division, in action against enemy Japanese forces at Iwo Jima, Volcano Islands, on 27 February 1945. With the advance of his company toward Hill 362 disrupted by vicious machine-gun fire from a forward position which guarded the approaches to this key enemy stronghold, Gunnery Sergeant Walsh fearlessly charged at the head of his platoon against the Japanese entrenched on the ridge above him, utterly oblivious to the unrelenting fury of hostile automatic weapons fire and hand grenades employed with fanatic desperation to smash his daring assault. Thrown back by the enemy's savage resistence, he once again led his men in a seemingly impossible attack up the steep, rocky slope, boldly defiant of the annihilating streams of bullets which saturated the area. Despite his own casualty losses and the overwhelming advantage held by the Japanese in superior numbers and dominant position, he gained the ridge's top only to be subjected to an intense barrage of hand grenades thrown by the remaining Japanese staging a suicidal last stand on the reverse slope. When one of the grenades fell in the midst of his surviving men, huddled together in a small trench, Gunnery Sergeant Walsh, in a final valiant act of complete self-sacrifice, instantly threw himself upon the deadly bomb, absorbing with his own body the full and terrific force of the explosion. Through his extraordinary initiative and inspiring valor in the face of almost certain death, he saved his comrades from injury and possible loss of life and enabled his company to seize and hold this vital enemy position. He gallantly gave his life for his country."