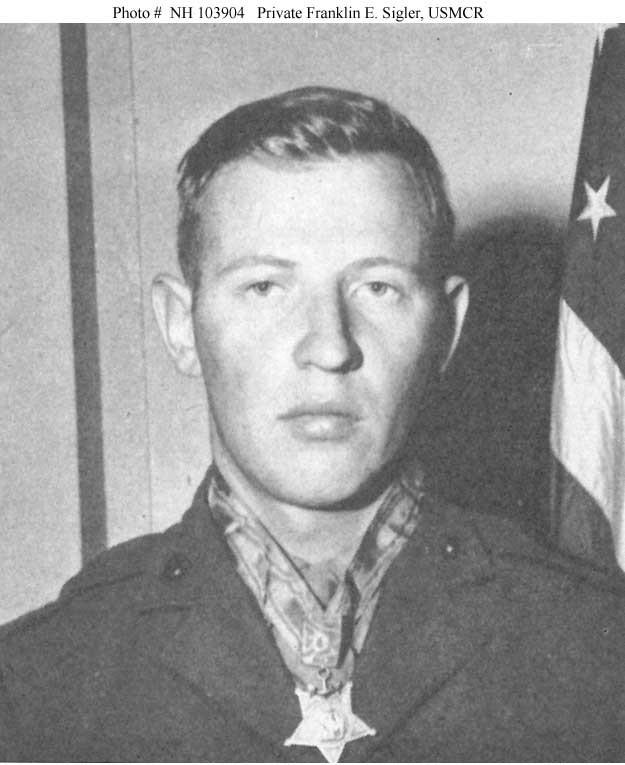 Description: Halftone reproduction of a photograph, copied from the official publication Medal of Honor, 1861-1949, The Navy, page 260. Franklin E. Sigler received the Medal of Honor for conspicuous gallantry and intrepidity at the risk of his life on 14 March 1945, during the Battle of Iwo Jima. U.S. Naval History and Heritage Command Photograph.
Related Content

Medal of Honor citation of Private Franklin Earl Sigler, USMCR (as printed in the official publication "Medal of Honor, 1861-1949, The Navy", page 260):

"For conspicuous gallantry and intrepidity at the risk of his life above and beyond the call of duty while serving with the Second Battalion, Twenty-Sixth Marines, FIFTH Marine Division, in action against enemy Japanese forces during the seizure of Iwo Jima in the Volcano Islands on 14 March 1945. Voluntarily taking command of his rifle squad when the leader became a casualty, Private Sigler fearlessly led a bold charge against an enemy gun installation which had held up the advance of his company for several days and, reaching the position in advance of others, assailed the emplacement with hand grenades and personally annihilated the entire crew. As additional Japanese troops opened fire from concealed tunnels and caves above, he quickly scaled the rocks leading to the attacking guns, surprised the enemy with a furious one-man assault and, although severely wounded in the encounter, deliberately crawled back to his squad position where he steadfastly refused evacuation, persistently directing heavy machine-gun and rocket barrages on the Japanese cave entrances. Undaunted by the merciless rain of hostile fire during the intensified action, he gallantly disregarded his own painful wounds to aid casualties, carrying three wounded squad members to safety behind the lines and returning to continue the battle with renewed determination until ordered to retire for medical treatment. Stout-hearted and indomitable in the face of extreme peril, Private Sigler, by his alert initiative, unfaltering leadership and daring tactics in a critical situation, effected the release of his besieged company from enemy fire and contributed essentially to its further advance against a savagely fighting enemy. His superb valor, resolute fortitude and heroic spirit of self-sacrifice throughout reflected the highest credit upon Private Sigler and the United States Naval Service."