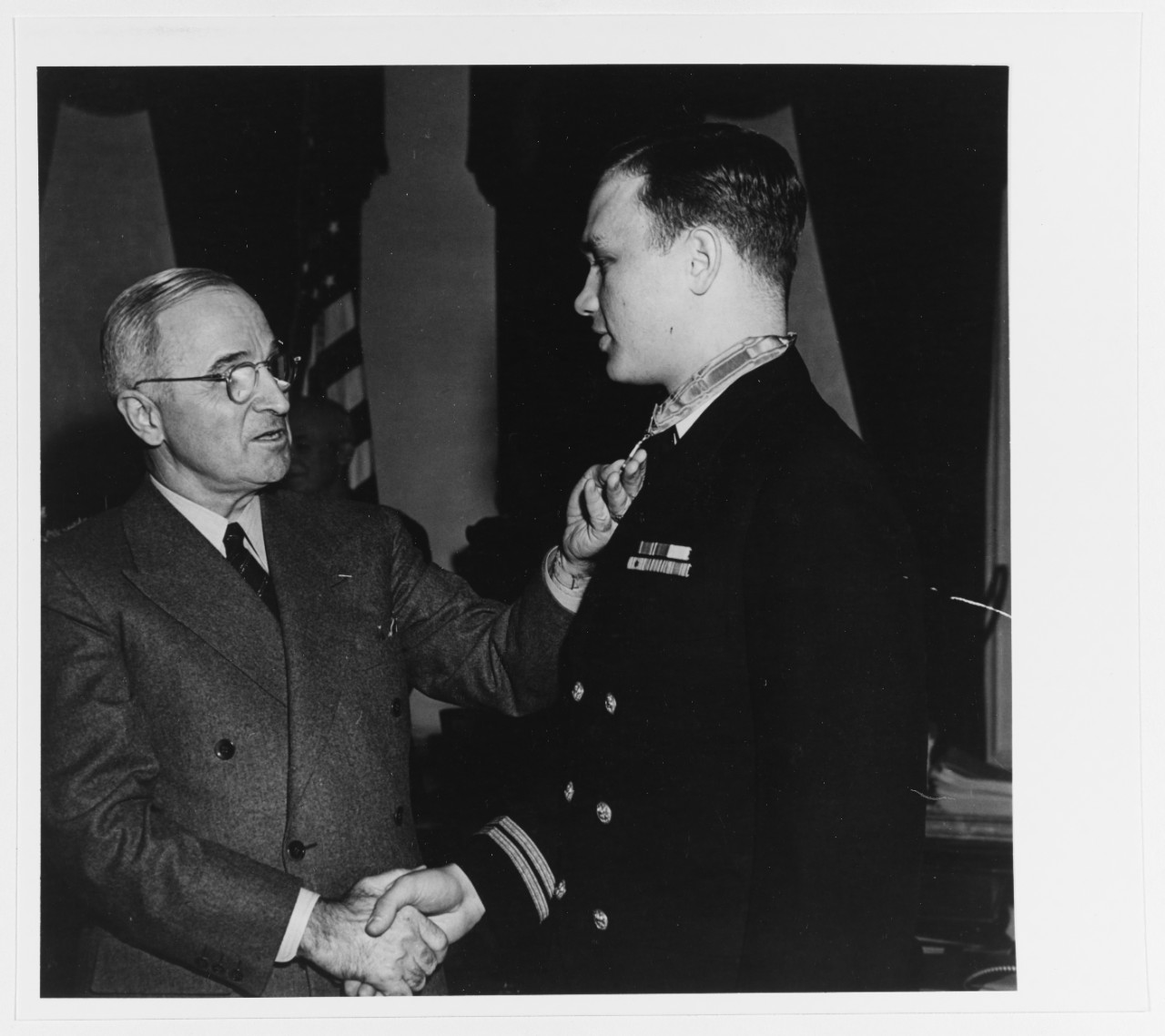 Description: Is presented with the Medal of Honor by President Harry S. Truman at the White House, Washington, D.C. on 18 December 1945. The medal was awarded for conspicuous gallantry and intrepidity while he was Commanding Officer of USS LCS 122 off Okinawa, Japan in June 1945. Official U.S. Navy Photograph, now in the collections of the National Archives.
Related Content

Medal of Honor citation of Lieutenant Richard Miles McCool, Jr., USN (as printed in the official publication "Medal of Honor, 1861-1949, The Navy", page 227):

"For conspicuous gallantry and intrepidity at the risk of his life above and beyond the call of duty as Commanding Officer of the U.S.S. LCS 122, during operations against enemy Japanese forces in the Ryukyu Chain, 10 and 11 June 1945. Sharply vigilant during hostile air raids against Allied ships on radar picket duty off Okinawa on 10 June, Lieutenant McCool aided materially in evacuating all survivors from a sinking destroyer which had sustained mortal damage under the devastating attacks. When his own craft was attacked simultaneously by two of the enemy's suicide squadron early in the evening of 11 June, he instantly hurled the full power of his gun batteries against the plunging aircraft, shooting down the first and damaging the second before it crashed his station in the conning tower and engulfed the immediate area in a mass of flames. Although suffering from shrapnel wounds and painful burns, he rallied his concussion-shocked crew and initiated vigorous fire-fighting measures and then proceeded to the rescue of several trapped in a blazing compartment, subsequently carrying one man to safety despite the excruciating pain of additional severe burns. Unmindful of all personal danger, he continued his efforts without respite until aid arrived from other ships and he was evacuated. By his staunch leadership, capable direction and indomitable determination throughout the crisis, Lieutenant McCool saved the lives of many who otherwise might have perished and contributed materially to the saving of his ship for further combat service. His valiant spirit of self-sacrifice in the face of extreme peril sustains and enhances the highest traditions of the United States Naval Service."