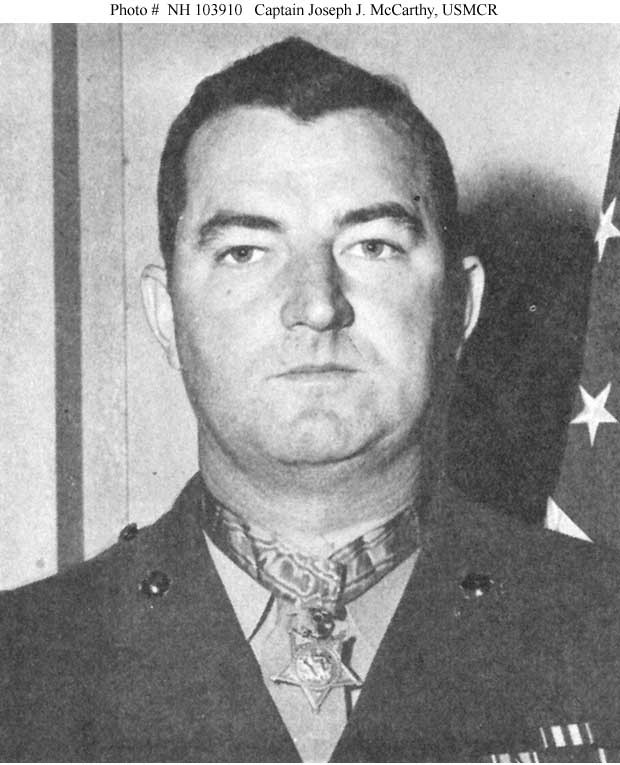 Description: Halftone reproduction of a photograph, copied from the official publication Medal of Honor, 1861-1949, The Navy, page 226. Joseph J. McCarthy received the Medal of Honor for conspicuous gallantry and intrepidity at the risk of his life on 21 February 1945, during the Battle of Iwo Jima. U.S. Naval History and Heritage Command Photograph.
Related Content

Medal of Honor citation of Captain John Jeremiah McCarthy, USMCR (as printed in the official publication "Medal of Honor, 1861-1949, The Navy", page 226):

"For conspicuous gallantry and intrepidity at the risk of his life above and beyond the call of duty as Commanding Officer of a Rifle Company attached to the Second Battalion, Twenty-fourth Marines, FOURTH Marine Division, in action against enemy Japanese forces during the seizure of Iwo Jima, Volcano Islands, on 21 February 1945. Determined to break through the enemy's cross-island defenses, Captain McCarthy acted on his own initiative when his company advance was held up by uninterrupted Japanese rifle, machine-gun and high velocity 47-mm. fire during the approach to Motoyama Airfield No.8. Quickly organizing a demolitions and flame-thrower team to accompany his hand picked rifle squad, he fearlessly led the way across 75 years of fire-swept ground, charged a heavily fortified pillbox on the ridge of the front and, personally hurling hand grenades into the emplacement as he directed the combined operations of his small assault group, completely destroyed the hostile installation. Spotting two Japanese soldiers attempting to escape from the shattered pillbox, he boldly stood upright in full view of the enemy and dispatched both troops before advancing to a second emplacement under greatly intensified fire and then blasted the strong fortifications with a well-planned demolitions attack. Subsequently entering the ruins, he found a Japanese taking aim at one of our men and, with alert presence of mind, jumped the enemy, disarmed and shot him with his own weapon. Then, intent on smashing through the narrow breach, he rallied the remainder of his company and pressed a full attack with furious aggressiveness until he had neutralized all resistence and captured the ridge. An inspiring leader and indomitable fighter, Captain McCarthy consistently disregarded all personal danger during the fierce conflict and, by his brilliant professional skill, daring tactics, and tenacious perserverance in the face of overwhelming odds, contributed materially to the success of his division's operations against this savagely defended outpost of the Japanese Empire. His cool decision and outstanding valor reflect the highest credit upon Captain McCarthy and enhance the finest traditions of the United States Naval Service."