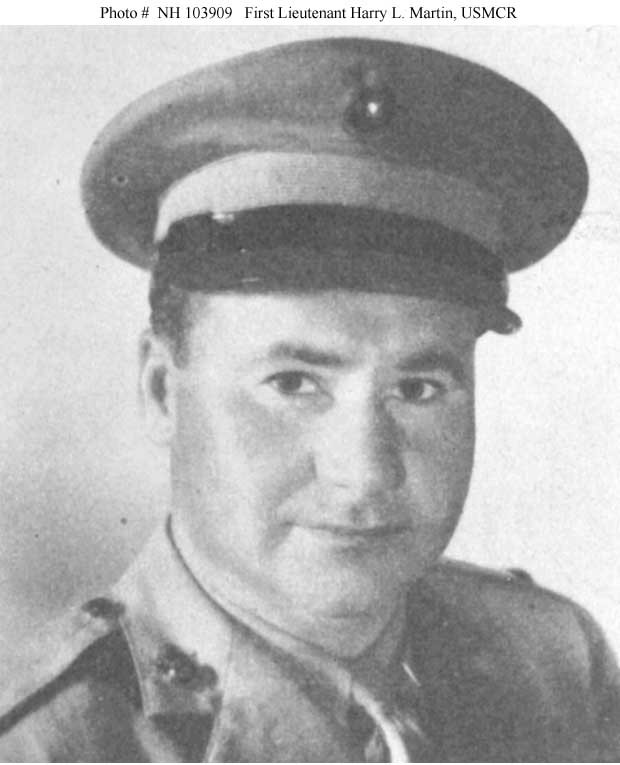 Description: Halftone reproduction of a photograph, copied from the official publication Medal of Honor, 1861-1949, The Navy, page 221. Harry L. Martin received the Medal of Honor, posthumously, for conspicuous gallantry and intrepidity at the risk of his life on 26 February 1945, during the Battle of Iwo Jima. U.S. Naval History and Heritage Command Photograph.
Related Content

Medal of Honor citation of First Lieutenant Harry Linn Martin, USMCR (as printed in the official publication "Medal of Honor, 1861-1949, The Navy", page 221):

"For conspicuous gallantry and intrepidity at the risk of his life above and beyond the call of duty as Platoon Leader attached to Company C, Fifth Pioneer Battalion, FIFTH Marine Division, in action against enemy Japanese forces on Iwo Jima, Volcano Islands, 26 March 1945. With his sector of the Fifth Pioneer Battalion bivouac area penetrated by a concentrated enemy attack launched a few minutes before dawn, First Lieutenant Martin instantly organized a firing line with the Marines nearest his foxhole and succeeded in checking momentarily the headlong rush of the Japanese. Determined to rescue several of his men trapped in positions overrun by the enemy, he defied intense hostile fire to work his way through the Japanese to the surrounded Marines. Although sustaining two severe wounds, he blasted the Japanese who attempted to intercept him, located his beleaguered men and directed them to their own lines. When four of the infiltrating enemy took possession of an abandoned machine-gun pit and subjected his sector to a barrage of hand grenades, First Lieutenant Martin, alone and armed only with a pistol, boldly charged the hostile position and killed all of its occupants. Realizing that his few remaining comrades could not repulse another organized attack, he called to his men to follow and then charged into the midst of the strong enemy force, firing his weapon and scattering them until he fell, mortally wounded by a grenade. By his outstanding valor, indomitable fighting spirit and tenacious determination in the face of overwhelming odds, First Lieutenant Martin permanently disrupted a coordinated Japanese attack and prevented a greater loss of life in his own and adjacent platoons. His inspiring leadership and unswerving devotion to duty reflect the highest credit upon himself and the United States Naval Service. He gallantly gave his life for his country."