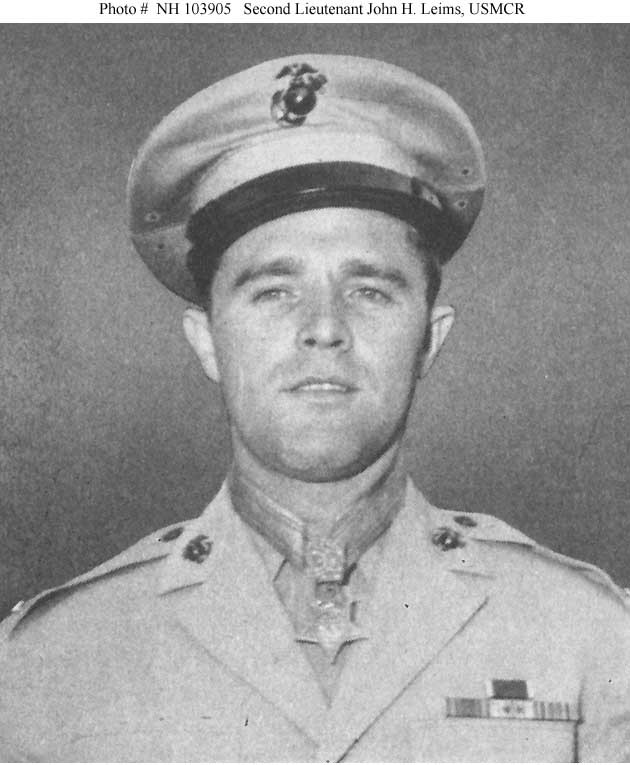 Description: Halftone reproduction of a photograph, copied from the official publication Medal of Honor, 1861-1949, The Navy, page 217. John H. Leims received the Medal of Honor for conspicuous gallantry and intrepidity at the risk of his life on 7 March 1945, during the Battle of Iwo Jima. U.S. Naval History and Heritage Command Photograph.
Related Content

Medal of Honor citation of Second Lieutenant John Harold Leims, USMCR (as printed in the official publication "Medal of Honor, 1861-1949, The Navy", page 217):

"For conspicuous gallantry and intrepidity at the risk of his life above and beyond the call of duty as Commanding Officer of Company B, First Battalion, Ninth Marines, THIRD Marine Division, in action against enemy Japanese forces on Iwo Jima in the Volcano Islands, 7 March 1945. Launching a surprise attack against the rock-imbedded fortifications of a dominating Japanese hill position, Second Lieutenant Leims spurred his company forward with indomitable determination and, skillfully directing his assault platoons against the cave-emplaced enemy troops and heavily fortified pillboxes, succeeded in capturing the objective in the late afternoon. When it became apparent that his assault platoons were cut off in this newly won position, approximately 400 yards forward of the adjacent units and lacked all communication with the command post, he personally advanced and laid telephone lines across the isolating expanse of open, fire-swept terrain. Ordered to withdraw his command after he had joined his forward platoons, he immediately complied, adriotly effecting the withdrawal of his troops without incident. Upon arriving at the rear, he was informed that several casualties had been left at the abandoned ridge position beyond the front lines. Although suffering acutely from the strain and exhaustion of battle, he instantly went forward despite darkness and the slashing fury of hostile machine-gun fire, located and carried to safety one seriously wounded Marine and then, running the gantlet of enemy fire for the third time that night, again made his tortuous way into the bullet- ridden death trap and rescued another of his wounded men. A dauntless leader, concerned at all times for the welfare of his men, Second Lieutenant Leims soundly maintained the coordinated strength of his battle-wearied company under extremely difficult conditions and, by his bold tactics, sustained aggressiveness and heroic disregard of all personal danger, contributed essentially to the success of his division's operations against this vital Japanese base. His valiant conduct in the face of fanatic opposition sustains and enhances the highest traditions of the United States Naval Service."