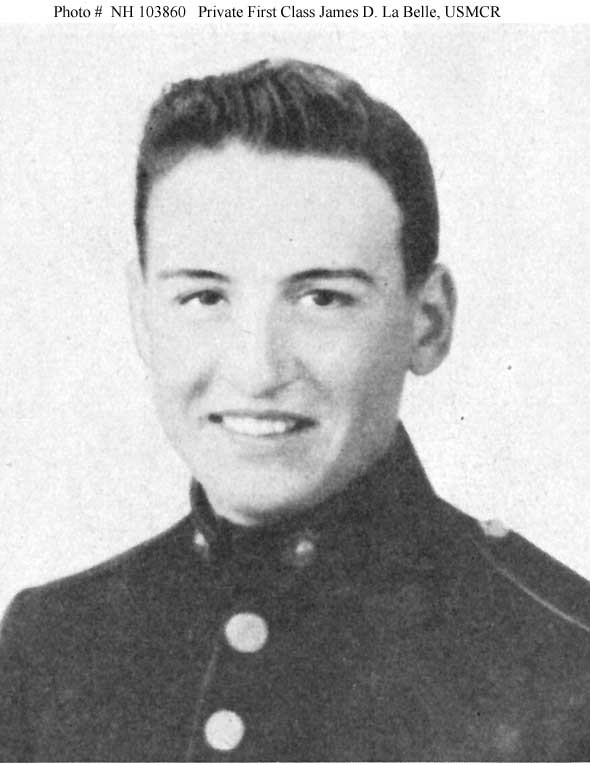 Description: Halftone reproduction of a photograph, copied from the official publication Medal of Honor, 1861-1949, The Navy, page 216. James D. La Belle received the Medal of Honor, posthumously, for conspicuous gallantry and intrepidity at the risk of his own life on 8 March 1945, during the Battle of Iwo Jima. U.S. Naval History and Heritage Command Photograph.
Related Content

"For conspicuous gallantry and intrepidity at the risk of his life above and beyond the call of duty while attached to the Twenty-seventh Marines, FIFTH Marine Division, in action against enemy Japanese forces during the seizure of Iwo Jima in the Volcano Islands, 8 March 1945. Filling a gap in the front lines during a critical phase of the battle, Private First Class La-Belle had dug into a foxhole with two other Marines and, grimly aware of the enemy's presistent attempts to blast a way through our lines with hand grenades, applied himself with steady concentration to maintaining a sharply vigilant watch during the hazardous night hours. Suddenly a hostile grenade landed beyond reach in his foxhole. Quickly estimating the situation, he determined to save the others if possible, shouted a warning, and instantly dived on the deadly missile, absorbing the exploding charge in his own body and thereby protecting his comrades from serious injury. Stout-hearted and indomitable, he had unhesitatingly relinquished his own chance of survival that his fellow Marines might carry on the relentless fight against a fanatic enemy. His dauntless courage, cool decision and valiant spirit of self-sacrifice in the face of certain death reflect the highest credit upon Private First Class LaBelle and upon the United States Naval Service. He gallantly gave his life in the service of his country."