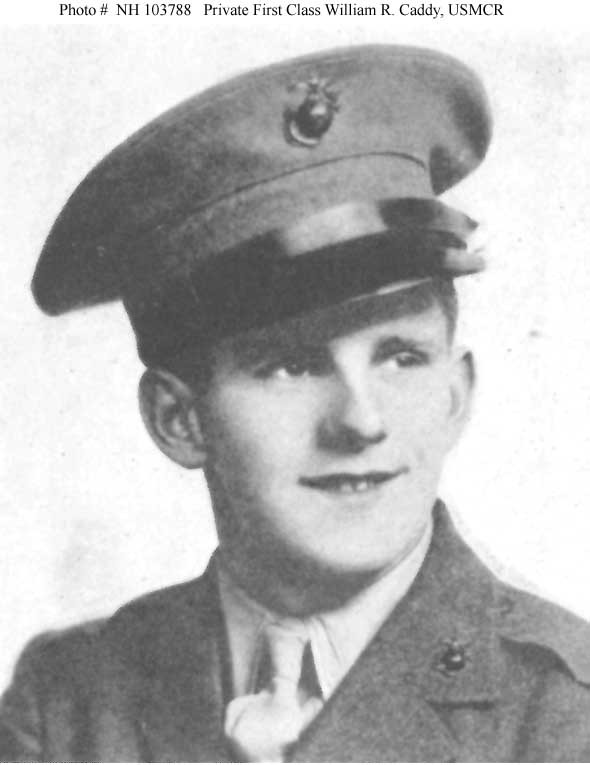 Description: Halftone reproduction of a photograph, copied from the official publication Medal of Honor, 1861-1949, The Navy, page 165. William R. Caddy received the Medal of Honor, posthumously, for conspicuous gallantry and intrepidity on 3 March 1945, during the Battle of Iwo Jima, when he sacrificed his own life by diving on a grenade to protect other men of his platoon. U.S. Naval History and Heritage Command Photograph.
Related Content

"For conspicuous gallantry and intrepidity at the risk of his life above and beyond the call of duty while serving as a Rifleman with Company I, Third Battalion, Twenty-sixth Marines, FIFTH Marine Division, in action against enemy Japanese forces during the seizure of Iwo Jima in the Volcano Islands, 3 March 1945. Consistently aggressive, Private First Class Caddy boldly defied shattering Japanese machine-gun and small-arms fire to move forward with his platoon leader and another Marine during the determined advance of his company through an isolated sector and, gaining the comparative safety of a shell hole, took temporary cover with his comrades. Immediately pinned down by deadly sniper fire from a well-concealed position, he made several unsuccessful attempts to again move forward and then, joined by his platoon leader, engaged the enemy in a fierce exchange of hand grenades until a Japanese grenade fell beyond reach in a shell hole. Fearlessly disregarding all personal danger, Private First Class Caddy instantly dived on the deadly misile, absorbing the exploding charge in his own body and protecting the others from serious injury. Stout-hearted and indomitable, he unhesitatingly yielded his own life that his fellow Marines might carry on the relentless battle against a fanatic enemy. His dauntless courage and valiant spirit of self-sacrifice in the face of certain death reflect the highest credit upon Private First Class Caddy and upon the United States Naval Service. He gallantly gave his life for his comrades."