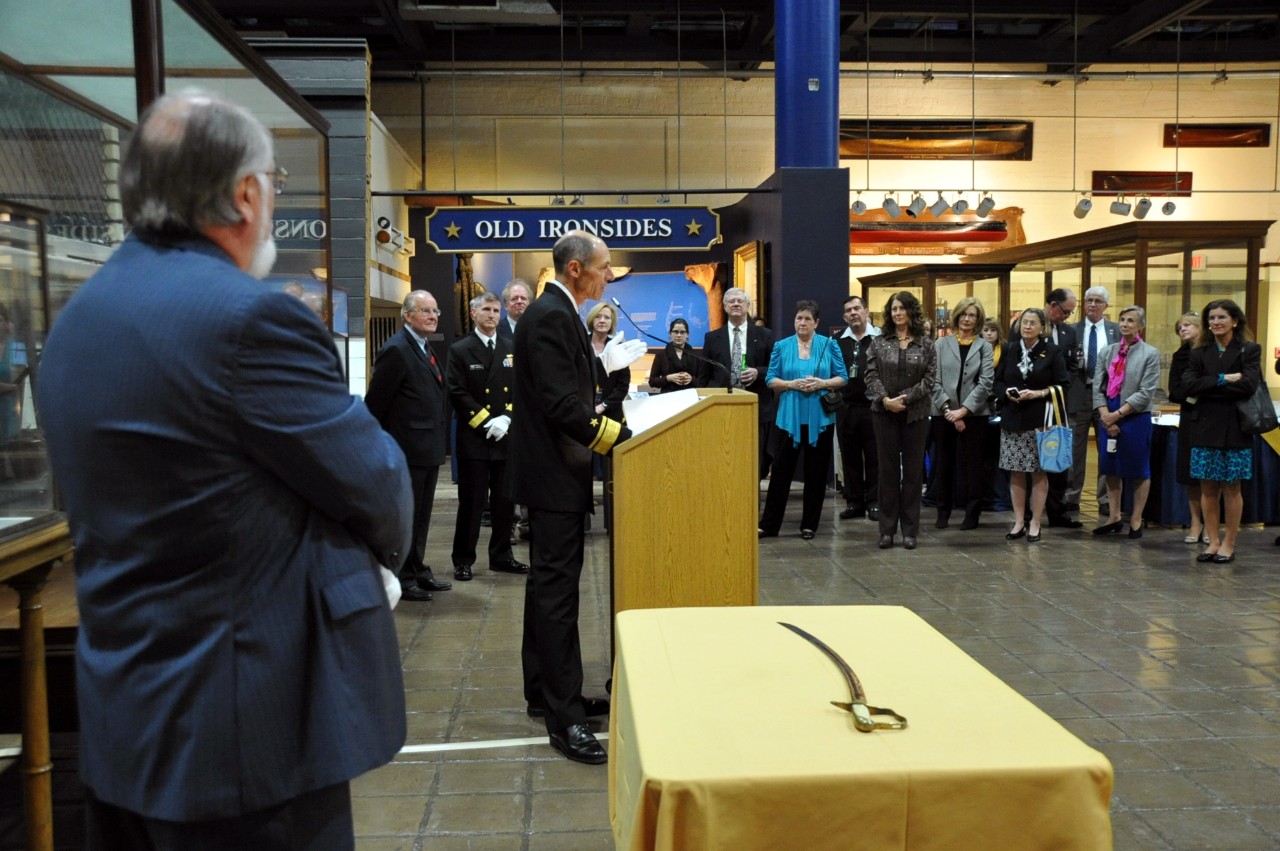 Caption: WASHINGTON (Oct. 20, 2014) Rear Adm. Michael Franken, center, acting chief of staff, Strategic Plans and Policy, Joint Staff, expresses his gratitude for the donation of the sword of Commodore Joshua Barney during a reception at the National Museum of the United States Navy at the Washington Navy Yard. Francis Hamilton, second from left, descendant of British Army Gen. Robert Ross, donated the sword to the United States Navy from his private collection during the reception the Museum hosted. (U.S Navy photo by Shejal Pulivarti/Released)

From The National Museum of the U.S. Navy

Francis Hamilton, descendant of British Army Gen. Robert Ross, donated the sword to the U.S. Navy from his private collection.

"Tonight we celebrate the return of the sword; a sword, surrendered in humiliation by naval Commodore Joshua Barney 200 years ago while trying to defend his nation's capital. In surrendering his sword, Joshua Barney was treated with the utmost respect and humanity," said Jim Bruns, director, NMUSN.

Barney led approximately 600 Sailors and Marines at the Battle of Bladensburg, Aug. 24, 1814, during the defense and burning of Washington D.C. The men charged with resisting the British threat by defending Bladensburg fought valiantly but were overcome by British troops. Barney, wounded and captured, surrendered his sword to Ross. Accepting the gesture, Ross provided Barney with medical aid and released him under parole. The symbolic sword has remained in the Ross family until now.

"Mr. Hamilton, on behalf of the United States Navy, I would like to extend my gratitude for your generous and thoughtful donation," said U.S. Navy Rear Adm. Michael Franken, acting chief of staff, Strategic Plans and Policy, Joint Staff.

Franken officially accepted the sword from Hamilton on behalf of the U.S. Navy and the American people.

The sword is featured as a part of the commemorative exhibit From Defeat to Victory, 1814-15. The exhibit, examining the last crucial year of the War of 1812 when the tide turned for American forces, will remain open through February. It highlights the honor, courage, and commitment of Sailors during that period of Naval history.

"Having heard that the exhibition was going to take place here, we decided to loan the sword to the museum. It's an American sword, it's the 200th anniversary of the battle, and the friendship between the two countries has endured, so it just seemed to us that donating it instead of loaning would be a nice gesture and an appropriate action," said Hamilton. "It's a huge pleasure for us to be a part of the bicentennial and to be able to add a piece of history to it."

After the official transfer of ownership, the museum director shared the importance of the event and artifact.

"What is significant about the Barney Sword is that instead of symbolizing loss, tonight this sword symbolizes an enduring friendship that has sustained the United States and Great Britain for two centuries," Bruns said. "Having Barney's sword on display in the museum will inspire our uniformed personnel and their civilian counterparts. Its simplicity attests to Commodore Barney's homespun courage and it will endow the citizens of the United States and Great Britain with a sense of our mutual history," Bruns said.

The sword joins only a handful of pre-1841 naval officers' swords in the Navy's collection.