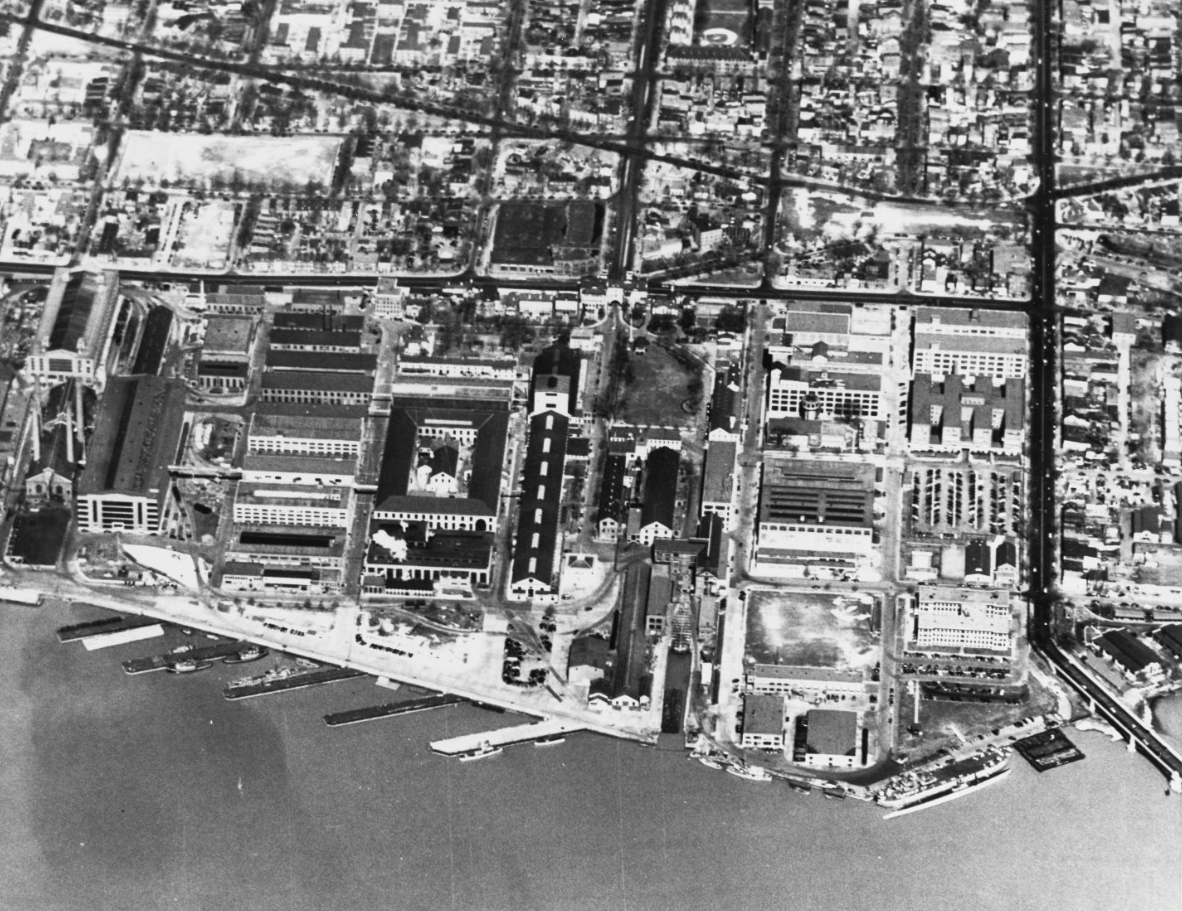 Aerial view of the Washington Navy Yard looking north from over the Anacostia River, 1949. The yard's eastern boundary, at 11th Street SE, is near the right side of the photo. In the image's upper left is 2nd Street SE; M Street SE, the yard's northern boundary, runs horizontally through the middle (NH 91943).

The Washington Navy Yard is the U.S. Navy's oldest shore establishment, in operation since the first decade of the 19th century. It evolved from a shipbuilding center to an ordnance plant and then to the ceremonial and administrative center for the Navy. The yard is home to the Chief of Naval Operations and is also headquarters for the Naval Historical Center and numerous naval commands.

The land was purchased under an act of 23 July 1798, with two additional lots being purchased in 1801. The Washington Navy Yard was established on 2 October 1799, the date the property was transferred to the Navy. The yard was built under the direction of Benjamin Stoddert, the first Secretary of the Navy, under the supervision of the yard's first commandant, Commodore Thomas Tingey, who would serve in that capacity for 29 years.

The original boundaries that were established in 1800, along 9th and M Streets Southeast, are still marked by a white brick wall that surrounds the Navy Yard on the north and east sides. The north wall of the yard was built in 1809 along with a guard house. After the fire of 1814, Commodore Tingey recommended that the height of the eastern wall be increased to ten feet, since along with the fire, looting by the local populace took its toll.

The southern boundary of the yard was formed by the Anacostia River, then called the Eastern Branch of the Potomac River. The west side was undeveloped marsh land. The land along the Anacostia was added to by landfill over the years as it became necessary to reclaim additional land for the Navy Yard.

The first years saw the Washington Navy Yard become the Navy's largest shipbuilding and shipfitting facility, with twenty-two vessels constructed there, ranging from small 70-foot gunboats to the 246-foot steam frigate Minnesota. USS Constitution came to the yard in 1812 to refit and prepare for combat action.

During the War of 1812, the Washington Navy Yard was important not only as a support facility, but was a vital strategic link in the defense of the capital city. As the British marched into Washington, holding the yard became impossible. Commodore Tingey, seeing the smoke from the burning Capitol, ordered the yard burned to prevent its capture by the enemy. Tingey's own quarters (now Quarters A) and the Latrobe gate were spared from the flames.

Following the War of 1812, the Washington Navy Yard never regained its prominence as a shipbuilding activity. The waters of the Anacostia River were too shallow to accommodate larger vessels, and the yard was deemed too inaccessible to the open sea. Thus came a shift to what was to be the character of the yard for more than a century: ordnance and technology. The yard boasted one of the earliest steam engines in the United States which was used to manufacture anchors, chain, and steam engines for vessels of war.

The Civil War again saw the yard become an integral part of the defense of Washington. Commandant Franklin Buchanan resigned his commission and went to Virginia to serve in the Confederate States Navy, leaving the yard to Commander John Dahlgren. President Abraham Lincoln, who held Dahlgren in the highest esteem, was a frequent visitor. The famous ironclad Monitor was repaired at the yard after her historic battle with CSS Virginia. The Lincoln assassination conspirators were brought to the yard following their capture. The body of John Wilkes Booth was examined and identified on the monitor Saugus, moored at the yard.

Following the Civil War, the yard continued to be the scene of technological advances. In 1886, the yard was designated the manufacturing center for all ordnance in the Navy. Ordnance production continued as the yard manufactured armament for the Great White Fleet and the World War I Navy. The 14-inch naval railway guns used in France during World War I were manufactured at the yard.

By World War II, the yard was the largest naval ordnance plant in the world. The weapons designed and built there were used in every war in which the United States fought until the 1960s. At its peak, the yard consisted of 188 buildings on 126 acres of land and employed nearly 25,000 people. Small components for optical systems, and enormous 16-inch battleship guns were all manufactured here. In December 1945 the Navy Yard was renamed the U.S. Naval Gun Factory. Ordnance work continued for some years after World War II until finally phased out in 1961. Three years later, on July 1, 1964, the activity was redesignated the Washington Navy Yard. The deserted factory buildings began to be converted to office use.

The Washington Navy Yard was also the scene of many scientific developments. Robert Fulton conducted research and testing on his clockwork torpedo during the War of 1812. In 1822, Commodore John Rodgers built the country's first marine railway for the overhaul of large vessels. John A. Dahlgren developed his distinctive bottle-shaped cannon that became the mainstay of naval ordnance before the Civil War. In 1898, David W. Taylor developed a ship model testing basin which was used by the Navy and private shipbuilders to test the effect of water on new hull designs. The first shipboard catapult was tested in the Anacostia River in 1912, and a wind tunnel was completed at the yard in 1916. The giant gears for the Panama Canal locks were cast at the yard. Navy yard technicians applied their efforts to medical designs for prosthetic hands and molds for artificial eyes and teeth.

The Washington Navy Yard was the ceremonial gateway to the nation's capital. In 1860, the first Japanese diplomatic mission was welcomed to the United States in an impressive pageant at the yard. The body of World War I's Unknown Soldier was received here. Charles A. Lindbergh returned to the Navy Yard in 1927 after his famous transatlantic flight. In the 1930s, Britain's King George VI visited the yard during his Washington stay.

Today the Navy Yard houses a variety of activities. It serves as headquarters, Naval District Washington, and houses numerous support activities for the fleet and aviation communities. The Navy Museum welcomes visitors to displays of naval art and artifacts which trace the Navy's history from the Revolutionary War to the present day. The Naval Historical Center is housed in a complex of buildings known as the Dudley Knox Center for Naval History. Leutze Park is the scene of colorful ceremonies. And inside the buildings, the Washington Navy Yard continues to serve the Navy and the nation.

A Walking Tour of Leutze Park

Diary of Michael Shiner Relating to the History of the Washington Navy Yard, 1813–1869