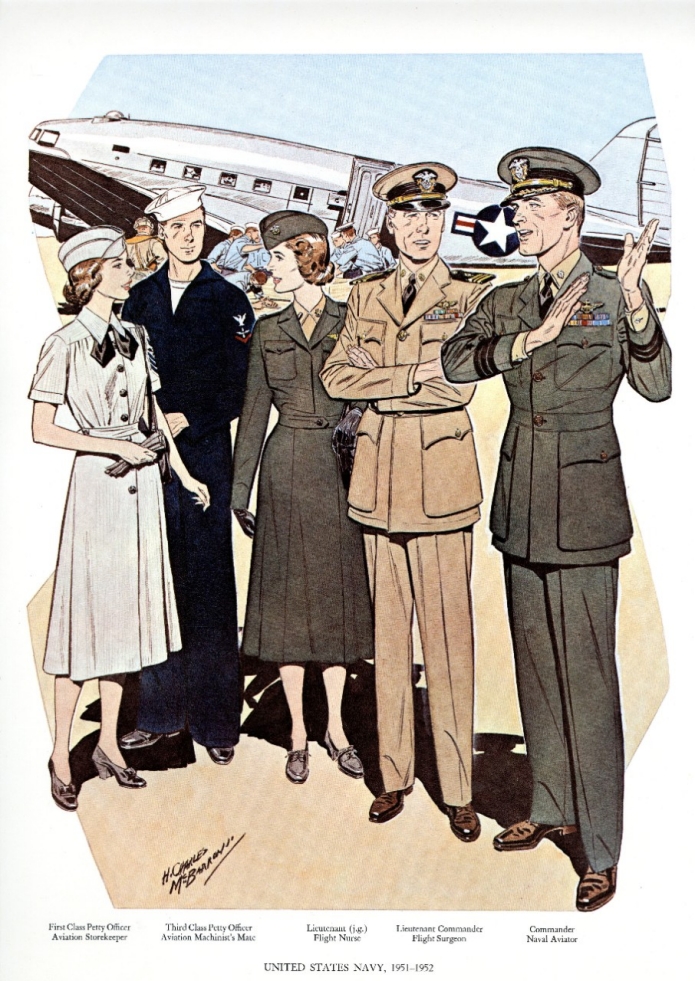 The first uniform instruction issued after World War II was dated 2 May 1947 and was approved by Secretary of the Navy Forrestal. Several general revisions of the 1941 Regulations had been released in an attempt to bring essential portions of the many times modified and revised instructions up to date. On 21 March 1947, all ships and stations were advised by the Bureau of Naval Personnel that, as soon as funds were available, a completely up-to-date uniform instruction would be released. The 1947 order was the long needed revision, but when it became available, it was evident that funds were limited! There were no illustrations as there had been for many years and the format was not so complete as earlier editions. Under the 1947 order, the formal type uniforms which had appeared in the 1941 instructions, and which had not been worn during the war years, were omitted. The blue and white service uniforms were to be used for the formal occasions. Under the heading of working dress, both khakis and grays were authorized. Chapter XI of the 1947 instructions covered the dress of the Navy Nurse Corps, but there was no mention of dress for the WAVES whose uniforms were covered in a separate publication. The first comprehensive and completely illustrated uniform regulation of the post-war period was that approved on 17 August 1951.

Under the 1951 order, all women officers, Nurses and WAVES, were covered in single chapter, No. 3. Enlisted women’s dress was in Chapter 13. In recognition of the excellent performance of women in the Naval Reserve and the continued need for their services in a time of unsettled world conditions, Congress on 12 June 1948, authorized regular status for women of the Navy, both officer and enlisted. Under the section on the dress of women officers, certain items of clothing were to be worn only by nurses. The items included ward uniforms with their accompanying blue capes and a special dress for flight nurses. The basic uniform for all officers, male and female, were the blue and white service with provision for working dress. Male officers were given a khaki service dress uniform for warm weather use. One change which indicated an easing of wartime restrictions was the inclusion in the 1951 order of an evening dress uniform for both male and female officers. The frock coat, which had served others of the Navy for so many years for full dress and dress until early in 1941, did not reappear in the 1951 instructions and probably never will. The elaborate dress uniforms of earlier times seem to have no place in the world of today.

The gray working uniform for women, made of gray and white seersucker, first introduced during the war, now took the form of a one-piece shirtmaker style dress with short sleeves. The gray working uniform of 1951 bears a close resemblance to the working costume for WAVES introduced in October 1943. Then a similar dress was specified but worn with a gray jacket. This 1943 change in the attire of women from blue to gray was concurrent with the introduction of the gray working uniform for male officers and chief petty officers. The First Class Petty Officer Aviation Storekeeper is in the gray working dress with four gray Navy buttons on the shirtwaist portion and three below the waist. The rating badge is worn on the left sleeve; the back edge of the badge being at the side view center line of the sleeve. The three chevrons and eagle of a first class petty officer and the specialty mark, winged cross keys, are all in dark blue embroidery. Under the 1951 order, all rating badges were to be worn on the left sleeve. Under the earlier instructions, men of the seaman’s branch showed their badges on the right sleeve and all others on the left. The dress is worn with a black silk necktie tied with a square knot. The gray garrison cap shows the hat device for all enlisted women of the Navy, other than chief petty officers. The gold foul anchor, superimposed on a silver three-bladed propeller, is the same insignia introduced in 1943 to serve as a corps device for all members of the WAVES. Black shoes and beige stockings were specified for wear with the gray seersucker working uniform.

The sleeves of the blue undress jumper for male enlisted personnel are cut square at the sleeve openings and do not display the three stripes of white tape worn on the two button cuffs of the dress jumper. In undress, the three stripes of white tape are omitted from the collar. The black neckerchief worn in dress, is not worn in undress. The rating badge of the Third Class Petty Officer Aviation Machinist’s Mate shown is worn forward of the center line of the left sleeve. The eagle and specialty mark are in white and the chevron in scarlet. The specialty mark of an aviation machinist’s mate, a winged two bladed propeller, dates from the early days of Naval Aviation, for it was first introduced in March 1918. The only difference between the World I mark and the current one is that today’s eagle looks to his right. This change from a left looking eagle to a dexter eagle occurred early in World War II and modified all naval insignia in which the American eagle appeared.

By a Bureau of Naval Personnel letter of 30 March 1945, an insignia for naval flight nurses was prescribed. The gold-plated winged metal pin was surcharged with the then current Nurse Corps device—the gold anchor, gold spread oak leaf and acorn. The device was to be worn on the left breast of coats or the one-piece working dress. A uniform for Flight Nurses developed rather slowly. In 1946 they were authorized to wear the blue slacks of members of the WAVES, and in 1947, blue slacks, a short-sleeved white or long sleeved blue shirt, a blue sweater and a blue garrison cap. Under the 1951 Regulations, the nurses’ flight uniform was to be forestry green in winter and khaki in summer, both of the same pattern. The jacket, single-breasted with a roll collar, peaked lapels and two patch pockets, was zipper closed. The buttons were the bronzed Navy eagle type worn by male officers entitled to wear the winter aviation dress. The jacket could be worn with a skirt of conventional length, or slacks, either green or khaki to match the jacket. The khaki shirt had a zipper closure extending diagonally from the collar to the lower right side and showed metal pin-on rank and corps devices on the collar points. Shoulder straps on the jacket were optional until 1 July 1952, after which they were mandatory. Metal grade devices, in this case, the silver bar of a lieutenant (junior grade) were worn on the straps near the arm seam. The garrison cap, khaki or green, shows a miniature officer’s device on the left, with the grade insignia on the right. The device of a flight nurse is shown on the left breast. The device of the Nurse Corps was changed in October 1948, the anchor and acorn being removed, leaving a gold spread oak leaf. It is to be noted that the wings of the flight nurse insignia are stylized, not the more conventional wings of the device worn by naval aviators.

Flight surgeons wore the same uniform as officers qualified as Naval Aviators, but their breast insignia showed the Medical Corps device, the gold spread oak leaf with a silver acorn. The background of the oval of the device is silver and the wings are stylized, as those Nurses who have qualified as Flight Nurses. The surgeon in the grade of lieutenant commander is shown in the khaki service uniform of tropical worsted or similar lightweight material. This uniform was specified for all officers and chief petty officers and served as a light weight aviation dress. Blue shoulder marks with gold lace grade stripes and a gold embroidered corps device are used to show both grade and specialty. In this case, there are two stripes of half inch wide gold lace with a quarter inch stripe between them and the oak leaf/acorn insignia of the Medical Corps above the stripes. The cap cover is of a khaki colored cloth of the same material as the uniform.

The winter aviation dress, worn by the commander, is basically the same forestry green uniform first authorized in 1925, then to be worn only with breeches and, after 1937, with trousers only. As under the original 1925 order, grade is indicated on the sleeves by means of black braid stripes. The three stripes of a commander have the black embroidered star of the Line above them. The bronzed buttons have survived only on the forestry green uniform, although once they were used on khakis. The green covered cap shows the gold embroidery of an officer of the grade of commander or captain. The breast insignia, the winged foul anchor, is identical with that introduced in October 1917 for the first qualified aviators of the United States Navy.