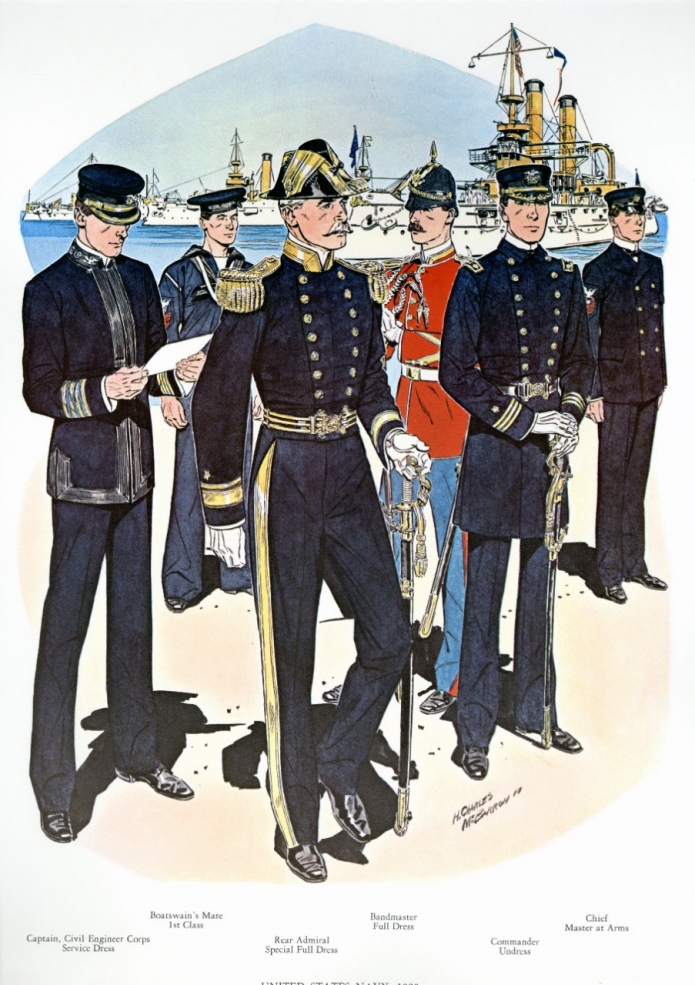 The latter part of the 19th century is to be remembered as the beginning of the “New Navy”, not only in the type of ships built, but also in a new concept of naval strategy needed to support a growing America and expanding world trade. The changes had a bearing on the dress of officers and men of the Navy. The long period of naval neglect which followed the Civil War ended when Congress in 1883 authorized the construction of four steel ships; the protected cruisers Chicago, Boston, and Atlanta, and the dispatch boat, Dolphin.

Staff officers, who had had their relative rank adjusted upwards during the Civil War and had been reduced to their pre-war status in 1869, were finally recognized by Congress in 1871 as an important part of the Navy and again had their relative rank adjusted upwards. Civil engineers, long a part of the Naval Establishment, were given relative rank in 1881. A Regulations Circular of 8 January 1885, grouped enlisted personnel into classes and established the ratings of first, second and third class petty officers, doing away with the former all-inclusive rating of “petty officer”. The rating of chief petty officer was established in September 1894.

In the painting, the captain, Civil Engineer Corps, is shown in the service dress uniform first introduced in 1877 to replace the sack coat of the Civil War. The light blue cloth between the gold sleeve lace follows the pattern established by the Navy in 1869 when all staff corps were assigned a colored cloth to be worn on the sleeves. A Uniform Circular of 24 August 1881, which prescribed the insignia for civil engineers, directed that the corps device be the letters C.E. in Old English and the sleeve lace light blue velvet. In using Old English letters as a corps device, the Navy reverted to the 1850’s when medical officers had an “M.D.” device, and pursers (paymasters), the letters “P.D.”. The corps device is shown behind the silver eagle of the captain’s relative rank on the standing collar. The cap visor is edged with a band of gold lace, not the gold oak leaves and acorns of the senior Line officers. The visor decorations were introduced in 1897.

The rear admiral’s body coat with tails, worn in 1898 as “special full dress” is a direct descendant of the coats of the early 19th century, and very like that specified in 1852 but dropped during the Civil War. The gold lace around the standing collar is an inch and three-quarters wide, and the trouser lace the same width. The same width lace was worn by commodores, while captains and commanders had inch and a half lace; lieutenant commanders, lieutenants and lieutenants (junior grade), one inch; ensigns, half inch. The sleeve lace, the two inch band, with a half inch strip above it, is used today to indicate a rear admiral in blues. The lace over the cockade of the cocked hat was an inch and a half wide for flag officers, captains and commanders, and narrower for the more junior officers. Only flag officers had gold lace on the fans of the hat. The trim of the dark blue full dress belt varies with rank—three quarter inch strips shown for flag officers, seven narrow strips of lace for captains and commanders, five one-sixteenth wide strips for lieutenant-commanders and lieutenants; and three for lieutenants (junior grade) and ensigns. Staff officers were the same full dress belts as officers with whom they had relative rank.

The frock coat worn by the commander in undress had for years been a standard item of an officer’s wardrobe. In 1898 it was worn for full dress with epaulets, laced trousers, cocked hat, full dress belt and sword; with plain blue or white trousers, epaulets, cocked hat, plain black belt and sword for dress. In undress, the coat was worn with shoulder straps, plain blue or white trousers, the cap, with cover to match the trousers, plain belt and sword. The visor of the cap shows the newly introduced gold embroidery for commanders and captains. Flag officers had, as they do today, an additional band of embroidery around the back of the visor. The cap device for all commissioned officers was the silver eagle and shield and the two crossed foul anchors, basically that employed today.

The dress of the 1st class boatswain’s mate follows the general pattern of the previous uniforms for enlisted personnel. The right sleeve shows the type of rating badge introduced in 1886 after classes of petty officers were instituted. The Vee of the chevrons contains the rating badge, the whole being surmounted by a spread eagle. The badge of a boatswain’s mate was two crossed anchors, the same as it is today. In 1898 fifteen specialty marks were all that were required to indicate man’s specialty while today, the Navy uses many times this number to indicate the many, many skills needed to man the ships and planes and to provide for the other naval activities. The boatswain’s badge on the right sleeve indicates he is a member of the starboard watch.

The most colorful uniform in 1898 was that of the bandsmen in full dress. The scarlet, single-breasted tunics were trimmed with white and yellow and the skyblue trousers had scarlet strips on the seams. The full dress helmet was identical to that of enlisted Marines, and the gilt helmet device was like that of the Army with a silver lyre superimposed. All bandsmen wore shoulder knots, those of bandsmen being trimmed with gold cord, while bandsmen had white mohair cords.

The use of a coat for certain leading petty officers was first introduced in 1862 for a few ratings. Under the 1886 regulations, all first-class petty officers wore double-breasted sack coats, either blue or white, with a blue visored cap or a straw hat. Their trousers were full bottomed like those of other enlisted men. When the rating of chief petty officer was created, the chiefs took over the coat of the 1st class and were permitted to wear trousers, cut like those of officers. The device on the cap, the letters U.S.N. in silver superimposed on a gilt foul anchor, was similar to that in use today. The master-at-arms, a member of the starboard watch, wears the three red chevrons, connected by a red arch which is perched a white eagle. The specialty mark, a five pointed star, is also in white. On white clothing, the chevrons and arc were red but the eagle and specialty marks in blue.

The ships in the background are from contemporary photographs and from left to right, represent the Protected Cruiser Columbus, Armored Cruiser Brooklyn and the Battleship Iowa. Prior to the War with Spain in 1898, the major ships of the Navy had white hulls and straw colored superstructures. During the war, slate gray was used.