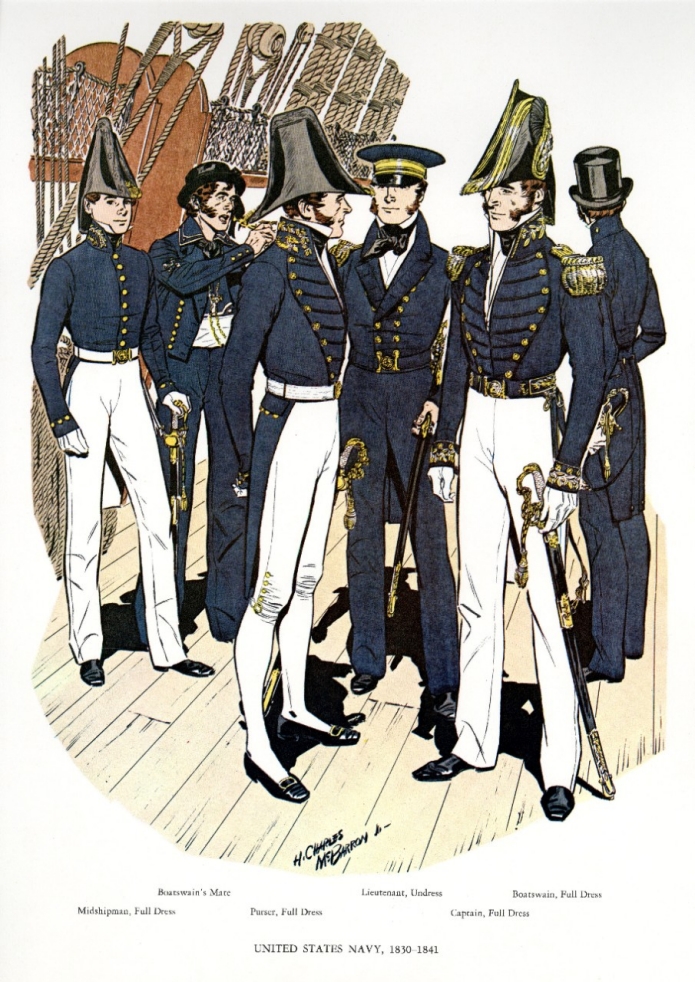 The current practice of prescribing one uniform for all officers of the United States Navy with a standard system of rank insignia and the use of devices to show the specialties of the staff officers was introduced in 1830 by a uniform order of 1 May. While it would take years for the present system to develop, a start had been made. The full and undress coats of the combatant officers from captain to master, and of the older staff corps, medical and purser, were identical in cut. As under earlier orders, the amount and location of gold embroidery was used in full dress to determine rank, but the introduction of corps devices made it easier to identify the non-combatant officers, The uniforms for chaplains, midshipmen, the forward warrant officers, schoolmasters and clerks were of a different cut, but easily recognizable as a uniform of the Navy.

The full dress uniform as worn by the captain and the purser in the illustration was cut with a swell and the lapels buttoned back, not across as they had been under the earlier order. The collar was decorated with an oak leaf and acorn pattern and in the case of staff officers, a corps device was employed. As one might expect, the full dress coat of a captain had the greatest amount of embroidery—collar, cuffs, and pocket flaps. A master commandant had decoration on the collar and cuffs only, while a lieutenant showed gold on the collar only. The junior sea officer, a master, had no embroidery, but did show a button on either side of the standing collar and laced buttonholes.

The band of collar embroidery was narrowed on the collars of surgeons and pursers to provide room for the specialty device. The two staff corps devices had a definite relationship to the officers’ specialties. Medical officers displayed the “club of Esculapius,” the Greek god of medicine, and pursers, the cornucopia, the horn of plenty. After all a purser was responsible for the rations, pay and operated the “slops store” which provided clothing for the men. Both pursers and surgeons had a row of live-oak leaves and acorns around their full dress cuffs. Assistant surgeons showed only three buttons on the cuffs. A uniform was ordered for chaplains, a “plain black coat, vest, and pantaloons … or black breeches.…”

The uniforms for midshipmen were of a different cut from that of other officers. The full dress coat was single breasted, lined with white. The standing collars were edged with a narrow band of oak leaf and acorn embroidery with a gold foul anchor on either side of the collar. Passed midshipmen, those in line for promotion, wore the same coat as lieutenants with a foul anchor and star on the collar. Boatswains, gunners, carpenters and sailmakers wore coats like those of the senior officers but lined with blue and with but eight buttons on each breast. The plain collar had a button on either side, and the sleeves were slashed, not cuffed.

In full dress, the senior sea officers, midshipmen, medical officers and pursers could wear either white knee breeches or white trousers. The forward warrant officers were directed to wear blue trousers, Officers, except the warrant officers, chaplains, schoolmasters, and clerks wore cocked hats in full dress. For captains and master commandants, the hats were gold laced with a loop of six bullions over the cockade. The other hats were bound with black and had a loop of lace over the cockade. Those not permitted to wear cocked hats wore either the round hat or a blue cap with a blue band.

For the first time a distinctive undress coat was prescribed—“dark blue cloth, lined with the same, rolling collar, and made according to the prevailing fashion of civilians of the time.”  These coats had the same button arrangement as the full dress coats. The undress coats for midshipmen did not follow the same pattern as that of their seniors. Passed midshipmen wore a single-breasted, standing collared coat with a white cloth anchor and star on the plain collar. Other midshipmen wore a short, single-breasted jacket with the white anchor on the collar. Medical officers’ undress coats had black velvet collars and cuffs—surgeons had a strip of half inch gold lace on the cuffs while the cuffs of assistant surgeons were plain. Pursers wore the same undress coat as lieutenants, the only difference being that they did not wear epaulets.

The forward warrant officers’ undress coat was short with eight buttons on the breasts; schoolmasters and clerks wore a single breasted frock coat with six buttons. In undress an officer could wear a round hat or blue cap. The cap bands were blue for all but the three senior line officers who had gold lace cap bands.

Although it would be years before the Navy would officially introduce a series of rating badges for petty officers, it is to be noted that the boatswain’s mate shown has crossed anchors on his jacket sleeve. A woodcut in the Naval Magazine of November 1836, shows a petty officer of the period with the device. It had long been the practice for men to add embroidery to their uniforms and in many cases the unofficial devices later became official.

Changes to the 1830 uniform instructions made further small steps toward uniformity. In 1832 the device of the Medical Department was changed to a branch of live-oak, and the black velvet facings were removed from the undress coats. In 1835 medical officers were permitted to wear gold lace bands on their blue caps. The same concession was made to midshipmen in 1838. While it would be many years before there would be a basic uniform with standard systems of rank and corps devices, the pattern was being set in the 1830’s.