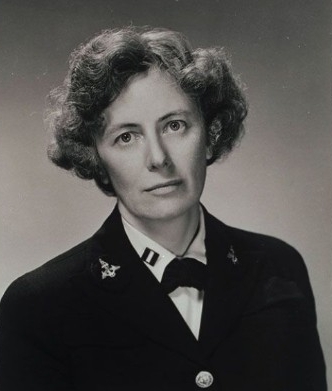 Elizabeth Reynard was the second in command of the Women Accepted for Volunteer Emergency Service (WAVES) during World War II. She was not only instrumental in helping formulate the women’s reserve (WR); she also invented the WAVES acronym.

When the Navy first began considering the idea of a women’s reserve during 1941–42, they called upon educators at the country’s most prominent women’s colleges to help them study how the new branch should be organized. Reynard, an English professor at Barnard College, was selected to be a special assistant to the chief of Bureau of Naval Personnel Rear Admiral Randall Jacobs. Her job was to study the best way to organize and administer the women’s reserve. Reynard worked on a plan for the program in conjunction with a women’s advisory council, chaired by Virginia Gildersleeve, dean of Barnard College. Reynard and Gildersleeve formed a close partnership as they shared research and ideas on the structure, regulations, and training program for the new reserve branch.

During the first months of World War II, Reynard traveled around the country visiting naval installations to determine what jobs needed to be filled and how women might be incorporated into the positions. She also traveled to Canada to inspect the women’s military services there. Additionally, she visited several U.S. universities to find locations for training schools for the new recruits.

Six days after President Franklin Roosevelt signed Public Law 689 creating the women’s reserve, Reynard was commissioned a lieutenant in the Naval Reserve on 5 August 1942. She was the second woman to be sworn in as an officer in the U.S. Navy. Lieutenant Commander Mildred McAfee, director of the WAVES, was the first.

Reynard went on to serve as the commandant of seamen at USS Hunter (the U.S. Naval Training School). During her tenure there, she oversaw the integration of the school’s first two female African American officers on staff, Lieutenant (j.g.) Harriet Ida Pickens and Ensign Frances Wills. The school went on to train 90,000 women during the war.