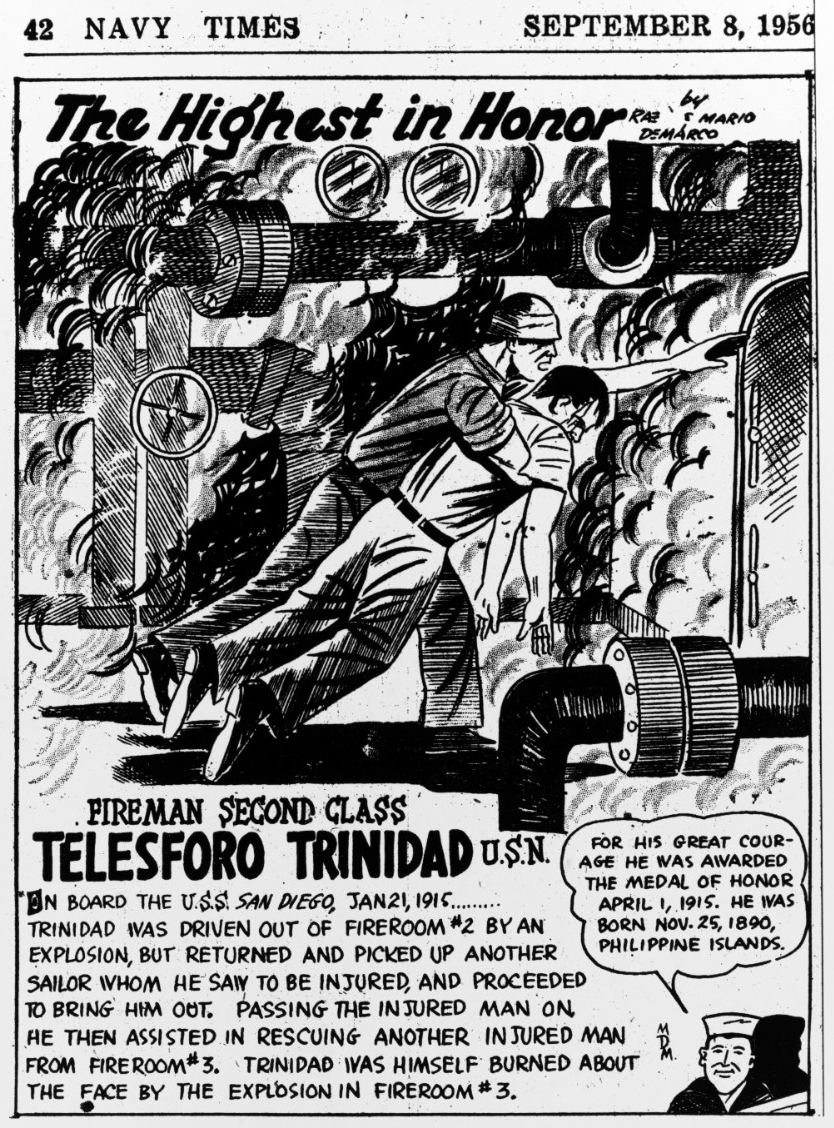 Vignette giving details on why Fireman Second Class Telesforo Trinidad received the Medal of Honor for actions taken on board USS San Diego on 21 January 1915.

In 1901, President McKinley signed an executive order to allow the enlistment of 500 Filipino Sailors into the U.S. Navy. Telesforo de la Cruze Trinidad was one of the Filipino Sailors who enlisted after Secretary of the Navy John D. Long signed General Order No. 40, which put McKinley’s executive order into effect. Trinidad was deployed on San Diego (Armored Cruiser No. 6) when, on 21 January 1915, an explosion in the ship’s no. 1 fireroom resulted in five Sailors killed and seven injured. The explosion caused a chain reaction in the other firerooms. Ensign Robert W. Cary, Jr., a recent Naval Academy graduate, held the doors between the firerooms open to allow Sailors to escape the blaze. Although Fireman Second Class Telesforo Trinidad was blown clear of the explosion, he ran past Ensign Cary back into the firerooms to rescue two other incapacitated Sailors. Trinidad suffered severe burn injuries to his face in doing so.

Trinidad received the Medal of Honor for his actions, along with Ensign Cary. Trinidad was also awarded a $100 gratuity for his bravery. His citation reads:

Even though the Philippines was separated from the United States in 1946, a 1976 report by Bureau of Naval Personnel, “Filipinos in the United States Navy,” notes a 1947 agreement between the United States and the Republic of the Philippines that has allowed continued voluntary enlistment of Filipinos into the U.S. armed forces after the separation. Tens of thousands of Filipinos have served in the U.S. military since McKinley’s executive order in 1901 (over 10,000 voluntary enlistees were listed in this report between 1944 and 1976). Fireman Second Class Telesforo de la Cruze Trinidad is thus far the only Filipino in the U.S. armed forces to receive the Medal of Honor.

Telesforo de la Cruze Trinidad died at the age of 77, on 8 May 1968. He is buried at Imus Private Cemetery in Imus, Philippines.